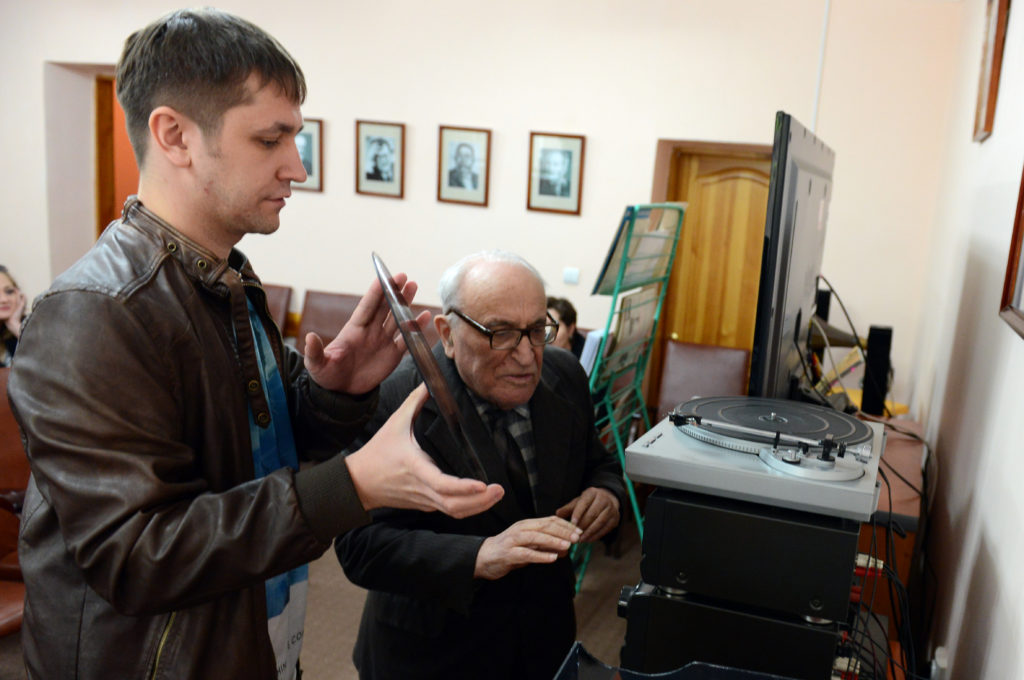 NUR-SULTAN – Musicologist Naum Shafer, who is also a professor, literary critic, writer and composer, has assembled the world’s largest collection of gramophone records (not to be confused with vinyl ones) in Pavlodar. The collection consists of more than 14,000 discs, some of which are the only saved copy in the world.

“Don’t divide music into the serious and frivolous. Music can only be good or bad. You can compose a magnificent simple song and trashy opera,” he likes to say.

The story began before Shafer was born when his parents received a gramophone and 30 records as a wedding gift in 1930. At the time, the family was living in Bessarabia, in the then Romania (now Chisinau, Moldova). As a child, he was more interested in the gramophone and records than toys.

Soviet troops entered Bessarabia in 1940. The following year, eight days before the war against fascist Germany began in June 1941, the Shafers were among many individuals deported to Kazakhstan. Representatives of the new government allowed each family to take no more than 100 kilogrammes of luggage.

The Shafers included the gramophone and discs among their possessions. Employees of the People’s Commissariat for Internal Affairs (NKVD), the name of the KGB in the early years of the Soviet Union, who evicted the family tried to forbid them from including the items. Apparently, they were taken with the miracle of technology, which was rare for the time.

Even as a youngster, Shafer realised he might eventually find the same gramophone, but perhaps not the records. He used the most powerful of children’s weapons – crying and tearful requests – to save his favourite things. Seeing this, one of the police officers urged his colleagues to disregard the instructions and allow the Shafers to take 100 kilogrammes of any luggage.

To this day, Shafer is grateful to the officer, as those 30 records became the basis of the collection. He also discovered the composer within himself. As a student, he performed his work “Evening Waltz” at an amateur art contest, where the jury included famous Soviet Russian composer Yevgeniy Brusilovskiy, who was working in Kazakhstan at the time and was very fond of the country’s music. He appreciated Shafer’s abilities and provided him with individual, complimentary instruction.

Brusilovskiy was delighted when he learned Shafer was collecting gramophone records, noting “you have no idea what you are doing!” He repeatedly appealed to the USSR Ministry of Culture to create music libraries throughout the country in addition to its many book libraries.

Shafer has collected more than 14,000 gramophone records in 50 years, buying them in stores, corresponding with collectors from many countries and exchanging discs with them. His wife, Natalia Kapustina, has always provided tremendous support. The couple agreed to use his salary for records and books and hers for everything else.

The collection now contains records issued on each continent from the end of the 19th century to the middle of the 20th century. It contains the sounds of nearly every nation, from folk music to classic symphonies.

His archive of 1930’s Kazakh music recorded on gramophone discs is the largest in the country. It also includes more than 10,000 vinyl records, in excess of 1,500 tape reels and compact cassettes. Shafer has written more than half a million cards, one for every song, allowing him to easily find each record.

With the help of local authorities, the Shafer house-museum was opened in Pavlodar in 2002. In addition to the recordings, it consists of more than 17,000 books and 64,000 newspapers and magazines since the 1930s. In excess of 100 issues by Russian writers and poets, printed in the 19th century, are the most valuable among the books.

In 2008, Paul Brummel, British Ambassador to Kazakhstan, visited the Shafer house-museum. He was pleasantly surprised by the presence of English records in the collection, which he had never seen even in the United Kingdom. He listened with pleasure to songs on the gramophone his grandmother sang to him in his childhood. At his initiative, the British Council in Kazakhstan published a booklet about Shafer’s house-museum in English. A portion of the information was included in the encyclopaedia of Kazakh museums, which the council also printed.

Collectors around the world have repeatedly appealed to Shafer to sell his collection, offering quite a bit of money for it, and high-level representatives from many Russian cities have offered the best conditions for moving the museum. Each is prepared to allocate a large building for the items and make it the pearl of their urban area’s cultural life.

The Mikhail Glinka State Museum in Moscow would like to acquire approximately 300 of Shafer’s recordings of the composer’s works to help complete its selection and museums in countries throughout the world would appreciate getting at least some of the recordings. Shafer loves Pavlodar, however, and wants to save his entire collection in the city for future generations.