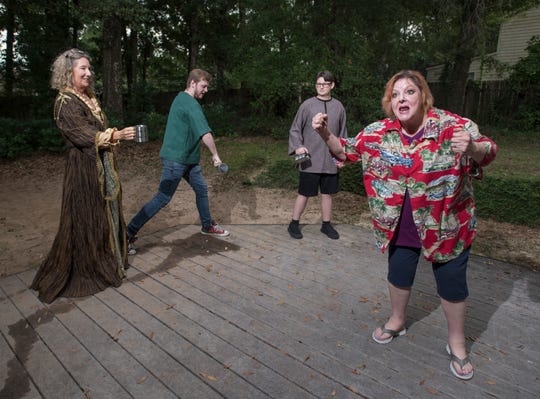 Connie Cali (as Mistress Quickly), from left, Gabriel Marsh (as Robert), Grey Wolfe (as John), and Kelly Shepherd (as Falstaff) perform as their Shakespeare company rehearses a scene from The Merry Wives of Windsor in Pensacola on Thursday, July 18, 2019. (Photo: Gregg Pachkowski/[email protected])

If “Brevity is the soul of wit” then the Southeastern Teen Shakespeare Company is having a way with the Bard’s beloved words. The local youth troupe is staging “Shakespeare in Shorts,” a condensed musical trilogy with its adult counterpart, First City Shakespeare.

“It’s meant to be fast-paced and fun,” explained director Michelle Hancock. “We’re on a mission to show Pensacolians what Shakespearean audiences already knew: the plays are full of physical comedy, action, and double entendres.” 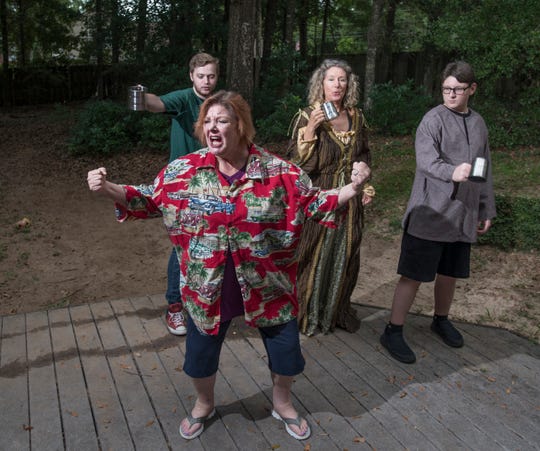 Kelly Shepherd (as Falstaff), clockwise from front, Gabriel Marsh (as Robert), Connie Cali (as Mistress Quickly), and Grey Wolfe (as John) perform as their Shakespeare company rehearses a scene from The Merry Wives of Windsor in Pensacola on Thursday, July 18, 2019. (Photo: Gregg Pachkowski/[email protected])

Known colloquially as SetsCo and First City, the companies will perform Aug. 9 and 10 at the Pensacola Opera Center. The program edits “Romeo and Juliet,” “The Merry Wives of Windsor,” and “Pyramus and Thisbe,” into 30-minute segments. “Shakespeare in Shorts” refers to its tight production as well as the cast’s casual dress: shorts on the bottom, doublets and puffy shirts up top. It’s also a summer project for the teens who wanted to infuse current pop culture into the half-millennia-old plays.

“That’s something that arose through the collaboration between them and me,” said Hancock, who also wrote the adaptations.

“The opening is a brawl when they duke it out,” Hancock said.

The tragic ending is paired with “If I Die Young” by The Band Perry.

“They’re fairly large plot points and you have to hit them all,” she explained.

In “The Merry Wives of Windsor,” the caddish Falstaff schemes to court two wealthy women. It’s interspersed with familiar hits by Bob Marley, Buddy Holly, and Sir Cliff Richards. “Pyramus and Thisbe” is a chaotic play tucked into “A Midsummer Night’s Dream.” 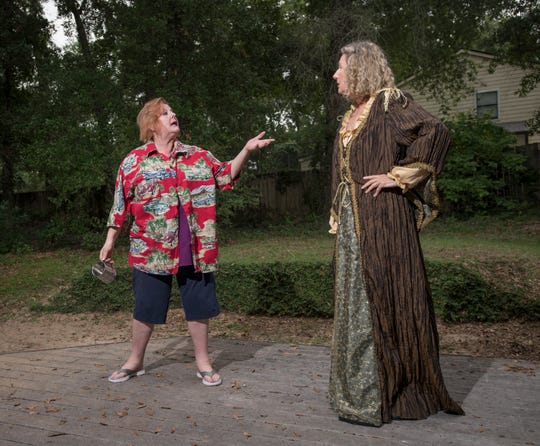 Kelly Shepherd (as Falstaff), left, and Connie Cali (as Mistress Quickly) perform as their Shakespeare company rehearses a scene from The Merry Wives of Windsor in Pensacola on Thursday, July 18, 2019. (Photo: Gregg Pachkowski/[email protected])

“It’s the right length, it’s self-contained,” Hancock said. “It’s broad comedy with a lot of physical stuff, a shambles from the beginning to the end.”

Founded in 2006, Hancock took the helm of SetsCo in 2009. She grew up mostly in Denver and studied drama on a scholarship at the College of Idaho. After acting stints in New York, Sarasota, and Atlanta, she taught in Mississippi for four years, and joined the Peace Corps. On the advice of a friend, she moved to Pensacola in 2008 for its range of performing arts.

“As far as the arts go, for the city of this size, having all of that is pretty impressive,” said Hancock.

But despite that assessment she noticed that Pensacola Little Theatre, the largest company in town, didn’t stage Shakespeare. In an almost theatrical twist of fate, SetsCo was on the chopping block after its director resigned.

“I happened to be standing at the right place at the right time,” she recalled. “I said, ‘You have a Shakespeare company you don’t want? I’ll take it.’” 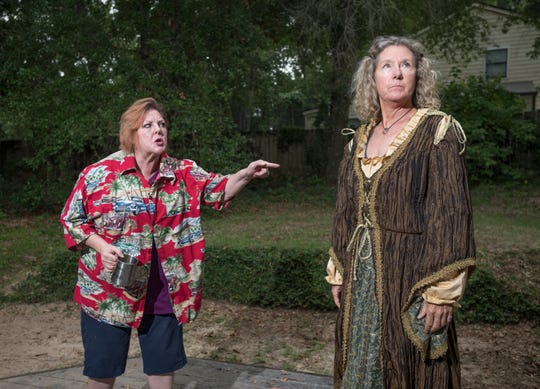 Kelly Shepherd (as Falstaff), left, and Connie Cali (as Mistress Quickly) perform as their Shakespeare company rehearses a scene from The Merry Wives of Windsor in Pensacola on Thursday, July 18, 2019. (Photo: Gregg Pachkowski/[email protected])

In 2013 SetsCo was incorporated as a non-profit. Two years later it was tapped by Winterfest to act out a Halloween iteration of its annual downtown Christmas tour. It served as a fundraiser and encouraged the company to spawn an adult off-shoot, First City Shakespeare. The Halloween gig dissolved but last fall the companies staged “Von Trapped in the Old Hospital,” a ghoulish version of “The Sound of Music” at the Sacred Heart Building in East Hill. Earlier this year they performed at Pensacon and the Gulf Coast Renaissance Faire, staged “Merry Wives of Windsor” at Rhodes Elementary School in Milton, and “Julius Caesar” at the Pensacola Opera Center. “Shakespeare in Shorts” concludes their current season.

“I’ve loved the chance to perform Shakespeare in traditional productions as well as these fun short adaptations,” said actor Auriette Lindsey, who is playing Thisbe.

Lindsey, a news producer by day, is a member of First City. She got into acting in high school and continued in college with a breakout performance in “Dear Ruth,” a wartime Broadway comedy at UWF in the late 80’s. In her youth, Lindsey had read “Shakespeare Tales,” a popular child-friendly digest and retained a connection. She jumped at the chance to join Hancock’s troupe.

“I couldn’t understand why people in school didn’t like it or thought it was hard,” she recalled. “Years later, I figured out that I hadn’t actually read the plays, but it was already in my mind!”

Stephen Lott, who’s been the chairperson for PLT’s Treehouse Theatre since 1997, has directed some of the SetsCo actors in other works.

“I think (SetsCo) provides excellent training for young actors who are serious about the craft of acting,” said Lott. “I have seen most of their productions, most recently their powerful take on Julius Caesar, which they made topical and relevant.”

After “Shakespeare in Shorts,” auditions for the next season will be held for the teen company while its current members who are turning 20 can matriculate to First City.  Hancock has to map out a new program, one that democratizes some of the most revered literature in the English language and cultivates local acting talent of all ages.

Tickets: $15 all seats, purchased through www.setsco.org