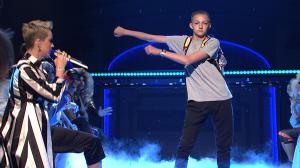 LAWRENCEVILLE, GEORGIA, UNITED STATES, October 30, 2018 — Russell Horning, who made a name for himself as meme-worthy Backpack Kid, uses his talent for dancing and his growing fame to encourage positivity. He openly rebukes racism and frequently gives back to the community by volunteering, giving the internet a role model for youth.

Still a teenager, Russell Horning has already made a tremendous name for himself online, on TV, on social media, and out in the dance halls and clubs of the world. Backpack Kid (as the internet calls him) is the popularIzed “flossing,” a wacky dance that you’ve likely seen before. For starters, Russell Horning performed his floss dance––accompanied by his faithful backpack––live on the SNL stage beside pop superstar Katy Perry.

Though he’s gained an international reputation in the last year or two, Horning’s danced for years. He says letting others actually see him dance came about during church camp, where he received a lot of praise and attention. From there, he decided the next step was to take his talent to the online masses through social media platforms like Instagram. With his signature dance, his iconic backpack, and his habit of speaking out against racism, he’s a fantastic, meme-worthy role model for today’s youth.

Russell Horning is different than most teenagers. He cares about togetherness and dances for all the right reasons. His style is comical and rubbery at times, hip-hop and exact at others. He’s young, but he’s already made an impression on the dance world and the internet alike. He doesn’t bother with what people are saying about his style of dance. “I’m just being myself and being original,” he says, commenting on the fact that most people don’t do comedy-style dancing like he does it.

Before his legendary appearance on the Saturday Night Live stage, another notable celebrity picked up on Backpack Kid’s talent for the spotlight. Rihanna saw one of Horning’s Instagram videos and reposted it on her own page as a reaction to her eight Grammy award nominations. Before that, another fellow Instagram star with over 700,000 of followers tagged Russell Horning for his iconic dancing.

Then Katy Perry, the meme-loving pop star, invited Backpack Kid to do his legendary flossing dance (also called “the Russell” by some) on stage with her during her “Swish Swish” performance during SNL. It was a legendary opportunity for someone as young as Horning, and the spotlight is well-deserved. Besides his frequent buzz-worthy posts to social media, Russell Horning is a regular volunteer in his community.

Last year, he performed for kids at the Zumba Instructors Convention, an annual celebration of Zumba instructors and the positive power of dance. He hopes through his involvement in the community that he can spread a little togetherness and do his part to end racism in America. With so few positive role models for youth today, Russell Horning stands out for his quirky talent and his love for all people, no matter their race or background.