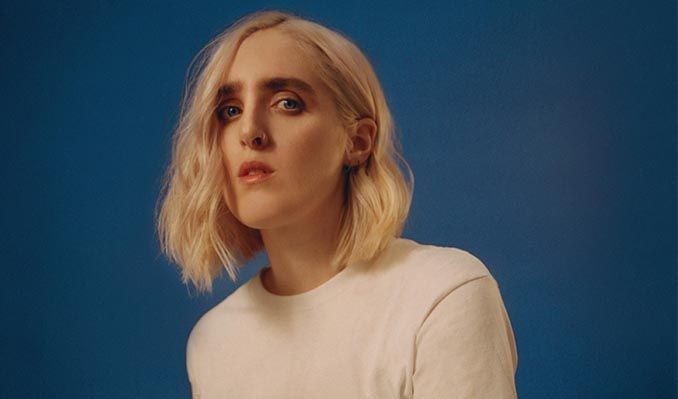 Shura performed at Music Hall of Williamsburg on Wednesday Oct 23 for her “forevher” album tour. Her dynamic performance reflected both optimism and love through her personal story. (via Secretly Canadian)

In a sea of flashing multicolor lights and vigorously dancing bodies, English singer-songwriter Shura fashioned a highly energetic and atmospheric concert experience for the last show of her North American “forevher” album tour.  Through a unique blend of colored lights reflecting a sea of synth and guitar instrumentals, her performance at Music Hall of Williamsburg became both a visual and aural celebration of movement, an energetic reflection of an album dedicated to optimism and love.

Shura’s opener, singer-songwriter Hannah Cohen, fused folk influences with modern electronic elements in a style that subtracted pop urgency in favor of moody sensibility. Cohen, on tour to promote her third album, “Welcome Home,” brought the transcendental California sound of Laurel Canyon’s glory days through echoing instrumentals that remained grounded with a resonant kick-drum. Cohen’s voice was the centerpiece of her set, enchanting with its ability to sustain mystifying high notes that rang clear and unwavering through the hall. Her final song, “This Is Your Life,” exemplified her talent as a singer with the vision to weave vocal delicacy into a pulsing rock soundscape.

Although Cohen’s lack of movement on stage contributed to a static audience prone at most to subtle swaying, she gave a very strong performance. Not knowing the words to her songs wasn’t a problem, as the music was melodically and instrumentally immersive; the lyrics are easy to catch onto, calming and simple.

The energy immediately crescendoed as the audience erupted in screams as soon as Shura and her bandmates sprang onto the stage. The stripped-down look of the trio — singer, drummer and synthesizer — was deceptively reminiscent of a smaller-scale show, but the performers quickly built up a multi-sensory experience as they began their set.  Shura picked up on Cohen’s 1960s-esque prelude and moved forward chronologically into the leftover sounds of 1970s disco, mixed with 1980s synth anthems, to create an effervescent dance party awash in blue light. Stage lights painted the hall in rotating combinations of blue, violet, green and magenta, their presence evoking the warm grain of a film photo.

It was a treat to see Shura in Brooklyn, the singer’s recently-professed hometown and the backdrop for many of the songs on her latest album.  In tribute to the borough, Shura opened with the slow song “BRKLYNLDN” and later introduced the track “forever” as a homage to Coney Island: the opening lines “Holy water wonder wheel / Single revolution / Got a ticket for two / We’ll take the G to paradise” are not-so-hidden references that pleased the New York crowd.

In between songs, Shura spoke about the experiences behind her lyrics, with a noticeable happiness that was as infectious as the dance beats.  Her interactions with the audience were natural; she responded to shouts of admiration and commented on her love of blue-themed clothes and hair to mirror the “forevher” album cover.

Even a sprinkling of slower songs throughout the set could not diminish the energy, which escalated towards a one-two punch finale of “Touch” and “White Light,” both off her first album, “Nothing’s Real.” The former, her most popular song, transformed into an audience sing-along, just before “White Light” ushered in strobe light energy that visually transformed the performance into what resembled a series of rapidly shot black-and-white photographs.  To celebrate the tour’s finale, Shura played a special encore: Cohen made a guest appearance as a backup vocalist for “tommy,” an emotional song about loss and love on the American road, before Shura closed with the album opener, “that’s me, just a sweet melody,” giving one final experimental, improvisational performance.

As she flipped between fast-paced, heart-thumping pop and slow introspective tracks, Shura never stopped giving a wonderfully emotional performance. The artist painted Brooklyn a brilliant blue, if only for the night.