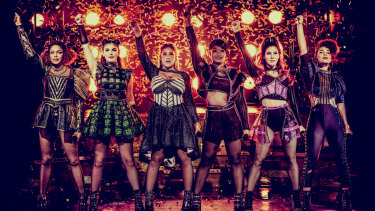 The premise of the piece is that Henry’s six wives have come together to form a girl band and compete to be the lead singer of the group by telling their individual stories. Think a history lesson through the medium of a reality TV singing competition.

As silly as the premise sounds, the spark-notes style recap of each of these significant historical figures has become a resounding hit with audiences in Edinburgh and London.

Six, a musical about the wives of Henry VIII, will premiere in Sydney in January 2020.

The show’s creators Toby Marlow and Lucy Moss were studying at Cambridge University when the musical theatre society decided to present an original musical at the famous fringe festival. The pair had four goals they wanted to achieve with the show they created.

And it seems they succeeded.

The show had a hugely successful run in Edinburgh, where producer Kenny Wax saw it and met with the creators to develop it for an off-West End season in London, followed by a full West End production. Last week it was announced the show would make its Broadway debut, but not before Sydney gets to see it.

Beyond the original Fringe season, Marlow said he couldn’t foresee the success the show would have. “I can’t quite believe it is still running in London, let alone on the other side of the world,” he said.

The show has drawn natural comparisons to the other history musical with modern tunes, Hamilton, and Marlow said he couldn’t be more delighted with the connection.

“I wrote my dissertation on Hamilton,” he said. “I think we have been so influenced by every musical that has taken something from history that the writer cares about and using a genre of music that people care about … Hamilton, Evita, West Side Story … but Hamilton has been a huge influence, we are the hugest fans in the world.”

Six will premiere at the Sydney Opera House in January.

Nathanael Cooper is the deputy entertainment editor at The Sydney Morning Herald and The Age.