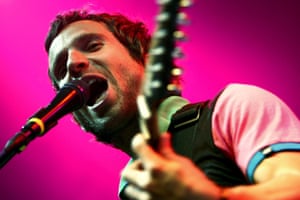 Felix Scoot and Lee Delamere, from one-time chart-toppers Felix & the Scootermen, arrive on space hoppers, launch into a dance routine and bounce up the aisles chanting “Fame is good!” They are presenting a motivational TED talk entitled Self-Help Yourself Famous, with a five-step plan to give us talentless no-marks a leg up the ladder to celebrity. We too could one day reach the dizzy heights of a guest feature with N-Dubz.

Over the course of this Edinburgh festival show, the motivational wheels (intentionally) come off. The bullet points are muddled by Broadway musical dream sequences, the arrival of a robotic sexual predator and Felix’s revelations about soiling himself live on BBC Radio 1. Between the illiberal use of tasers and bitter asides about their savage rivalry with Scouting for Girls, stains begin to appear on the gleaming veneer of fame: the shallowness, exploitation and precariousness of flash-in-the-pan success, the inability to complain “because you’re so lucky to be there”, the depths to which you’ll stoop to cling on for another 15 minutes and the delectation a bloodthirsty world finds in watching you fall.

By the end, the wannabe starlet may begin to suspect that the ladder to fame is built with the bones of a million Chicos, and leads to nothing but a long drop into psychological Armageddon. The show is a stark warning for an entire generation dreaming of Instagramming, YouTubing or sex-on-TVing their way to stardom.

Irwin Sparkes on stage with the Hoosiers in 2008. Photograph: Jean-Christophe Bott/EPA

“I remember the exact moment,” says the Hoosiers’ singer Irwin Sparkes, who plays Felix, recalling his own peak of success. “We came off tour, we got the text from our product manager saying: ‘Congrats! You’re No 1!’ We made a show about all these shameful things that happened to us along the way but this was one we couldn’t fit in, me looking at the phone and going: ‘The only way is down’. That was my first thought. What a dick! We’d tried so hard to get there but the anxiety I felt from ‘You’re No 1’! Who do I think I am, Michael Jackson?”

“That’s the brutal reality of mental health for us,” adds Delamere, AKA Hoosiers drummer Alan Sharland. “You go: ‘I’ve got everything I wanted and I’ve hit my peak yet I still feel sad’. It’s a horrible industry, it’s brutal.”

“We pretty much got dropped because our first single from the second album went to No 11 and they wanted Top 10,” Irwin recalls. “For us, you were picked up and dropped, you’re commoditised. There’s no duty of care. No one’s got your back, because you’ve got this very narrow window to clamber through. It’s not like we went to Afghanistan: we had a No 1 album, poor us. But the thing that you think would make you happy and be amazing can turn sour. It leaves you in this weird existential place of going: ‘This thing I’ve always wanted, I’ve tasted it and I’m still here’.”

A sideline to their continuing music career rather than a reboot, Self-Help Yourself Famous began life “at our zenith, so eight minutes into the summer of 2007”, when the pop-rockers topped the UK album chart with their debut The Trick of Life. In the wings of “a ridiculous show for a private members’ club”, Irwin wondered aloud to Jo Wiley why record labels don’t give their new acts a guidebook to dealing with fame. This Stardom for Idiots idea morphed into a potential memoir containing “anything we’ve learnt from this experience of being chewed up and spat out”, then into a comedy seminar on the pitfalls of success, inspired by the pair’s onstage banter. 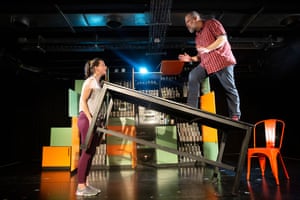 “It’s innate in us,” says Sparkes. “I still like to believe there are some people who come to our gigs and think the songs get in the way. That’s our one transferrable skill. It’s like, what can we do where we’d feel we had something to say, that we’d really enjoy and feel slightly fulfilled.”

“We had this big chat before we started,” Sharland adds: “If nothing comes of it, if we just get ridiculed and torn to pieces, we still did it, and that means more than not doing it.”

“We’ve gone back to the toilet circuit and we have died on our arses,” Sparkes says. “We had a great one where a dog stage-invaded. There was a moment straight after, when I had to play a dying robot and it hit me: I’m 40 years old, I’ve got a two-week-old, what am I doing? This is a terrible mistake.”

“I can see it from somebody outside,” says Sharland, “going: ‘Those wankers are just trying to jump on our bandwagon, this is theatre, what are you doing? It’s not your job. You’ve done music, piss off!’”

The Hoosiers’ dip into comedy leads something of an indie rock invasion of the Edinburgh festival. When I meet the writer and actor Luca Rutherford, she asks me for my best dance moves to incorporate into a show-opening routine. Having perfected my gormless pogo, she inadvisedly makes the same request of the man in the hat next to me, renowned in indie rock circles for his gravity-defying star jumps. For this is Maxïmo Park singer Paul Smith, making his theatrical debut as the pre-recorded radio DJ spinning newly written solo songs in the background of Unfolding Theatre’s latest fringe show. Hold On Let Go is a play exploring the transience of memory – personal, cultural and political – through the eyes of a woman who gets sucked by Instagram into a black hole full of everything she’s ever forgotten.

“Music is such a powerful trigger of memory,” director Annie Rigby explains. “People carry songs, they’re so meaningful to people in the stories of their lives … I’ve always felt with Paul’s songs, he writes very beautifully about the fragments of life.”

Involved from the development stage, Smith took inspiration for the show’s songs from the same memory games that inspired the plot, weaving tracks around his memories of inheriting porcelain ornaments from his grandmother, or lyrical phrases that emerged from improvisations. Did he have any fringe ambitions before?

“Absolutely not,” he grins. “It seemed very much like a different world. But last year I saw that the electronic artist Hannah Peel had done the music for a new production of Brighton Rock and Laura Groves, who I really like, was playing keyboards in it. I was thinking, wow, it’s a totally different way of doing things, you can go on the road and have that old-fashioned pit like in the cinema, have things crossing over. It does reflect the way that people listen to music now, where anybody can listen to anything through the internet. All of those boundaries are dissolving.” 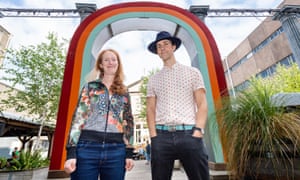 Does the lure of the fringe have anything to do with alternative acts being kept out of the singles chart by the populist tendencies of streaming algorithms, and having to seek out new avenues of recognition?

“On a practical level, it is hard to sell records,” says Smith. “Music’s free. There’s not loads of money in theatre, but it shouldn’t be a surprise that people are diversifying and doing other things.”

“It was one of the reasons I started doing it,” says Paul Vickers, one-time singer with Scottish art-rockers Dawn of the Replicants, who returns for his 10th fringe show this year with his surrealist variety puppet show Twonkey’s Ten Year Twitch, about a Dordogne cake shop manufacturing bad weather. A pioneer of the indie/fringe crossover, Vickers won the Malcolm Hardee award for Comic Originality in 2016, and has been touring Europe’s festival fringes since he began turning his onstage patter into Boosh-meets-Vic’n’Bob forays into the Twonkeyverse, generally involving murderous managers and a rather shabby Mothra. 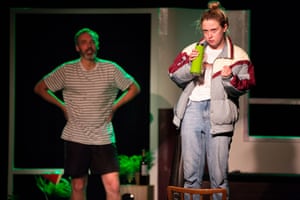 “One door opens as another one remains firmly closed,” he says, citing boredom with the rock’n’roll treadmill. “You want to do different things – a rock opera or concept album. Creating an album is creating a world, and doing a fringe show is similar in that sense – you’re creating a theatrical place. I started my fringe show as a hobby, I treated it like a scrapbook of ideas I could share with people.”

With alternative music increasingly being shoehorned back into underground clubs and fighting for attention below the mainstream radar, indie rock and the fringe seem natural bedfellows. “There’s a lot of crossover between these audiences,” says theatre director Eve Nicol who, alongside director Paul Brotherston, has worked with Belle & Sebastian’s Stuart Murdoch on a fringe show adapting their 1996 album If You’re Feeling Sinister into a heist story: a “busking musical … that feels within the world of Belle & Sebastian but telling these stories in a way they haven’t been heard before”. She says: “A theatre audience is not just a theatre audience – they also spend their time at gigs, and gig audiences go to other cultural events. So there’s a lot of natural crossover.”

Is there an element, too, of indie musicians relishing the idea of winning over tiny rooms again, like the old days? “I like the idea of going back,” says Alan Leach, drummer with Shed Seven, who is bringing his tablet-based comedy quiz to the fringe for the first time. “I’m the drummer so I’m never allowed to speak. Now I can gob off with my head held high.”