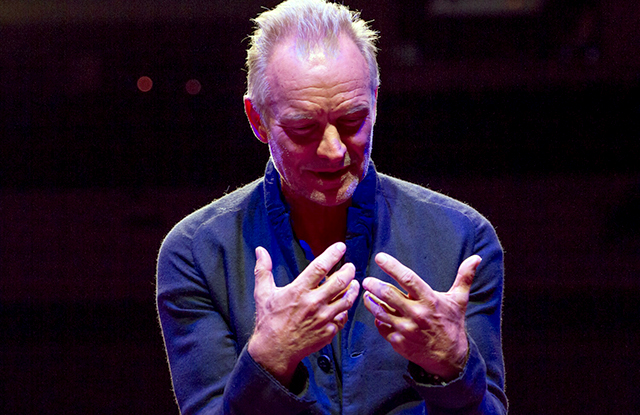 It felt surreal to be in the Ordway Concert Hall on Sunday afternoon while Sting played acoustic guitar and sang. With just 150 people in the audience – Ordway donors, subscribers and members of the media, all there by invitation only – it was an intimate and casual performance, laced with stories and laughter.

It must have felt surreal for Sting, too, or at least out of the ordinary. The event was a break from his current “My Songs” mega-tour, where he played most recently for thousands in Taos, 10,000 in Aspen and 18,000 at Ravinia outside Chicago. At the Concert Hall, accompanied by Rob Mathes on keyboard, he read lyrics from an iPad for songs he’d written but hadn’t sung for years. He muffed a few of them. This only added to his charm.

The lavishly awarded global superstar (the long list includes 18 Grammys, an Emmy, a Golden Globe, three Oscar nods and Kennedy Center Honors) was here to promote “The Last Ship,” his play-with-songs that will come to the Ordway next April for two weeks, with Sting in a starring role. This will be a reboot of a show that first opened in Chicago in September 2014 for a tryout, then moved to Broadway in October and closed after three months. It earned two Tony nominations – for Best Original Score and Best Orchestrations – but not the audience numbers it needed to continue.

Back then, “The Last Ship” was billed as a musical. Sting thinks “musical” sounds too frivolous. “It’s a play more than a musical,” he told his Ordway audience. “It’s a play with songs about a serious subject. It has a resonance everywhere in the world.”

The subject is drawn from the artist’s personal life. Sting grew up in Wallsend, England, a town whose lifeblood was shipbuilding. The closing of the shipyard in 1988 was devastating – similar to the closing of longtime GM plants in American towns and cities.

By that time, Sting was already post-Police and well into his successful solo career, with a string of hit albums that started with “The Dream of the Blue Turtles” (1985). But he felt the closing deeply and personally. Both of his parents died in 1989. His somber album “The Soul Cages” (1991) was his elegy to them.

Sting had known, even as a child, that shipbuilding was not his future. “It’s the last thing I wanted to do,” he said on Sunday afternoon. “I had other dreams. I would be a singer. I would be a songwriter. I would travel the world and be extravagantly rich. I must have dreamt that very hard.”

Sting described “The Last Ship” as “a whim, and the whim became a dream, and the dream was realized.” It also broke a writer’s block that had lasted several years. As soon as he started thinking about Wallsend and the people he had known there, names poured out of his memory, and characters, and stories, and songs. In 2014, the year the play was first produced, he also released an album by that name, his first original music in a decade.

Sting on “The Last Ship”: “It’s a play more than a musical. It’s a play with songs about a serious subject. It has a resonance everywhere in the world.”

Following Sunday’s concert, which included six songs from the show, we were allowed a few minutes of in-person interviews. We asked two questions, one each for writers and musicians.

MinnPost: Is there a difference to you between writing pop songs and writing storytelling songs, like the ones you wrote for “The Last Ship”?

It was a hard school I went to, throwing out my finest couplets. My best songs were thrown out onto the floor. But if it’s not advancing the narrative … I learned that. It’s a wonderful discipline, if you get it. The musical theater is strewn with bleached corpses everywhere.

It’s a very exacting art form, and one I respect. I’m not a stranger to it. As a child, my mother was a musician. She had all of the Rodgers and Hammerstein musicals. We never saw a musical, but they were in our record collection and I played them every day. “My Fair Lady.” “West Side Story.” My favorite was “Carousel.” So the musical theater is not something I suddenly arrived at, like a vision in Damascus. It’s something I knew. But my career moved another way.

MP: Looking back at the start of your solo career, could you talk a bit about your experience with [pianist] Kenny Kirkland and [saxophonist] Branford Marsalis and what you brought forward from that?

Sting: I left the Police and I decided I wanted to go back to my jazz world. I played in a big band as a kid, I played traditional jazz in a mainstream jazz group, a jazz-rock group. I wanted to explore that a little.

I met Branford and we got along like a house on fire. I said, “Who else can we get?” He said, “Kenny Kirkland is probably the best young player. He’s somebody Herbie Hancock worships and thinks is wonderful.”

They brought something to my music I couldn’t have anticipated or planned for. That spontaneous ability to create instantly. I really had to raise my game to stay in the game. I’ve always tried to hire or work with musicians who are better than me. That strategy has paid off. You have to raise your game to communicate, to share language. My drummer was Omar Hakim. I’ve had some great musicians around me. I’m only ever grateful. 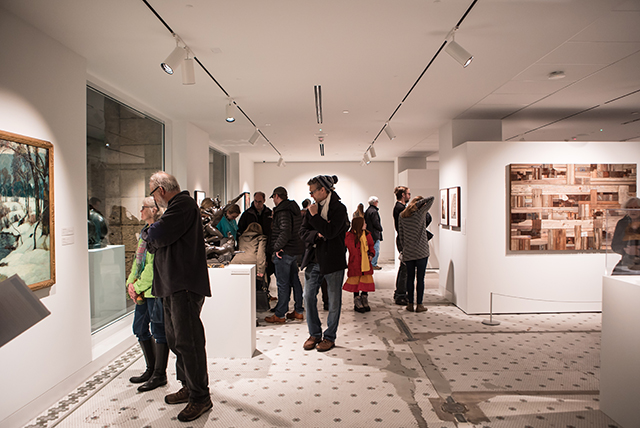 Courtesy of the Minnesota Museum of American Art

On Sunday, Knight announced that it will donate $1.5 million to the Minnesota Museum of American Art, St. Paul’s first and only art institution, to secure its new downtown home in the Pioneer Endicott building.

As we left the Ordway on Sunday, we passed the recently (and beautifully) renovated Rice Park. A large white tent had been pitched in its center, surrounding the fountain, which was topped with colorful flowers.

Within, St. Paul was celebrating its latest grant awards from the Knight Foundation, a strong supporter of the city.

Backing up a bit: In 2014, the Knight Foundation awarded $8 million for the arts to St. Paul. Of that, $3.5 million went to five arts institutions: the Arts Partnership (a nonprofit collaboration among Minnesota Opera, Ordway Center for the Performing Arts, the St. Paul Chamber Orchestra and the Schubert Club), Penumbra Theatre, Springboard for the Arts, the SPCO (separately) and TU DANCE. The other $4.5 million was spread out over four years of the Knight Arts Challenge, which solicited ideas from the community, and would eventually support more than 200 winning projects.

Earlier this year, Knight made a $1 million investment in Lunar Startups, a shared workspace and new venture collaborator launched by American Public Media’s Glen Nelson Center. It followed in June with another $1 million, this time for Springboard’s new location on the Green Line.

Why would the Miami-based Knight Foundation care so much about St. Paul? Because the foundation was created by John and James Knight, brothers and newspaper publishers whose Knight-Ridder corporation once owned the Pioneer Press. St. Paul is one of eight cities where Knight brothers once published newspapers, and where the Knight Foundation has offices.

On Sunday, Knight announced that it will invest $2.15 million to make St. Paul’s downtown and arts scene more vibrant, inviting and inclusive. Here’s where the money will go.

$1.5 million to the Minnesota Museum of American Art, St. Paul’s first and only art institution, to secure its new downtown home in the Pioneer Endicott building.
$200,000 to the St. Paul Downtown Alliance, to design and create a sustainable Business Improvement District downtown.
$100,000 to the St. Paul Public Library, to advance the work of the Nicholson Workforce and Innovation Center, which helps residents acquire technical skills and pursue career goals.
$50,000 to the City of St. Paul, to support its “Tech for All” initiative.
$200,000 to the Creative Enterprise Zone, to support the inaugural Chroma Zone Mural & Art Festival, happening now through Sept. 14.
$100,000 to Minnesota Opera, to support the creation and production of a new opera for youth performers, Kao Kalia Yang’s “The Song Poet,” based on a book about her father.

At the M, the $1.5 million will bring the total raised in its $28 million capital campaign to $25.2 million. The museum’s lobby will be renamed the John S. and James L. Knight Foundation Lobby.

The museum has had eight locations over the past 100 years. For a time, it looked as though it would sell its collections and close. It recently reopened in the historic building on Robert Street, an important cultural amenity in the city’s downtown core. Executive Director Kristin Makholm said in a statement, “Creating a permanent home for the M has always been seen as more than just building a new facility. We’re committed to creating a space where all are included and welcome.”

Jai Winston, Knight Foundation director in St. Paul, called this “a time of transformation in St. Paul, as our city claims its place as a lively, engaging urban hub. Downtown St. Paul is at the core of this change. Building on palpable local momentum, these investments aim to inspire new energy and interest in downtown and beyond, making the city a more attractive place to live, work, play and stay.”