AT just five years old, while still learning the fundamentals of talking and playing with other children, Samuel Medas began making music by pressing the black-and–white keys of the piano. He had no training in the instrument, but says that it was God who taught him what to do.

“I’ve been in music all my life,” 30-year-old Medas told the Buzz. His musical journey began when he was just that young inquisitive boy pressing the piano keys, but has now transformed to the point where he is a full-fledged recording and performing gospel artiste. 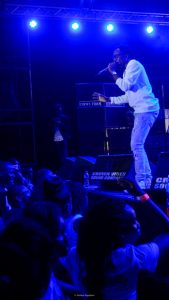 As Medas progressed into his more formative years, it was clear that his musical talent was bright as the “Star of Wonder” that guided the three wise men to the manger in Bethlehem, where Jesus was born. And, as he grew up, the young man found that his calling was in spreading the gospel of the Lord. Eventually, he would have made a career for himself by combining the two.

In the beginning, it was a bit of a struggle for Samuel to ‘break’ into the music industry, primarily because of the lack of finances. One thing he learnt, however, was that consistency is the key to anything.

“I’m grateful that my growth in music has been organic and gradual,” Samuel said, adding that he has been creating music that people, and not just the avid churchgoer, love.

More than that, he related that he is kept grounded by the fact that people love his music and he has to remain consistent if he is going to be effective in spreading the word of God.

In fact, he has been so consistent that after 10 years of producing music, he is reaping the benefits of ‘holding the faith’. He highlighted that he is being rewarded for his dedication by being booked in many countries all over the world, where he is able to travel and perform with other exceptionally talented artistes, His music is also available for streaming online, so he does have his fans around the world.

And importantly, last weekend he launched his fifth studio album- “Ready”, which he spent more than one year crafting and refining. This album is one which he hopes he can spread the word of the Lord through as well.

However, he said that he is not close to fulfilling his true purpose. Medas related that both he and his crew will start working with young people, outside of the stage and spotlight, in hopes of positively impacting them and also challenging them to live on purpose.

“I have to use my influence for good,” Samuel stressed.

In the meantime, he will continue fostering opportunities for young local artistes to travel and perform with him so that they could get that exposure they need to thrive as well.