George Joseph Msambure, founder and CEO of Oldschool Rides Tanzania, pictured in front of a row of classic cars outside of the Ongala Music Festival 2019, Bagamoyo, Tanzania, August 24, 2019. Photo by Amanda Leigh Lichtenstein, used with permission.

On a dusty road in the sleepy, coastal town of Bagamoyo, Tanzania, a row of vintage cars attracts festival-goers on their way to the 2nd annual Ongala Music Festival, held this year at the Bagamoyo College of Arts.

“Our elders, they had great cars! We’re trying to restore a love for the classics,” says George Joseph Msambure, the founder and CEO of Oldschool Rides Tanzania, a club devoted to restoring and celebrating vintage cars in Tanzania and the region. With 109 members and counting, those with a passion for vintage cars get together and talk shop about their 51 classic cars, including a 1938 Škoda. The group also organizes meet-ups and showcases their cars at various events, like the Ongala Music Festival — named after legendary Tanzanian musician Ramadhani “Remmy” Ongala, who died in 2010, at the age of 63.

“Remmy loved classic cars, and we want to respect that,” Msambure said. That’s why the club rolled up to the three-day music festival to showcase a few of the gems in their collection, from old school Volkswagen Beetles to the 1979 Volkswagen Kombi camper van and a 1970s BMW.

A group of about 10 Oldschool Rides members drove the cars from the bustling city of Dar es Salaam to  Bagamoyo, a town also steeped in history. 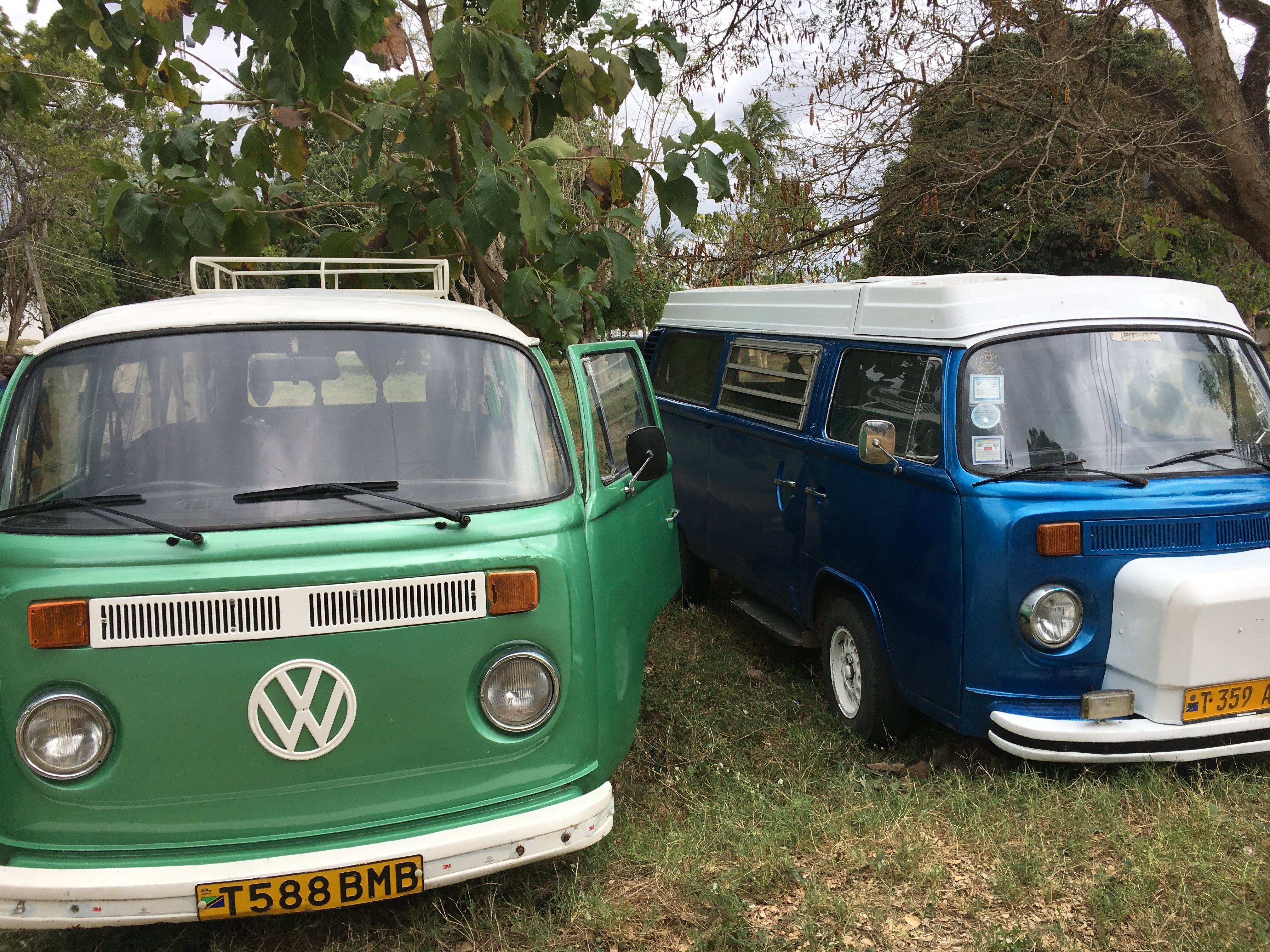 A green 1979 Volkswagon Kombi van and a blue 1977 Volkswagon camper van on display at the classic car show at the Ongala Music Festival, 2019, organized by Oldschool Rides Tanzania. Photo by Amanda Leigh Lichtenstein, used with permission. 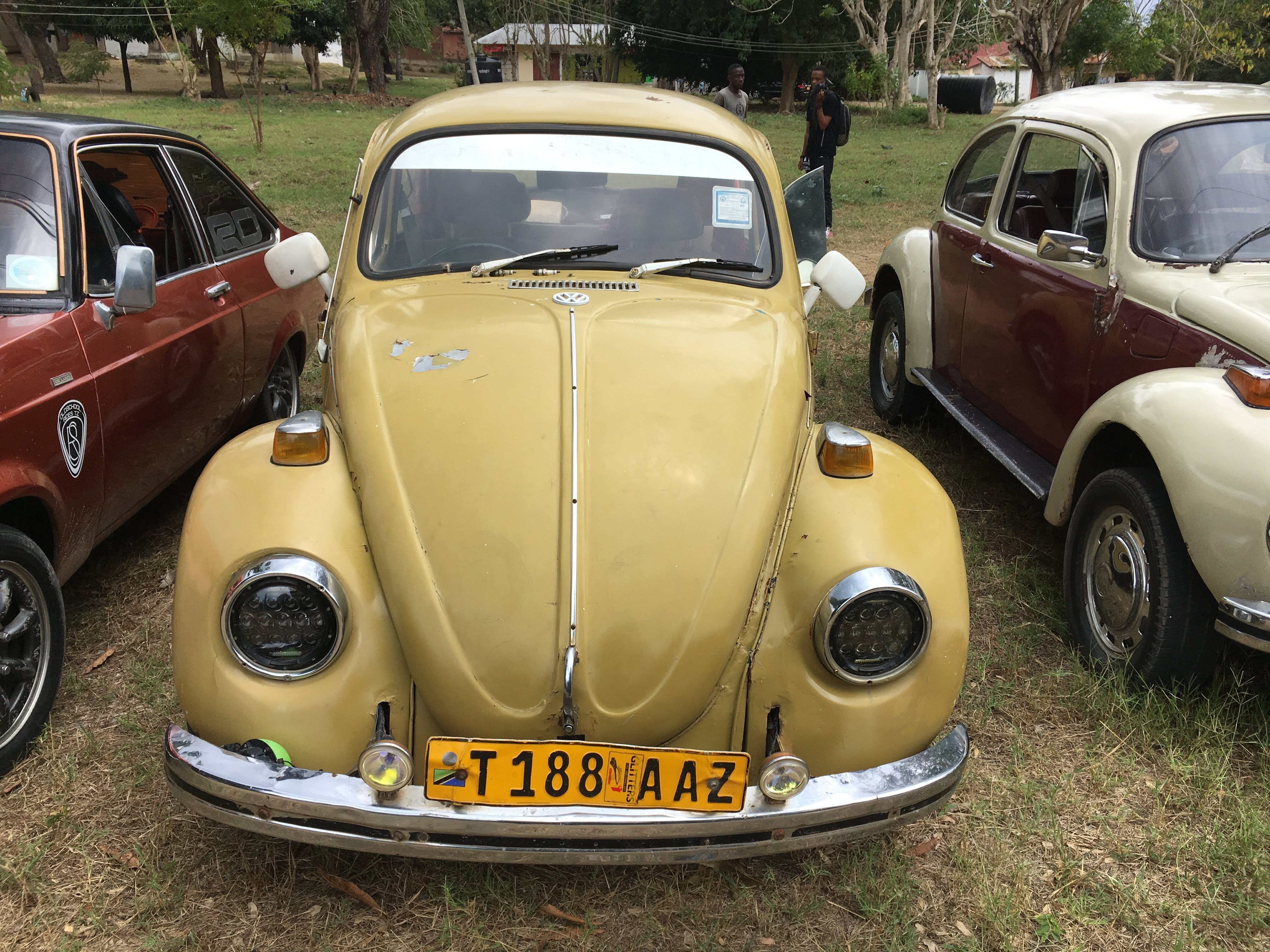 A 1973 Volkswagen Beetle on display at the Ongala Music Festival, 2019, organized by Oldschool Rides Tanzania. Photo by Amanda Leigh Lichtenstein, used with permission.

Ongala himself used to drive a white Renault around Dar es Salaam, Tanzania’s cultural capital, Msambure said. Ongala, lovingly known as “Doctor” for his epic Congolese rumba music with a message, wrote lines from his most popular song, “Mambo Kwa Soksi,” (Matter of Socks) on the back of his Renault, promoting the use of condoms to prevent HIV, according to the festival’s Facebook page. 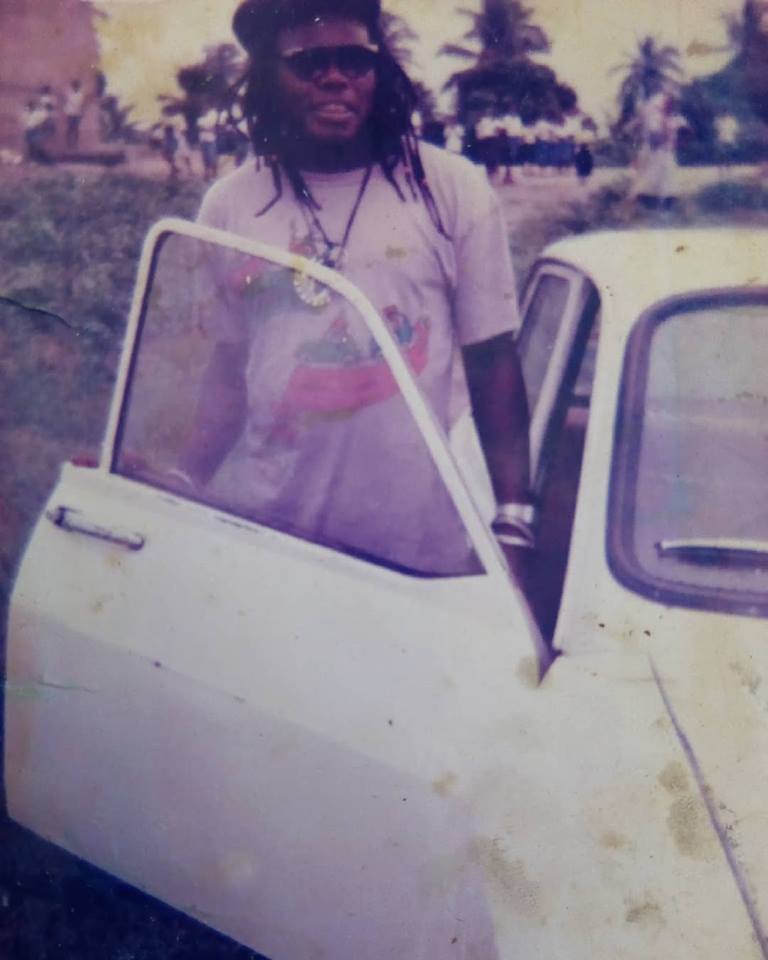 This picture was taken of Remmy Ongala in the late 80s with his old Renault. On the boot of the car, this message was painted: “Sukari yetu imeingia sumu mambo kwa soksi” or “Our poison has entered our sugar, wear a condom!” — lyrics from his most popular and controversial song. Courtesy of Ongala Music Festival via Facebook.

Originally from the Democratic Republic of Congo, Ongala moved to Tanzania in 1978 and joined his uncle’s band. He went on to become Tanzania’s most beloved rumba musician, taking political punches at elites in power while healing those in pain with words of hope in his lyrics. 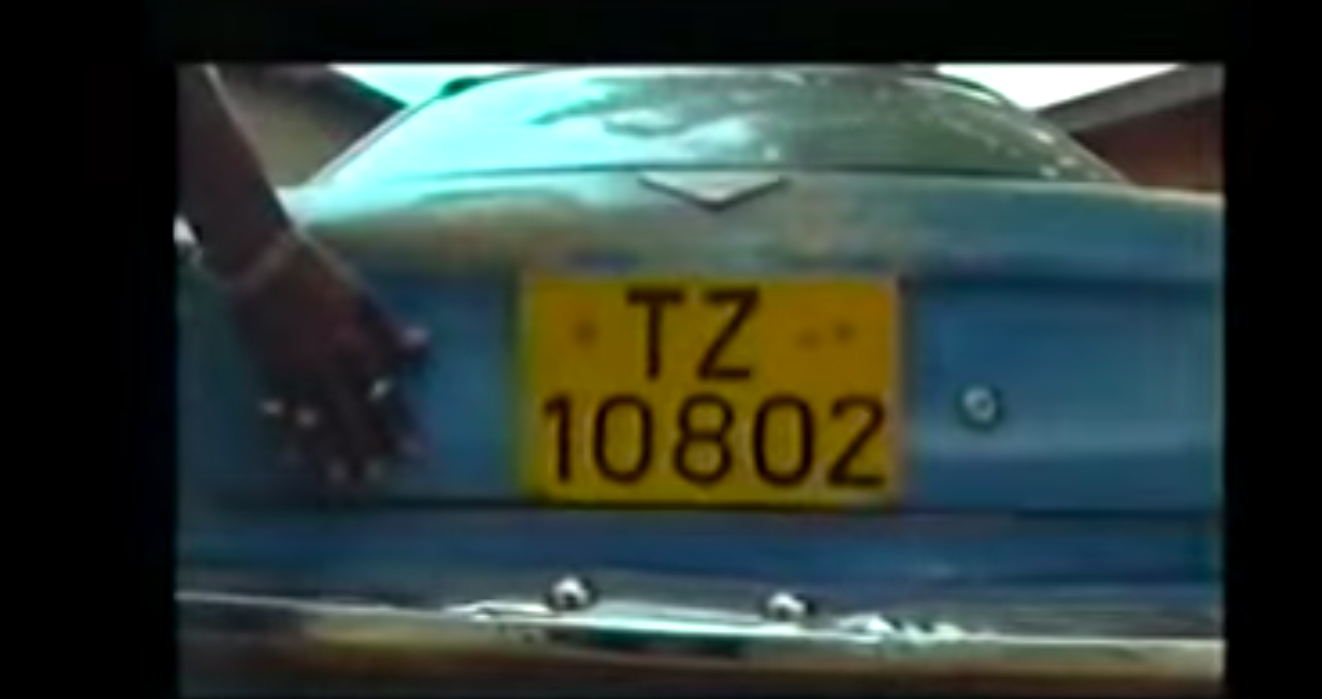 A screenshot of Remmy Ongala with his blue Renault as seen in the documentary “Bongo Beat,” directed by Jan Röed and shot in 1995/1996 in Dar Es Salaam, Tanzania.

Ongala was a man of the people whose charisma and soulful songs took him from the tiniest dancehalls and pubs of Dar es Salaam to the international stages of World of Music, Arts and Dance (WOMAD) in the United Kingdom, with songs like “Songs for the Poor Man,” and “The Poor Have No Rights,” which called attention to Tanzania’s widening gap between rich and poor in the once-socialist nation. 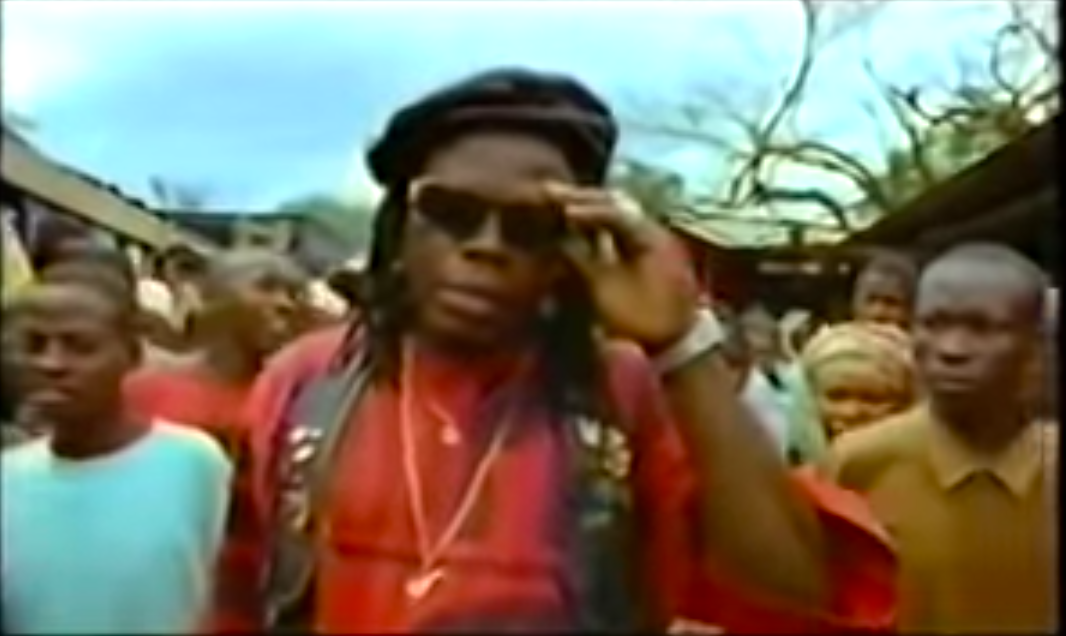 Screenshot of Remmy Ongala in the streets of Dar es Salaam in the 1995/96 documentary, “Bongo Beat,” directed by Jan Röed and shot in 1995/1996 in Dar Es Salaam, Tanzania.

For Msambure, who organized the Oldschool Rides car show at the Ongala festival 2019, showing off these cool classics is about changing perceptions of value, worth and status:

“Before, these classic cars were ignored — they were considered cars for poor people who couldn’t afford the new ones. I want to remove that idea from the heads of the people. I want to say these cars are actually the most valuable in the world!” — George Joseph Msambure, Oldschool Rides Tanzania

In fact, vintage cars are making a comeback in Tanzania, where cruising around in a restored classic is a new kind of status symbol. That mint-green, 1979 VW Kombi? Msambure said it may look familiar because it appeared in a recent music video called “Nishikilie” (“Hold Me” in English) with Tanzanian music stars Ali Kiba, Willy Paul and Omi Dimpoz.

Screenshot featuring the VW Kombi in the music video “Nishikilie” by Ali Kiba and other Tanzanian musicians via YouTube.

“To get [a classic] to be roadworthy, you have to put money into it, get parts from the United Kingdom, United States, Kenya. Some of the cars, we also order from Libya or Egypt. The cost of getting them here is one thing, maintenance is another. Not every mechanic knows how to fix an old classic. It’s expensive!”

Msambure, who remembers loving vintage cars since he was a kid, said he’s thrilled to see his passion bring so much joy to those who appreciate these restored relics of history.

“Even the ladies — Before, they wouldn’t mind much about classic cars. But now, they convince men to take a classic car for a day for a photo or video shoot, you know, for their weddings. Right now, it’s becoming like a fashion.”

Oldschool Rides has a huge following on Instagram with over 20,000 followers, attracting those who are passionate about all things vintage — not just cars but antiques like musical instruments and cameras. The club intends to expand with big plans for a classic car drive to Arusha and special events in Dar es Salaam.

These classic cars are portals to Tanzania and East Africa’s past. “It’s because of [our elders’] great work that we are here today and [these cars] are an [example] of their hard work,” Msambure said.

“We believe in legacy, that old is legend and legends are forever — immortality is their fate,” he added.

While festival-goers celebrated Remmy Ongala as a legend in his own right, viewing these vintage cars restored to their full glory tapped into a collective nostalgia for the past, transporting us back to the sounds and songs that shaped us.