Taylor Swift has revealed that she has been banned from performing her own songs by the man who bought her back catalog and the owner of her record label.

The singer, in an explosive post on social media, asked her fans to contact Scooter Braun and label boss Scott Borchetta to force them to rethink their decision.

She claimed that they have told her she cannot perform her old songs on TV because it would constitute a re-recording, which she is not allowed to do until next year.

This means that she will be unable to perform a planned medley of her greatest hits at the American Music Awards next Sunday where she is due to receive Artist of the Decade.

They have also denied permission to use her old songs on a Netflix documentary that has been two years in the making.

Swift claimed that Big Machine Records founder, Borchetta, and music executive Braun – who rose to prominence managing Justin Bieber – have effectively told her ‘shut up or you’ll be punished’

Braun controversially bought the label this summer and acquired rights to Swift’s old music, in what she previously described as her ‘worst-case scenario’. 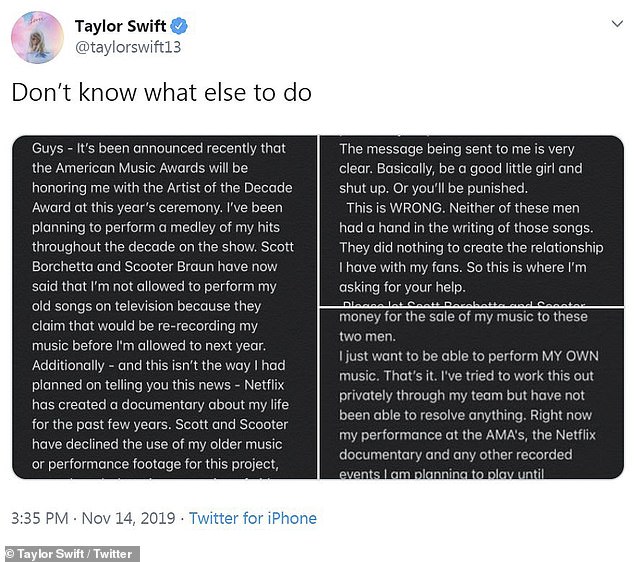 In a post captioned, ‘Don’t know what else to do’, Swift, 29, said: ‘Scott Borchetta and Scooter Braun have now said that I’m not allowed to perform my old songs on television’ 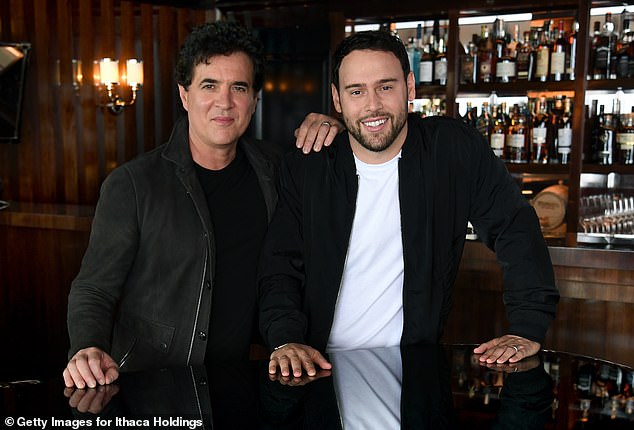 In a post captioned, ‘Don’t know what else to do’, Swift, 29, said: ‘Guys – It’s been announced recently that the American Music Awards will be honoring me with the Artist of the Decade Award at this year’s ceremony.

‘I’ve been planning to perform a medley of my hits throughout the decade on the show. Scott Borchetta and Scooter Braun have now said that I’m not allowed to perform my old songs on television because they claim that would be re-recording my music before I’m allowed to next year.

‘Additionally – and this isn’t the way I had planned on telling you this news – Netflix has created a documentary about my life for the past few years. Scott and Scooter have declined the use of my older music or performance footage for this project, even though there is no mention of either of them or Big Machine Records anywhere in the film.’

In August, Swift revealed plans to re-record albums 1-5 in a chat on Good Morning America.

‘Something that’s very special to me about this album is it’s the first one that I will own,’ she began about her new release Lover. ‘My contract says starting from November 2020 I can start re-recording albums 1-5.

‘I think artists deserve to own their own work. It’s next year, I’m gonna be busy.’ 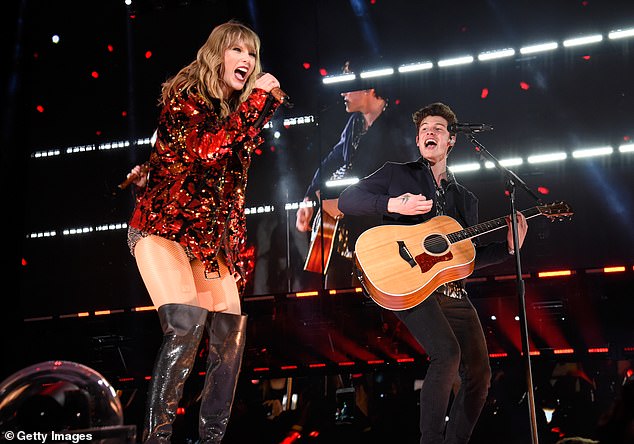 Swift said about a forthcoming Netflix documentary that she announced Thursday: ‘Scott and Scooter have declined the use of my older music or performance footage for this project’ 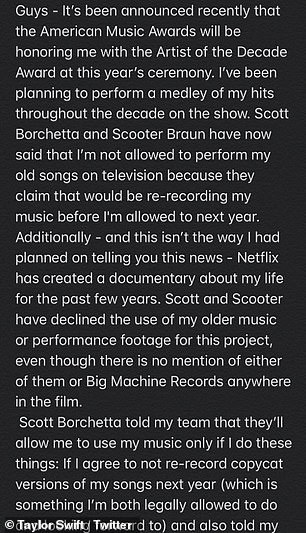 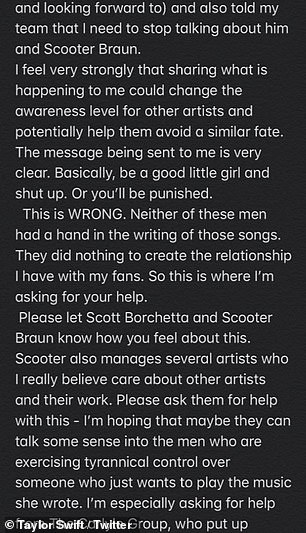 Swift said re-recording next year is something she is ‘legally allowed to do’. She summarized the spat as them telling her: ‘Basically, be a good little girl and shut up. Or you’ll be punished’

She had previously fumed to CBS Sunday Morning that she couldn’t believe who Borchetta sold her music to because they had had ‘numerous conversations about Braun’.

Swift was signed to Big Machine in 2006 for her first six albums but she went to Universal Music for her seventh release, Lover.

She quipped about the $300million acquisition by Braun’s Ithaca Holding: ‘But he has 300 million convenient reasons.’

In a June blog post, she said for years she pleaded for a chance to own her work but was only given an opportunity to sign back up to Big Machine Records and ‘earn’ one album back at a time, ‘one for every new one I turned in’.

She claimed she ‘walked away because I knew once I signed that contract, Scott Borchetta would sell the label, thereby selling me and my future’.

On Thursday, she shared that she has faced obstacles since then.

‘Scott Borchetta told my team that they’ll allow me to use my music only if I do these things: If I agree to not re-record copycat versions of my songs next year (which is something I’m both legally allowed to do and looking forward to) and also told my team that I need to stop talking about him and Scooter Braun,’ Swift continued Thursday.

‘I feel very strongly that sharing what is happening to me could change the awareness level for other artists and potentially help them avoid a similar fate.

‘The message being sent to me is very clear. Basically, be a good little girl and shut up. Or you’ll be punished.’ 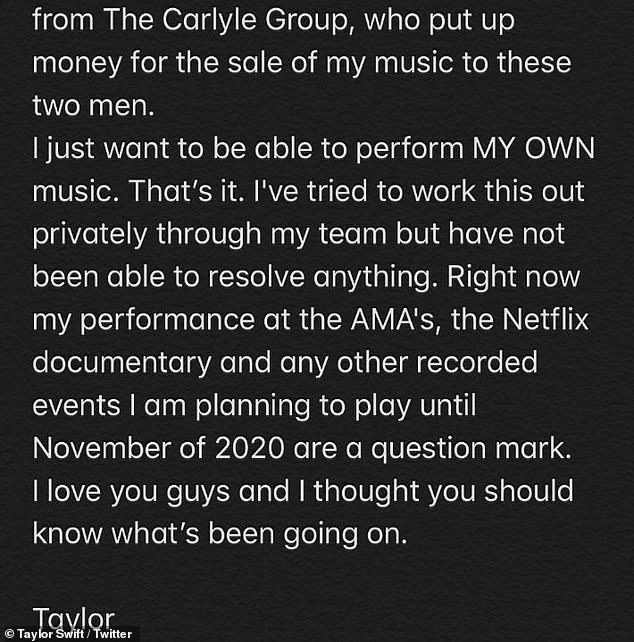 Swift added: ‘Right now my performance at the AMA’s, the Netflix documentary and any other recorded events I am planning to play until November of 2020 are a question mark’ 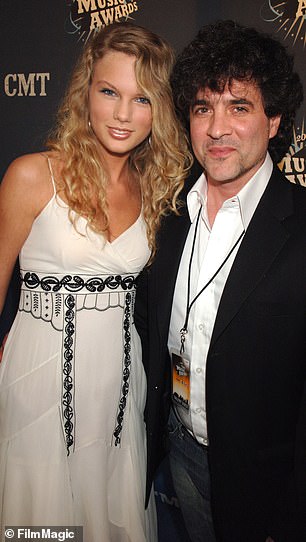 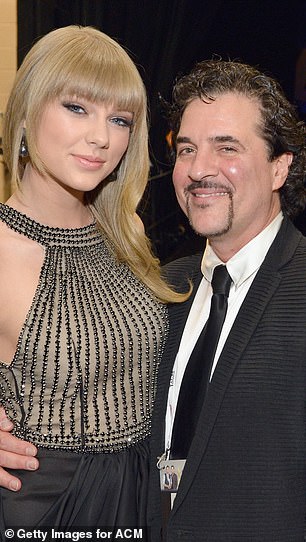 The Shake It Off hitmaker went on to plead with fans to fight on her behalf.

Braun has worked with the likes of Ariana Grande and Demi Lovato. She also called on her fellow artists to speak out.

‘This is WRONG. Neither of these men had a hand in the writing of those songs. They did nothing to create the relationship I have with my fans. So this is where I’m asking for your help,’ she wrote.

‘Please let Scott Borchetta and Scooter Braun know how you feel about this. Scooter also manages several artists who I really believe care about other artists and their work.

‘Please ask them for help with this – I’m hoping that maybe they can talk some sense into the men who are exercising tyrannical control over someone who just wants to play the music she wrote.’

With the rights to masters from Swift and other artists on their roster, the Big Machine Records catalog is estimated to be worth $1billion. Reba McEntire, Thomas Rhett and Rascal Flatts are some of the artists on the label.

‘I’m especially asking for help from The Carlyle Group, who put up money for the sale of my music to these two men,’ the Love Story singer added. ‘I just want to be able to perform MY OWN music. That’s it.

‘I’ve tried to work this out privately through my team but have not been able to resolve anything.’ 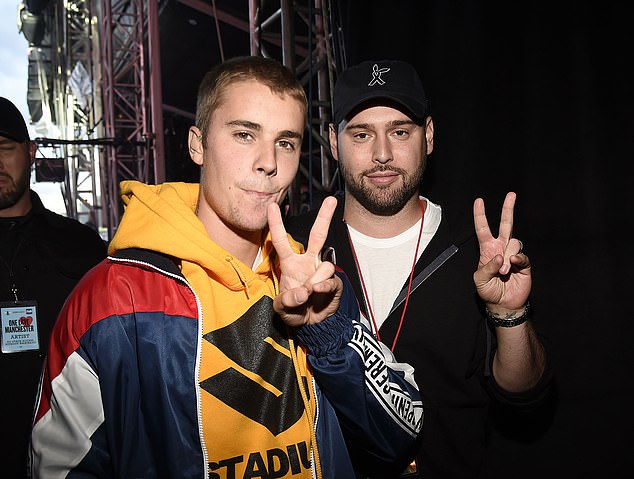 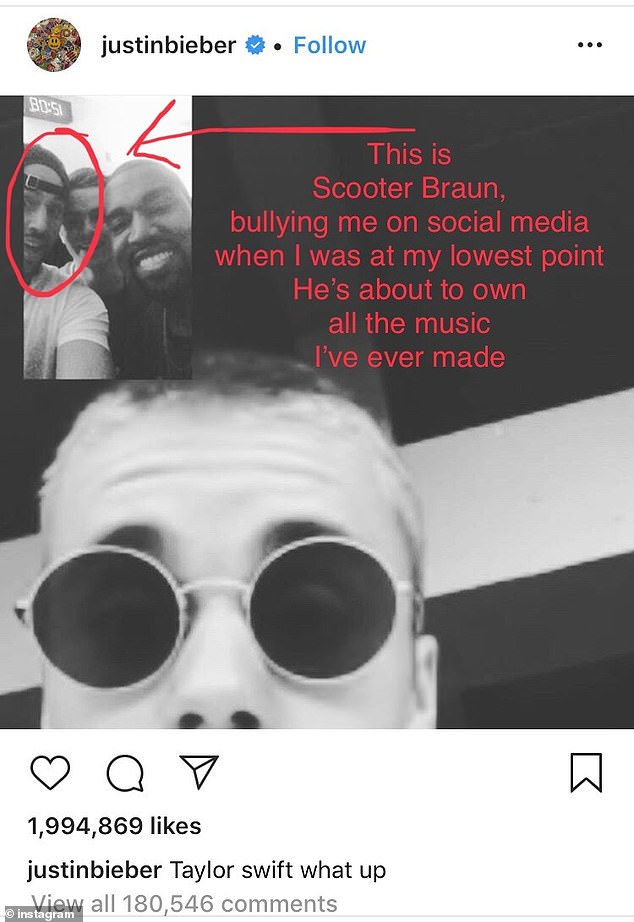 In a June blog post, she said for years she pleaded for a chance to own her work. Pictured she accuses Bieber’s manager Braun of bullying her

She then dropped the bombshell that she may not perform at the November 24 awards show at all and the documentary about her may never stream.

‘Right now my performance at the AMA’s, the Netflix documentary and any other recorded events I am planning to play until November of 2020 are a question mark,’ she said.

But TMZ reports that Big Machine sources say Scott and Scooter have ‘extended an olive branch to Taylor, asking her to sit down with them and try to bury the hatchet’.

The source claimed ‘she flatly refused, threatening if they didn’t give her exactly what she wanted she’d go public and tell people to attack Big Machine as well as Scott and Scooter’.

The insider added that Swift ‘has admitted she owes the label more than $7million and hasn’t paid for more than a year’.

They also reportedly claimed she owes the label masters and video content.

DailyMail.com has reached out to reps for Braun and Borchetta but did not immediately get a response.