The “ME!” singer, 29, made the announcement in a new interview with CBS Sunday Morning, which will air on Sunday, August 29. In clips from the interview, host Tracy Smith asks Swift if she has plans to re-record her discography with Big Machine — to which the singer responds: “Absolutely.”

In June, Swift slammed Braun, 38, on Tumblr after news broke that he had purchased Big Machine in a deal worth more than $300 million, according to Billboard. Before she signed with Universal Music Group in 2018, Swift had worked with Big Machine since 2005. She recorded six albums with the company, which Braun now owns after his deal.

Taylor Swift and Scooter Braun. Michael Buckner/Variety/Shutterstock; John Salangsang/Invision/AP/Shutterstock
Taylor Swift’s 7th Album: Everything We Know About the Next Era of Music

In her Tumblr post, Swift said that she “pleaded” with Big Machine for a chance to own her work but was only offered a deal to sign a new contract where she would have to “earn” one old album back for every new one she turned in.

“I walked away because I knew once I signed that contract, [Big Machine CEO] Scott Borchetta would sell the label, thereby selling me and my future,” she wrote. “I had to make the excruciating choice to leave behind my past. Music I wrote on my bedroom floor and videos I dreamed up and paid for from the money I earned playing in bars, then clubs, then arenas, then stadiums.”

The “You Need to Calm Down” songstress also accused Braun, who manages artists including Ariana Grande, Demi Lovato and Kanye West, of “incessant manipulative bullying.” The 10-time Grammy winner also shared a 2016 Instagram post by Justin Bieber, which featured him, Braun and West on a FaceTime call. Bieber captioned the post, “Taylor swift what up.”

In text over Bieber’s photo, Swift wrote: “This is Scooter Braun, bullying me on social media when I was at my lowest point. He’s about to own all the music I’ve ever made.”

Swift claimed that Braun got his two clients to “bully me online” after Kim Kardashian “orchestrated an illegally recorded snippet of a phone call to be leaked.” The musician’s claim was in reference to Kardashian’s 2016 Snapchat video, which seemingly showed Swift approving some of the lyrics to West’s “Famous”, in which he raps: “I feel like me and Taylor still might have sex / Why? I made that bitch famous.” The video followed Swift accusing the song of having a “strong misogynistic message.”

“Now Scooter has stripped me of my life’s work,” she wrote. “Essentially, my musical legacy is about to lie in the hands of someone who tried to dismantle it.”

After Swift’s rant, Braun’s wife, Yael Cohen, slammed the artist on Instagram, claiming that she had “passed” on an opportunity to own her masters. 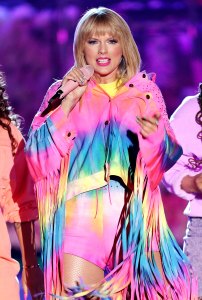 “I have never been one for a public airing of laundry, but when you attack my husband… here we go,” Cohen wrote. “Let’s start with @taylorswift, whoa. Then let’s get the facts straight. You were given the opportunity to own your masters, you passed. Interesting that the man you’re so ‘grossed out’ by believed in you more than you believe in yourself.”

She claimed that Swift’s father, Scott, who is a shareholder for Big Machine, was “notified” of the deal before it was announced. Cohen also alleged that Borchetta “personally” told Swift about the news before it was made public, which went against the singer’s claim that she found out about the deal at the same time as the rest of the world.

“And girl, who are you to talk about bullying?” Cohen continued. “The world has watched you collect and drop friends like wilted flowers. My husband is anything but a bully, he’s spent his life standing up for people and causes he believes in. Beyond that, it’s easy to see that the point of putting this out was to get people to bully him. You are supposed to be a role model, but continue to model bullying.”


Taylor Swift and Joe Alwyn: A Timeline of Their ‘Gorgeous’ Relationship

In a July interview with Billboard, Braun referenced the Swift drama by recalling that the singer had been “kind” to him when Bieber opened for the Nashville native on the U.K. leg of her Fearless Tour in 2010.

“Everyone at Big Machine — Taylor was kind, Scott was kind — everyone was kind to me and [Bieber] when we were doing that show, and you don’t forget those things,” he said. “I never forgot that.”