KARACHI: Bass guitarist and composer Sohaib Lari was comfortably seated on a sofa in his cool and cosy studio space in Karachi. He, along with Hamad Khan, formed the duo that founded Bigfoot Music – an upcoming studio and virtual space focusing exclusively on original content.

“Our industry lacks original music,” Lari told The Express Tribune as he sipped on his cup of tea. “We are not interested in covers; everyone is doing them. We are looking for artists who have found their own rhythm so that we can make others groove to it.”

In the meantime, Chand Tara Orchestra continued tracking their song inside the recording space visible through a small glass window. Lari had his ears on the recording as several buds filled the ashtray on the side table, tantamount to the number of people who occupied that cushy space. This was the small yet significant realm of Lari and Khan, where they collaborated with various artists in hopes to land a ‘big foot’ into Pakistan’s music scene.

“Bigfoot started in March,” recalled Lari. “We were looking to produce artists with original songs without charging them a penny. We found some and some found us, but we didn’t entertain half-baked ideas with no sense of originality.” 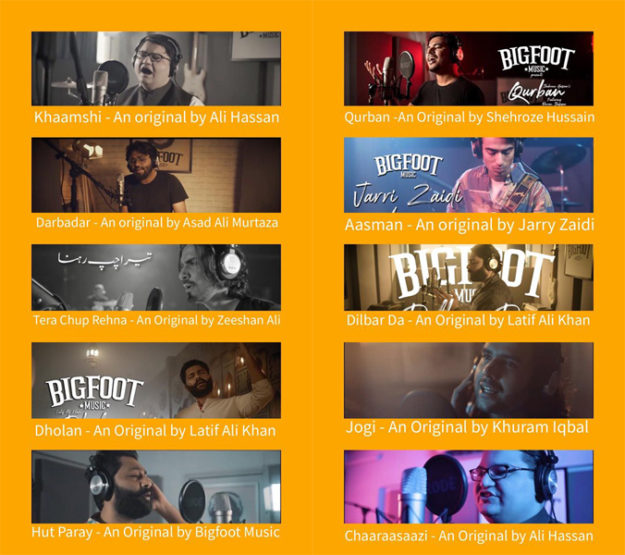 Staying true to their promise, Bigfoot managed to release 16 original songs along with their music videos since March. That makes two original songs each month.

Khan, however, claimed how there is a serious issue with the current generation of musicians and that is entirely the fault of those before them. “They only want to make covers with better sound because that’s all they’ve heard. Yes, original music is being produced, but much of the hidden talent lies where investments are limited and the playing requires polishing.”

Recently, they released Jogi with Khurram Iqbal, who is also the lead singer of Fuzon. It’s a funky track fused with eastern-classical music. “Not once did we resist before saying yes to that song. We even played the guitar, keys and bass on it,” the duo revealed.

While its portfolio is indeed original and a step in the right direction for the music scene at large, Bigfoot has been blamed for producing artists they have befriended. “Having a certain preference or taste in music does not mean there is nepotism involved,” they clarified.  Lari recalled how a friend once came to him with a rock track that echoed of the mid 2000s rock scene. “It was funky but it was not today’s music, so we didn’t produce it.”

Ik Wari’s vocalist Zeeshan Ali also joined in as he hesitantly sat down before steering into a series of compliments for the producers. The singer had landed his debut in Nescafe Basement with the song Tere Jeya Hor Disda. According to him, people only knew him for that cover song before he met Lari and Khan. “Now people know me for my own tracks and it feels good.”

Ali felt it’s really important for other production houses to stop exploiting artists for money or forcing them into creating something that is pre-packaged and sell-able. “I know at least 200 people in Lahore who make original music but have no means to produce it,” he added.

Khan explained how Bigfoot is in fact a product of their own struggles as underground musicians, which is why they don’t believe in treating musicians like clients. But if the vacuum created by cover songs is to be filled properly, there needs to be more of such ventures.

“One place cannot provide everything and it’s good to set some limits,” says Khan. “We produced a song called Seaside with Saifur Rehman, an amazing song-writer who randomly landed in our studio. It’s the only English track we’ve done so far and it’s very different from the rest.”

In contrast, Khan played a ghazal they produced with Ali, titled Tera Chup Rehna, which echoed in their little sanctum, appearing as the simplest but the most heart warming track they had produced so far. “What a makes sound mature is not the layers of technology applied to it, nor the kind of shredding, or the number of instruments. What makes a sound mature is the way it is composed. There could be three chords but if they sound encapsulating, that’s your eureka moment!” said Lari.

To further add on to the versatility experienced within the studio, Hamad played yet another track filling the studio with groove and rap music, which the two had produced with Latif Ali Khan and Ali Gul Pir, namely Hut Paray.

The duo promised to carry on the experiments and keep their doors open for more original content. There are, however, a few no-go areas for them. “We are open to ideas, but see…we won’t call ourselves electronic music producers. We are organic music producers; we record instruments live,” shared Lari.

Khan added, “I have another perspective on this. If Nusrat Fateh Ali Khan made a song, can you make it better than him? If you can, then do it. Otherwise, don’t over-complicate and ruin it. We had a rock band ourselves, but if a particular genre of music is not heard, then it is not understood. It will be unjustified for the musician.”