California Center for the Arts, Escondido

You haven’t lived until you’ve seen Mary Chapin Carpenter and Shawn Colvin sing – and maybe add a subtle dance move or two to – “I Want It That Way.”

“It’s pure pop perfection,” said Colvin. “No guilt. You should never feel any guilt about the songs you love.”

The packed audience at the beautiful California Center for the Arts, Escondido last Thursday night certainly didn’t feel any guilt about their feelings for the two singer/songwriters, erupting into applause and laughter, shouting out questions and leaving the duo with a couple of standing ovations.

Carpenter and Colvin have been friends for more than three decades, and this tour gives them a chance to share the stage, along with personal stories, hard-earned wisdom and an obvious appreciation for each other’s work.

It also gives fans a rare opportunity to hear the award-winning BFFs harmonize on some of their biggest hits.

In fact, according to Carpenter, that was the impetus for the tour for her. “I’m a harmony wench, a harmony slut,” she laughed. “There’s no one I’d rather harmonize with than Shawn.”

Although the setlist included Colvin’s “Shotgun Down the Avalanche,” “Sunny Came Home” and “Polaroids,” and Carpenter’s “This Shirt” and “Come On, Come On,” the two also performed Paul Simon’s “The Only Living Boy in New York,” Donovan’s “Catch the Wind” and Emmylou Harris’ “Raise the Dead.” 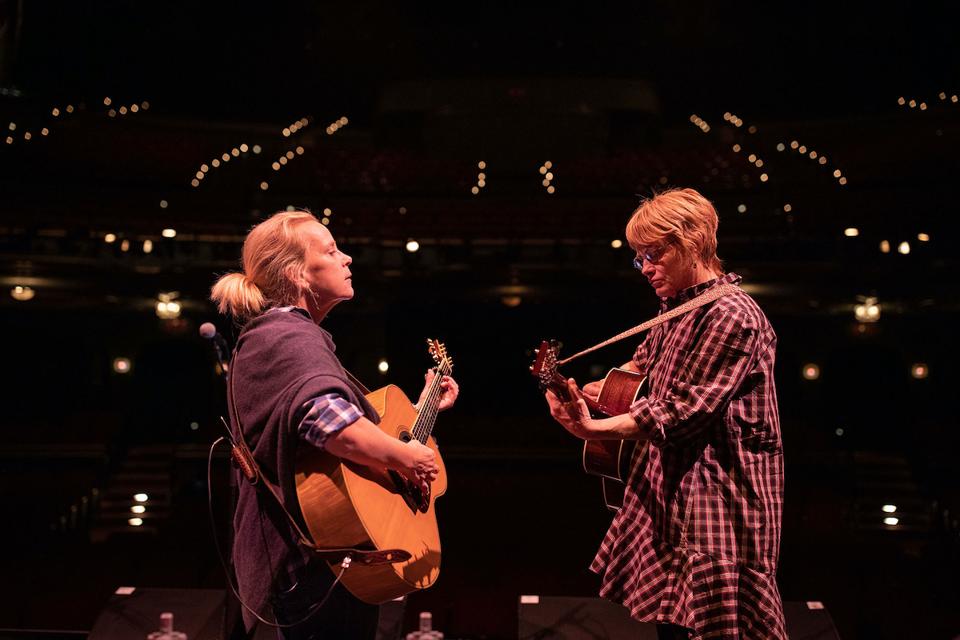 The concert opened with an unexpected yet gorgeous version of Don Henley and Bruce Hornsby’s “End of the Innocence.” Nobody does covers like Shawn Colvin, and this one was haunting, with beautiful harmonies by Carpenter, whose interpretation of lyrics, “O’ beautiful, for spacious skies/But now those skies are threatening/They’re beating plowshares into swords/For this tired old man that we elected king,” was pointed and powerful.

Carpenter also introduced her new song, “Our Man, Walter Cronkite,” which, in many ways, sets the tone for this tour.

Now in their sixties, Colvin and Carpenter have a lot to say about a lot of things, and they’re enjoying their newfound freedom to say it.

“We can’t hear, we can’t see, we can’t remember anything,” they told the mostly baby boomer audience, who laughed and nodded in agreement. “And … we don’t care!”

Colvin described her experiences at her local coffee shop, where she flirts with the young baristas and despairs over their lack of musical knowledge.

“I go in there every morning with my hair like this,” she explained, making her hair stick out in all directions, looking like postpartum Jocelyn on “Schitt’s Creek.” When it remained that way and the audience couldn’t stop laughing, she asked Carpenter to fix it, endearing herself even more to her fans. (Okay, maybe she does care just a little.)

“We’re like the Smothers Brothers,” she sighed, “and I’m Tommy.”

“No,” said Carpenter. “I think we’re more like the Tina Fey and Amy Poehler of folk music.” 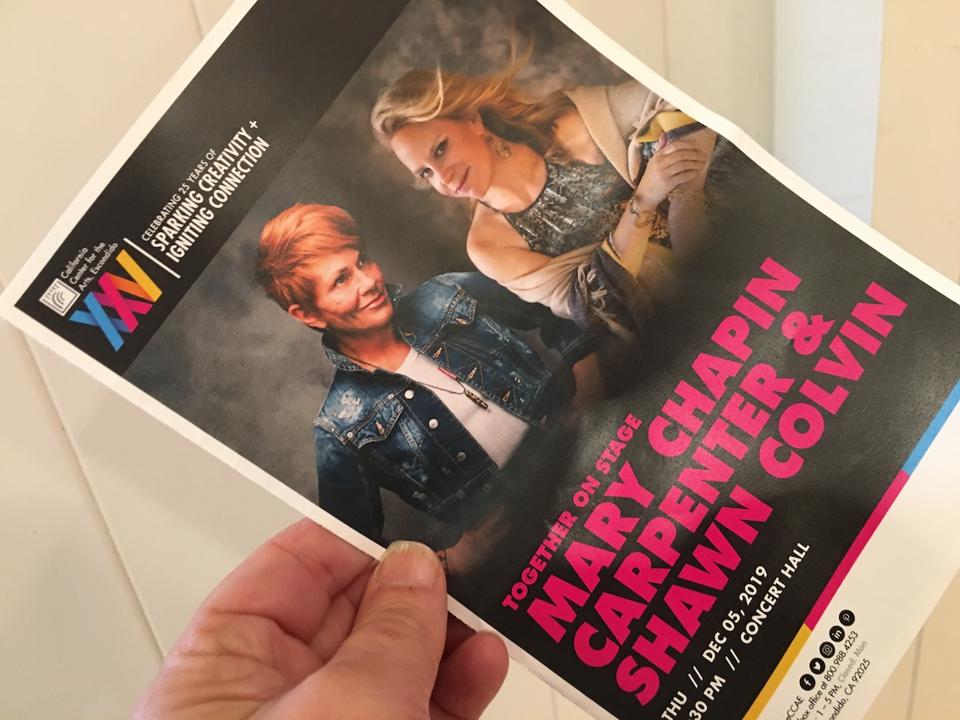 Program from Mary Chapin Carpenter and Shawn Colvin in concert at the California Center for the … [+] Arts, Escondido.

The pair reminisced about being 16, about watching the first space landing and about Tiger Beat magazine. They even sang bits of “Daydream Believer,” “Mandy” and “Stayin’ Alive.”

“We are so lucky to have grown up with the music we did,” said Colvin, to the audience’s applause.

In many ways, this was a night of nostalgia, celebrating decades of friendship and music. It felt appropriate that they ended their set with Carpenter’s “The Hard Way,” singing and nodding to the lyrics, “Everything we got, we got the hard way.”

But it was a celebration of the future, as well, with Carpenter’s new single just released yesterday and the 30th anniversary acoustic edition of Colvin’s classic album, “Steady On,” coming out soon.

Although the times and musical trends may have changed since Carpenter and Colvin started their musical journeys, nevertheless — and thankfully — they persist.

Check out the duo’s tour dates on Carpenter’s website or Colvin’s website, and see who else is coming to San Diego on the California Center for the Arts, Escondido website.