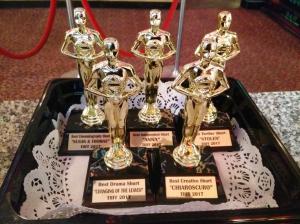 The Toronto International Independent Film Festival is an eagerly anticipated annual event which takes place in December at the Kingsway Theatre.

The festival is planing to host visiting artists to present an average of more than 50 non-fiction films, and offers a variety of exciting events throughout the town.”

TORONTO, ONTARIO, CANADA, December 22, 2017 — The Theatre is located at 3030 Bloor Street West, Toronto ON M8X 2Y8. Although it only began in 2016, the Festival is already considered to be one of Canada’s foremost cinema celebrations, specializing in non-fiction films and documentaries. Unlike other festivals, entry to view the productions on offer at the Kingsway Theatre is free.

This year’s event was held on December 17th, and as last year, it was a resounding success. Awards and prizes were held in a variety of categories including best film, best director, best screenplay and best music video.

The mission of the festival is to showcase some of the most accomplished new works and to celebrate the contributions to cinematography from emerging and more experienced film makers. As in 2016, this year’s Festival offered opportunities for members of the film industry to get together to establish and re-establish relationships with their fellows. It gave them a forum for mutual support and the discussion of common problems associated with the filmmaking process.

More than 50 productions from Canada and overseas were shown at the main venue of the Toronto International Independent Film Festival.

These included workshops, master classes and panels. Specific dedicated sectors were well attended at the Festival, with the common aim of giving sound advice about the making of films, their distribution and promotion. The intention of the professionals associated with the Festival is to find ways to ensure that the creativity of talented cinematographers should not go to waste.

The ‘Investor’s Sector’ of the Festival aims to create opportunities where people come together to help finance quality screenplays and emerging projects to come to fruition on the big screen.

The ‘Marketing Sector’ gives advice about ways that filmmakers can promote their works and generate publicity for the smaller projects where budgets are tight. This sector highlights ways to maximize quality advertising and promotion.

The ‘Film Distribution Sector’ helps the participants in the Toronto International Independent Film Festival to sign contracts with distribution companies who are familiar with the necessary processes that ensure high quality films are shown in a wide variety of locations, not only in Canada but also in the USA, Europe and Asia.

Together these sectors strive to ensure that films are shown to the widest possible audience and that funding opportunities are fully exploited.

As it proved to be at its inauguration last year, the Toronto International Independent Film Festival 2017 was an emphatic triumph, and the event is sure to go from strength to strength in the future.

For more details, including the competition winners, visit the official website
https://torontointernationalindependentfilmfestival.com or https://www.facebook.com/TorontoInternationalIndependentFilmFestival/

The main goal of Toronto International Independent Film Festival is to present the most exciting and inspiring new works on film being made today.