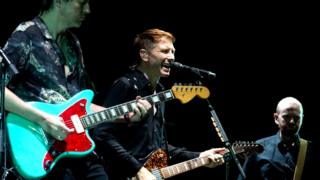 If you’re a young music-maker hoping to take the pop world by storm, this is the best of times and the worst of times to make your bid for glory.

The music industry has undergone a convulsion in recent times as CD sales have slumped and streaming services have risen in popularity.

That has created new challenges, but also new opportunities.

First, the bad news: a lot of other people have the same ambition.

“There are 20,000 tracks being uploaded to Spotify every day,” says Amelie Bonvalot, head of digital at Domino Recording Company. “You compete with that amount of music, so it’s more difficult to stand out.”

Not only that, but there’s less room at the top than there used to be.

Last month, on 7 June, the UK singles chart notched up a dubious historical achievement. For the first time in history, the entire top 10 was unchanged from the previous week.

Thanks to music streaming, once the great British public have latched on to a hit tune, they’re reluctant to let it go. That means they keep listening to the same music, leaving less space for new songs.

“The dynamic has changed. It’s harder to break into the very top of the market than it used to be,” says Peter Quicke, managing director of the Ninja Tune label.

So how do you deal with that? Well, Ninja Tune and Domino are both living proof that the music business continues to be a diverse place.

While three big conglomerates – Universal, Sony and Warner – continue to dominate the industry, there are plenty of more agile players who offer a different perspective.

And for those independent labels, getting into the top 10 is less important than building and developing a new act.

“We don’t look to one track to break an artist any more. The development pathway takes a bit longer and needs more patience,” says Domino’s Ms Bonvalot.

“It’s very different to a track going on the radio and things blowing up overnight.”

OK, so if you’re a new artist, you may have to be prepared to play a long game. But what does that game look like now?

“Reaching people with music used to be about getting a lot of copies into the shops,” says Ninja Tune’s Mr Quicke.

“Hopefully lots of people would go and buy them and the availability in shops would reduce. But now, of course, everything is available all the time on streaming.”

Getting streaming right is crucial. But that doesn’t just mean notching up huge numbers of streams, say the music industry professionals.

“I see tracks that get a lot of streams, but that doesn’t mean that they’ve got a fan base,” says Domino’s Ms Bonvalot.

“That doesn’t mean that they will be fans of the artist or listen to other work, listen to an album or come to the shows.”

Other streaming services are available, but Spotify obsesses the industry

So the important thing is to translate “that discovery moment” – the moment when someone hears a new artist for the first time – into a lasting relationship with the music.

Musicians, their managers and their labels actually have a lot of tools that allow them to do just that. Spotify, for instance, has a service called Spotify for Artists that allows the creators of the music to see who is listening to them.

“We actually see quite a lot of data, ” says Ms Bonvalot. “You can see exactly how many times your track has been listened to.”

Once labels have that data, they can use it to contact listeners and build on that initial interest.

As Domino’s head of marketing, Brooke Salisbury, says: “A streaming platform is a place for discovery. We make sure that after they’ve had that discovery on-platform, we find that person off-platform.”

One important way of getting heard is to get your music on to the playlists produced by Spotify and other streaming services.

As Ninja Tune’s Mr Quicke says: “Those playlists are really important. But you don’t have to be in the charts to rack up loads of streams.”

Maribou State are one of Ninja Tune’s rising acts

He points to the success of Maribou State, an electronic music duo who signed to Ninja Tune in 2015 and have since made two albums.

“They have never been in the charts, but they’ve got a million and a half monthly listeners on Spotify, they headline festivals and have decent slots at Glastonbury,” he says.

“They’re not at the top end of the industry, but they’re doing well.”

It says 54% of its member labels and distributors now make more than three-quarters of their revenues from digital income, as opposed to physical sales of vinyl and CDs.

And if you do manage to make it big, the global nature of streaming means it’s now easier to conquer new territories than it was in the pre-digital age.

Your music also has the power to go on reaching new audiences years later.

“Back catalogue tracks are some of the most listened to on streaming platforms,” says Domino’s Ms Salisbury.

“Take Me Out by Franz Ferdinand has had a complete second life, taking off in various markets – the UK, US and Latin America. It has had 300 million streams just on Spotify.

“Even people who went to the shop and bought the CD are going to stream and stream again. When we have a new release, it’s 100% sure that you’re going to see uplift in back catalogue as well.”