Often outlandish just for the hell of it, “Transparent” was better-suited for a quieter, honest ending over this didactic tumult.

Right off the bat, it’s jarring to see “Transparent” go the “La La Land” route — opening not only with a big musical number, but with a bad song about L.A. traffic. As Sarah Pfefferman (Amy Landecker) belts out a tune about the endless yet inaccessible opportunities along Sepulveda Blvd. (which Los Angelenos will feel in their bones), it’s clear this “Musicale Finale” is gonna go out with a bang, no matter what.

“Leaving an impression” is kind of the point with Jill Soloway, whose Amazon original series has always tried to push the culture forward, so long as it was on their terms. First, the series’ groundbreaking depiction of people who are transgender broke important barriers and started critical discussions, but later “Transparent” felt like it was pushing back — specifically, against the learned wisdom that parts for transgender characters should be played by actors who are transgender. By the time its Emmy-winning star Jeffrey Tambor was forced out (for alleged sexual misconduct, not because he’s cisgendered), it felt like the culture had grown past the series, and, fittingly enough, the finale follows a similar pattern.

Maybe you’re on board at the beginning, going along with the Pfeffermans’ sudden preference to say everything in song, but unlike Damien Chazelle’s excellent musical, “Transparent” is actively hindered by its crooning bravado — and its goodbye doesn’t greatly improve after one bad song.

Written by Faith and Jill Soloway (with Faith handling the songs), the final episode (formally titled Season 5, Episode 1, “Musicale Finale”) starts with Maura’s death. As has been widely reported, Soloway chose to kill off her trans parent instead of recasting Tambor or finding a way to work around his character. The children hear the news from Maura’s roommate, Davina (Alexandra Billings), and come rushing home to mourn and remember their Moppa. This leads to a lot of messy feelings tossed around quickly, and just as quickly forgotten.

Despite clocking in at 102 minutes, the feature-length finale still tugs on a lot of threads it can’t finish: Why does Maura leave Davina her house, and her kids nothing? Don’t worry about it. Why is Davina upset about inheriting a “goddamn stinkin’, drafty, might-as-well-be-haunted” palatial, extremely valuable, two-floor Hollywood estate? Who cares? Why would Rabbi Raquel (Kathryn Hahn) forgive Josh (Jay Duplass) and maybe marry him in front of her campers? Because it’s a series finale and someone has to walk into the sunset holding hands, gosh darn it!

Going along with that last example, the given answers aren’t satisfying either. So much of what made “Transparent” great over its first few seasons came in its non-binary way of thinking. Viewers were invited to open their minds and embrace various out-of-the-ordinary lifestyles, whether it was a happy, sexually charged throuple, or wrestling with family lineage through mental time travel. Similarly, the characters’ emotional arcs were important, but they didn’t have to abide by what was expected of them. Maura and the kids didn’t have to be happy all the time, even when it felt like they should be happy; they just had to honestly react to the multitude of complex emotions swirling around inside them, between them, and out in the world at large.

But the musical aspects of the finale demarcate those shades of gray. When Raquel busts into a sultry burlesque routine to educate the wayward Pfefferman children, she keeps repeating the phrase, “You can’t run away from your grief.” She sings, taps, and dances her way around the room, but the message remains the same: deal with your pain. At one point, she sits on tops of Josh and pushes her cane into his back, singing, “You can’t run away from your feelings.” OK, OK — they get it! We get it! But why are you being so bossy?

When the time comes for them to grieve together, it happens without a song. Shelly (Judith Light) comes to her kids and holds them, accepting them for who they are, and not trying to push them into being whoever she expects them to be. There’s no big showstopper, and it’s the closest the finale comes to genuine heart. 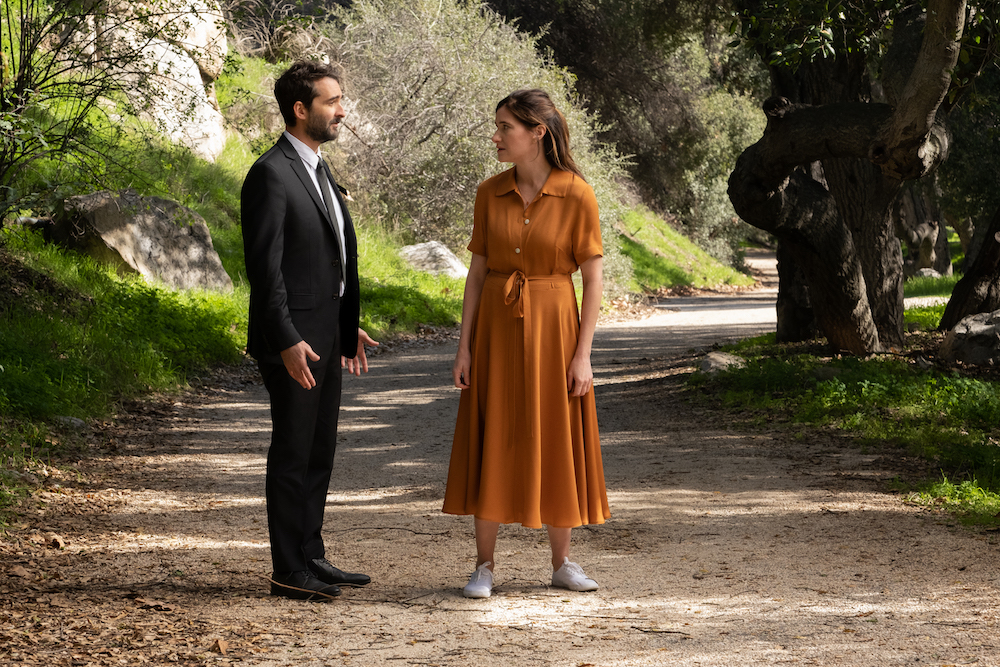 But bursting into song at an emotional peak is the bedrock of musicals; the songs move the story forward, like when Christian and Satine fall in love during the “Elephant Love Medley” in “Moulin Rouge!” or Mia knocks her audition out of the park in “The Fools Who Dream” in “La La Land.” In this way, “Transparent” isn’t really a musical. All the songs are didactic and direct, replacing scenes that, in the past, covered a wider sentimental spectrum. Then the critical moment that should be set to music isn’t, as “Transparent” twists itself into something worse than it was before, ignoring the often inexplicable, difficult-to-rationalize emotions of adulthood.

One could argue that applying the conventions of a musical to a show that wants to break conventions is misguided, but even if that’s the point, this story doesn’t work on its own terms. In the closing number bound to raise eyebrows, Shelly leads a celebratory song during the first day of Maura’s shiva. Titled “Joyocaust,” the jist is that Jews need to spend as much time bringing joy to one another as they do remembering the pain they’ve suffered. But as former guest stars like Bradley Whitford and Cherry Jones pop up in bright-colored suits to dance the day away, all you can think about is: How did we end up here? What is the lasting lesson of four-plus seasons? Don’t be a mope?

It just doesn’t add up, whether you look at it from a practical standpoint or a broader figurative assessment. The “Transparent” finale feels like a desperate flailing for attention that betrays what the show did best and, worse still, such contradictory pomp comes from a series that knows it should’ve gone quietly into the night, rather than clawing tooth and nail for another day of sun.

“Transparent: The Musicale Finale” is streaming now on Amazon Prime.