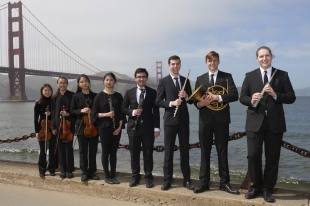 Music director Christian Reif with the San Francisco Symphony Youth Orchestra, including (third from right) David Davisson, recipient of a scholarship from the Pedrozzi Foundation. (Photo by Stefan Cohen/SFSYO)

They performed at six venues in four countries, and a critic from Berlin’s Tagesspiegel called their performance “brilliant and absolutely electrifying.”

Davisson, a flutist, was a principal member of the Livermore High School Symphonic Band and performed with several local orchestras prior to joining the Youth Orchestra in 2017.

He attributes his “grit,” more than his talent, for his success as a musician, saying it is grit — defined as perseverance and passion for long-term goals — that drives him to practice three to four hours a day.

Davisson said while performing for the first time at Davies Symphony Hall in San Francisco he had a moment of clarity that led to his decision to pursue music as a career rather than a hobby. He is planning to attend Rice University’s Shepherd School of Music for a degree in flute performance, helped by the Pedrozzi Foundation scholarship.

He is one of 115 students who received scholarships given to Livermore students by the foundation, a total of $443,500 this year.

A philanthropic Livermore couple endowed the Charles Amirkhanian Music Scholarship with a $100,000 donation in 2016, named in honor of the native Californian who was a composer, percussionist, sound poet and radio producer, and who co-founded the “Other Minds Music Festival” in 1992.