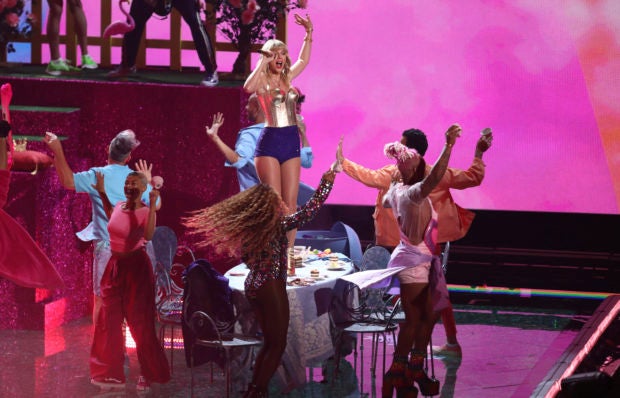 NEW YORK – If Taylor Swift, Missy Elliot and a 1990s rap reunion couldn’t halt the shrinkage of MTV’s television audience for its Video Music Awards, perhaps nothing can.

Taylor Swift performs a medley at the MTV Video Music Awards at the Prudential Center on Monday, Aug. 26, 2019, in Newark, N.J. (Photo by Matt Sayles/Invision/AP)

The show was seen by 4.9 million viewers live on Monday across 12 different Viacom-owned networks, the Nielsen company said.

That’s down from last year’s audience of 5.2 million, as the annual event has slid in television viewers each year since reaching 10.3 million in 2014.

MTV considers that more a reflection of changing media habits among young people than declining interest in its marquee show.

The amount of young people watching cable television in general is rapidly shrinking, and social media measurements for the show are up, reflecting the different ways MTV’s audience consumes the programming.

For example, MTV aggressively pushes out clips of the show on social media platforms, and said those views were up 85 percent over last year and were the highest of any VMAs. In the weeks leading up the show, social media engagements — liking, sharing or commenting upon announcements about the event — more than doubled over last year.

Swift, music’s biggest star, opened the VMA’s with two songs off her just-released album, and the versatile Elliott collected the Video Vanguard Award for her innovative videos. The show, which aired from Newark, N.J., closed with an all-star performance of artists with New Jersey roots, including Queen Latifah, Redman, Wyclef Jean, Naughty by Nature and Fetty Wap.

Fox News Channel was the week’s most popular cable network, averaging 2.33 million viewers in prime time. ESPN had 2.14 million, MSNBC had 1.48 million, HGTV had 1.26 million and TLC and USA tied with 1.09 million.

ABC’s “World News Tonight” topped the evening newscasts with an average of 7.9 million viewers. NBC’s “Nightly News” was second at 7.3 million and the “CBS Evening News” had 4.9 million.