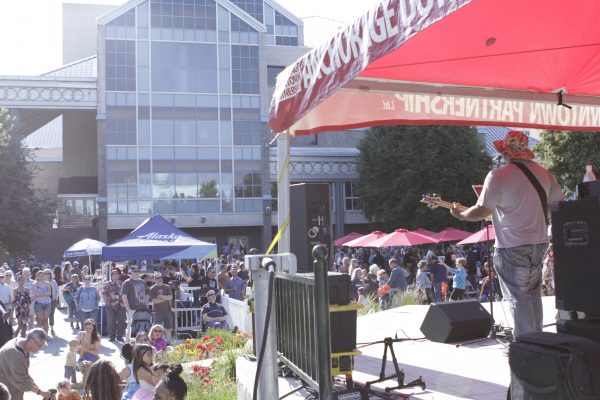 Anchorage-based H3 has been playing in Southcentral Alaska for nearly two decades.

The Hawaiian reggae band is named after a highway in Hawai’i and the three-part harmonies sung by the band’s original members.

Today, four members keep a busy schedule: working day jobs, keeping up with family and still playing up to three gigs every weekend over the summer.

One sunny weekday afternoon this June, the band played at Anchorage’s Town Square Park. The show was part of the city’s Live After Five concert series. And some attending said it was the biggest crowd they’d seen since the series started.

A machine pumped bubbles high into the air. A vendor sold drinks in a fenced off area near the stage. And people sitting along the grass nodded and sang along or danced with dogs and little ones.

One concertgoer named Barbara said she’s been a fan since she saw the band play in Girdwood in the early 2000s. She says she likes how they bring people together.

Lead vocalist and guitarist Shaun Pacarro says one reason for that might be the kind of music the band covers. 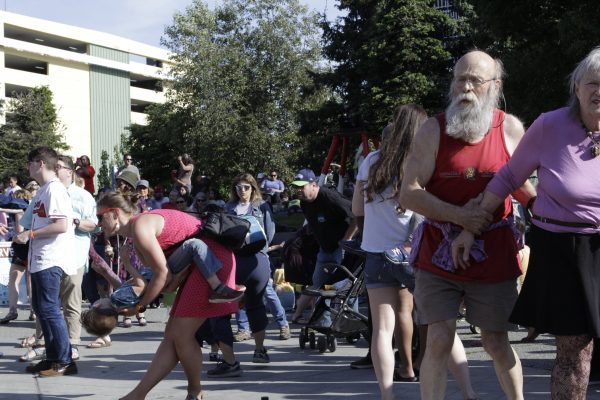 Although their island reggae interpretations have pulled from tunes ranging from pop and rock to country and reggae, Pacarro says one thing’s been consistent in how people have described their sound over the years.

Pacarro and George Noga — who does vocals and bass for the band — were among its three original members along with Tau Vaaia Fakaoti.

They’re both from Hawai’i, but met and started playing with Fakaoti in Anchorage in 2001.

Drummer Lee Thompson joined in 2006 after moving from Texas and being asked to audition for the band. Keyboardist Alex Cruver, who grew up in Eagle River, joined later.

All four have been playing together now for about 6 years.

But Pacarro and Noga still remember one of their first times playing in public. It was at Humpy’s Great Alaskan Alehouse. 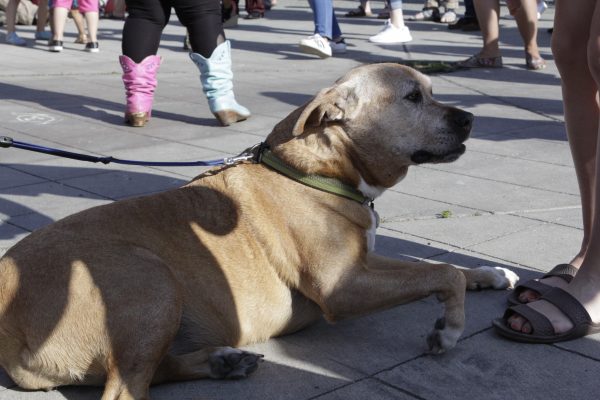 A dog named Maya sits with her human near the stage at Town Square Park for some H3 tunes. (Photo by Amy Mostafa, Alaska Public Media – Anchorage)

“They didn’t want to let us in because there was already a band playing,” Pacarro said. “We walk in there with our instruments and they’re like, ‘Who are those guys?’”

Noga says now more people know them and they play all over Southcentral.

This summer they’ve played for crowds in Anchorage and Palmer, and at Eagle River’s Bear Paw Festival for the first time.

“We don’t realize how many lives we’ve touched because we play so many functions, so many weddings, so many birthdays,” Noga said. “It’s not that we take it for granted. But because we’re so busy and our other lives are being, you know… day jobs and fathers, we don’t really get to sit down and enjoy the moment of how important it is to other people.”

Pacarro and Noga say it’s not easy keeping up with everything. But with supportive spouses, a lot of communication and good chemistry between the band members, it’s doable.

Afterall, music helps them manage everything else.

Noga calls it a sanctuary. And Thompson echoes that.

“Everything else goes away when you play,” Thompson said. “It’s a meditation. It’s awesome, you know? Without it, I can handle it for a little while. But after about a week or two, I’m ready to play again.”

That might explain why each of the musicians has been playing for so long.

Pacarro first picked up the ukulele in Hawai’i in the 10th grade when he was sent there to finish his schooling after getting into trouble. Noga started singing at church. Cruver started with the keyboard at 19. And Thompson with a toy drum set at 10.

Today, Noga says he’s happy the band gets to serve as Alaska’s reggae connection. And as far as what’s next?

Paccaro says they want to make time to record some of their original songs. And Thompson says he just wants to keep playing music.

H3 is set to play at the Williwaw Social later this month.