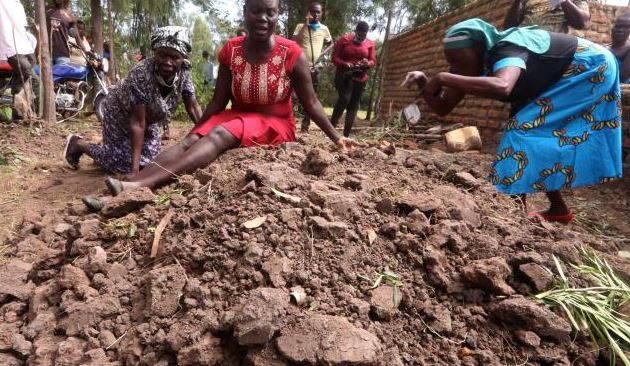 Nyanza
While ohangla musician Abenny Jachiga was buried by “strangers” in the dead of the night, popular “twist” musician John Nzenze was accorded a decent s

In Kisumu County, the family of ohangla musician Abenny Jachiga were still reeling in shock after people not known to them but believed to be police officers buried his body at dawn.
Sources told Sunday Standard yesterday that a group of people, some armed with guns and accompanied by “bouncers”, stormed St Elizabeth Hospital mortuary in Kisumu and took away Jachiga’s body.
By 2.30am, as family members were asleep, they buried the body.

SEE ALSO: Police bury Abenny Jachiga at dawn with only brother as witness

Soon after the burial, some of Jachiga’s relatives, including his widow Belinda Aluoch, lay prostrate on the grave to stop angry youth from exhuming the body and returning it to the mortuary.
In Vihiga County, he of the popular “twist” genre of music John Nzenze was also accorded final rites, but devoid of the drama that accompanied Jachiga’s burial.
Nzenze died about two weeks ago at the Mukumu Mission Hospital where he had been hospitalised for a month, battling hypertension and stomach ulcers.
The 80-year-old was best known for his Angelike Twist hit song released in the early 1960s.
Nzenze, who is among the last surviving group of pioneer artistes who popularised the Kenyan twist genre, was laid to rest in Kaptech village in Muhudu Ward of Hamisi sub-County.

The burial programme started at about 7am and he was buried two hours later.
Palpable shock
In Kisumu, Jachiga’s burial evoked memories of another night burial since measures on conducting burials came into force in the wake of Covid-19.
In early May, James Oyugi, a Kenya Ports Authority employee, was buried at midnight at his home in Siaya County, after health officials said he had died of Covid-19.
A case filed by his family demanding his exhumation is pending before a Siaya court.

In keeping with ban on public gatherings, not more than 15 people should attend a burial, a requirement that is barely being adhered to in other places.
On Friday, rowdy mourners had stopped Jachiga’s burial, overpowered police officers in riot gear and refilled the grave with boulders.
They were protesting the hurried manner in which the musician was being buried.
The mourners, who engaged the police in day-long running battles on Friday, damaged Jachiga’s coffin and stoned a pastor who had come with security officials to conduct the burial.
The musician died on Wednesday at St Jairus Hospital and his body was released on Friday for burial the same day as per the public health guidelines instituted to help combat the spread of Covid-19.

Although it has not been said if Jachiga was a victim of Covid-19, the police and public health officials insisted he had to be buried the same day.
On Friday evening, his fans who had thwarted his burial, returned to their homes, not  knowing that security personnel were lying in wait to bury him.
Working under the cover of darkness, they removed the body, took it home and buried it without any ceremony or ritual, including prayers.
Relatives and residents claimed the police were involved in the burial ceremony but senior police officers in the region denied the claims.
Police denial

Kisumu East OCPD Ezekiel Sing’oi denied claims his officers took part in the burial.
“I do not know the people who paraded as officers who went to collect the body from the morgue,” Mr Sing’oi said.
Jachiga’s younger brother, Austin Omondi said that as a family, they had to comply with government’s rules on burial ceremonies.
Omondi said he received a phone call from the area chief in the evening after mourners had carried his brother’s body back to St Elizabeth Hospital’s morgue.
He said the chief told him that the police would come and ensure that the burial was conducted within curfew hours.