Attorneys for victims of the deadliest mass shooting in modern U.S. history say they’ve reached a settlement to resolve lawsuits that’s expected to pay between $735 million and $800 million.

A statement Thursday from Las Vegas law firm Eglet Adams says the amount of the settlement with MGM Resorts International depends on the number of plaintiffs who choose to take part.

Hundreds of lawsuits have been filed against the owner of the resort where the gunman opened fire into an outdoor concert on Oct. 1, 2017. The company also owns the venue that hosted the Route 91 Harvest festival where 58 people died and hundreds were injured.

Eglet Adams represents nearly 2,500 victims and made the announcement just days after the second anniversary of the massacre. 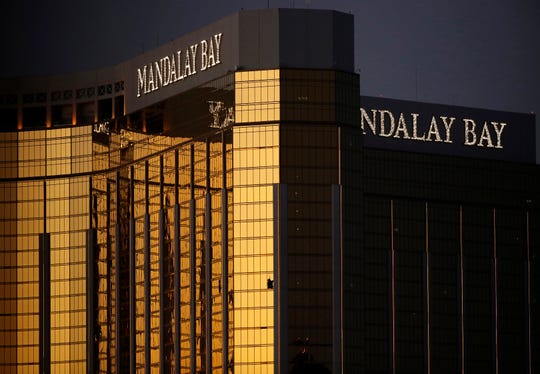 FILE – In this Oct. 3, 2017, file photo, windows are broken at the Mandalay Bay resort and casino in Las Vegas, the room from where Stephen Craig Paddock fired on a nearby music festival, killing 58 and injuring hundreds on Oct. 1. (AP Photo/John Locher, File) (Photo: John Locher, AP)

An independent administrator will be appointed by a court to dole out money from the settlement fund, attorneys and MGM said. They expect to wrap up the process by late next year.

“Our goal has always been to resolve these matters so our community and the victims and their families can move forward in the healing process,” said Jim Murren, chairman and CEO of MGM Resorts. “This agreement with the plaintiffs’ counsel is a major step, and one that we hoped for a long time would be possible.”

MGM’s insurers will fund a minimum of $735 million. Depending on the number of victims who participate, the company will contribute more, up to $800 million, according to the victims’ attorneys.

No one from Nashville was injured. A Tennessee resident, Sonny Melton, was killed shielding his wife, Heather Melton, from flying bullets.

In addition to Aldean, another Nashville label had two other artists, Walker McGuire and Adam Craig, perform at the festival.

“The last possible thing I thought could be happening was somebody shooting a gun at us,” Aldean told The Tennessean months later. “Once you figure out what’s going on … what people don’t realize is that we didn’t know where it was coming from. For all we knew he was on the ground backstage walking around mowing people down. It’s the worst thing I’ve ever experienced, hands down.”

The gunman, identified as Stephen Craig Paddock, was stationed 32 floors above the show in Mandalay Bay Resort and Casino.

According to a final three-page behavioral report released in January by the FBI, Paddock wanted mass destruction but wasn’t motivated by a grievance against anyone injured or killed in the attack.

“It wasn’t about MGM, Mandalay Bay or a specific casino or venue,” said Aaron Rouse, the special agent in charge of the FBI’s Las Vegas office. “It was all about doing the maximum amount of damage and him obtaining some form of infamy.”

This is a developing story, check back for updates.

The Associated Press contributed to this report.