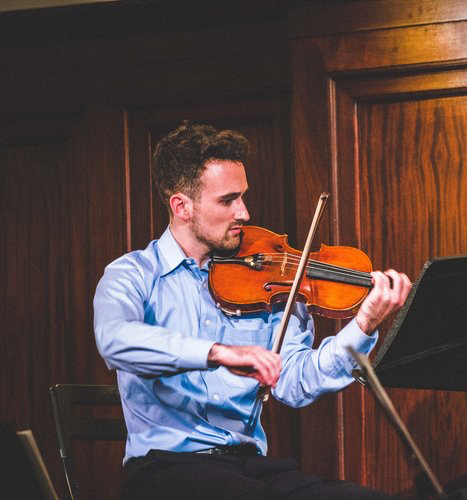 Michael Siess, who will perform in the Thornton Symphony Friday, hopes to boost enthusiasm for classical music (Photo from Mixtape Series)

While most kids grew up singing along to the catchy tunes of Sesame Street and Disney movie soundtracks, the Siess household was filled with the emotionally evocative sounds of Pyotr Tchaikovsky and classical violinists like Perlman.

“As a young kid … I thought Tchaikovsky’s 1812 Overture was awesome because when you’re a little kid [the sound of] cannons [is] super cool,” Siess said.

Since he was 4, Michael Siess has devoted his life to the violin — a haunting yet beautiful instrument, cradled by some of the most celebrated classical musicians of all time.

Siess attributes this loving obsession to his parents, who both have careers in music.

“Because they were both musicians, I was going to watch their concerts as well,” Siess said. “My mom as a violinist played in a lot of different orchestras around town, and my dad was a band director, so I [saw] what he was doing with his classes and conducting.”

While his childhood has played a large role in his musical life, Seiss’ crescendoing devotion to classical music stems from its unparalleled depth and complexity.

Siess is currently working on Debussy’s String Quartet, a challenging but richly layered composition. As musicians and scholars, Siess believes that it’s the group’s job to search for every color and extract every musical grain possible.

“It’s my favorite quartet of all time,” Siess said. “Every single movement offers so much versatility and it’s one of those pieces — once you hear it — you’ll instantly know why it’s special and why it’s unique.”

“No matter what kind of piece you’re playing, whether it’s the Shostakovich Symphony that we’ve been preparing or a solo movement of Bach, there’s always something to explore,” Siess said. “No matter where you are in your experience, you’re never done learning from it. Every single performance you have to find a different way to make it fresh, make it relevant and do something that you haven’t done before with it.”

Finding new meaning is especially crucial if classical music is meant to capture and maintain the attention of a 21st century audience.

“People are going to have to be a little more flexible and adaptable in terms of how they program and how they market themselves as artists going forward,” Siess said. “We need to find ways that we can give people a unique experience that’s actually worth coming out to.”

In response to the changing landscape of the music industry, Siess is collaborating with other musicians from USC and the Colburn School in downtown Los Angeles on an original concert series called “Mixtape Series.” According to its website, the small ensemble weaves together different selections of music based on similarities in harmony, mood and rhythm into a cohesive program.

“In this kind of format everybody gets a variety pack of repertoire in a way that makes sense for a modern audience,” Siess said. “Because each selection is no more than, say, four to six minutes, it’s easier to focus and you can find something a little more engaging as opposed to being hit on the head with 30 minutes of one thing.”

While Siess has a particular interest in chamber music because of its intimate nature, his time with the orchestra at USC has been a special experience. Early in his first year with the orchestra, Siess was selected to be one of the leaders of the group — where he served as the principal violinist several times.

“Starting out strong like that, I’ve been expected and I’ve always tried to carry myself as a leader within the orchestra,” he said.

For Siess, there’s no better feeling than performing with his friends and colleagues.

“It’s been such a fun program,” he said. “Our conductor Carl St. Clair really establishes a wonderful culture where everyone can get excited about the music and fully invest in what they’re doing.”

The Thornton Symphony will open the season with a performance of Shostakovich’s 10th Symphony this Friday at 7:30 p.m. in Bovard Auditorium.