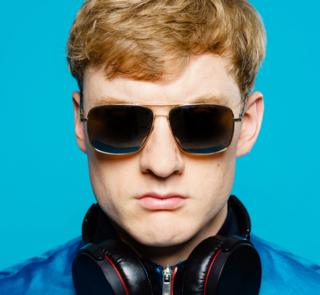 What was the greatest year for music of all time? Many of us, when asked, would probably choose an era from our own youth.

Certain songs or albums which remind you of school, your rebellious teenage years or college and university are the ones most people would choose to return to again and again.

But not James Acaster.

In his new book, Perfect Sound Whatever, the comedian argues 2016 was the greatest ever year for music. And, to be fair, he puts forward a compelling case.

Some of the albums he highlights were both groundbreaking and hugely successful. Beyonce’s Lemonade, for example, or Frank Ocean’s critically-acclaimed Blonde. Kanye West and Radiohead are also namechecked, as is David Bowie’s final studio album Blackstar, released days before his death.

And while some albums he writes about are much more obscure and unlikely to be remembered by anyone other than the most dedicated fans, Acaster says overall it was a significant year for evolution and innovation in music.

“We need to stop this writing off of modern day music, because the rules for what was the best year for music of all time keep getting made by old people,” he says. “I bought over 500 albums from 2016… and if I list my favourite albums now, most of them were released in 2016.

“So I’d be a liar if I said any other year was the best for music. I just think there are so many different types of music now, a level of diversity across all the genres. People go on about the 70s, and you’ve still got the same styles as there were in the 70s, but [there are] even more now. Music keeps progressing and keeps getting more exciting.”

Albums from Beyonce, the late David Bowie and Frank Ocean were among 2016’s highlights

Acaster delivers all this with a slight glint in his eye, clearly enjoying the debate his claims have sparked while he’s been promoting the book. And, he acknowledges, the topic is subjective and the book’s central argument is deliberately provocative.

Earlier this year, Greatest Hits Radio ran a survey in which 1984 was voted the public’s favourite year of music – highlighting Prince’s Purple Rain album as well as records by U2, Red Hot Chili Peppers, George Michael and Frankie Goes To Hollywood.

“The 80s was a time for classics,” said presenter Mark Goodier at the time. “Artists such as Queen, Wham! and Madonna were at their peak and, of course, the Band Aid release bought together some of the biggest acts.”

The Spectator, meanwhile, has previously nominated 1971 (with classic albums from Marvin Gaye, Joni Mitchell, David Bowie and Led Zeppelin), while The Guardian made a case for 1966 (The Beach Boys, Bob Dylan and The Beatles).

All perfectly acceptable – and predictable – suggestions of classic eras.

At 34 years old, it’s surprising that Acaster, who is well known for appearances on shows like 8 out of 10 Cats and Have I Got News For You as well as his own stand-up, has chosen to highlight and champion album releases from such a recent year.

But his journey of musical discovery is one that goes way beyond the records themselves.

In 2017, Acaster had a breakdown, prompted in part by the collapse of a long-term relationship. “It just became too much,” he explains. “Too much work, not enough time off. And then personal stuff happening to me on top of that meant that I couldn’t handle it anymore.

“I started going to therapy, and what I thought was going to happen was we were just going to talk about these recent things that happened and how they’ve impacted on me and I can’t handle them. And I was surprised that we were actually talking about my whole life. And looking back and going, ‘this has been coming for a long time’.

“And you just ignored all the signs because you thought, ‘I’m supposed to feel stressed every now and again’. And then you just let it all pile on. And you don’t acknowledge anything, and you don’t do anything healthy about it.”

Setting himself the task of buying music exclusively from 2016 – “the year before everything went wrong” as the book’s press release puts it – served as a welcome distraction.

Often, however, music can be a trigger for anyone who’s gone through something painful. You start to feel the lyrics, rather than just listen to them. But Acaster says discovering so much new music meant there weren’t any negative associations with his previous relationship.

Perfect Sound Whatever is named after a 2016 song by Jeff Rosenstock (left), while The Life of Pablo by Kanye West (right) was released in the same year

“Normally I find it hard to listen to certain songs, because they were one of our songs, which we listened to together. And so the good thing about doing this was that none of them were our songs because it was all this new music I’d listen to, so I could throw myself into this bunch of new stuff.”

The book is arguably one that wouldn’t have been written even just 10 years ago, when male mental health was a much more taboo subject. But Acaster welcomes the sea change in attitudes.

“Social media is bad in so many ways,” he says, “but it has started a bunch of conversations and normalised a lot of things that maybe would have taken a long time to get around to otherwise. And mental health is definitely one of them. You realise you’re not alone.”

Perfect Sound Whatever by James Acaster is out now.