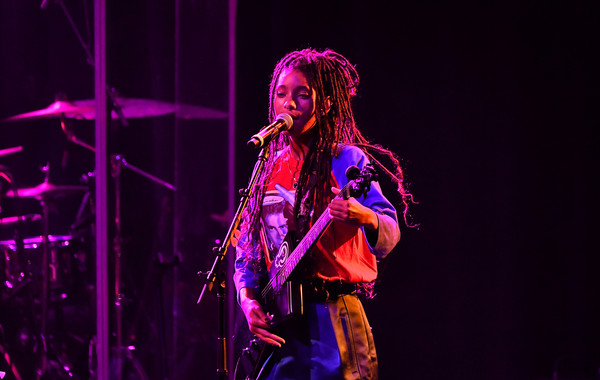 Willow has taken her music in a different direction since her first single “Whip My Hair.” Image courtesy of Getty Images.

I invite any skeptics of singer-songwriter Willow due to her connection to the dynastic Smith family to attend one of her concerts and experience her musical talents live. It is in a live show that the intricacies of her vocal range became truly apparent. Her voice is not a manufactured, artificial creation; rather, it is tangible and ever-present. Willow sings with the vigor and grace of someone far more experienced than she really is — one would never guess that she is only 18 years old.

Having a show at a theatre that’s not necessarily designed for concerts can be a tough task for performers to navigate through, but Willow and her opening act, Tyler Cole, did not let that get in their way. Their show was at the Rio Theatre, a multidisciplinary art house near the Commercial-Broadway Skytrain station in Vancouver, known for housing films, comedy acts, theatrical productions, and other performances. Despite the seated setup of the venue, which is mostly conducive to the film showings that the Rio is best known for, Tyler Cole started the night off right by trying to rouse the audience from their seats.

Cole battled against the unconventional setup of the Rio by performing through the entire theatre, walking through the aisles, to the front of the entrance, and, eventually, performing from the balcony itself. Even though half of the audience got up from their seats to be near the stage, there was still a lack of energy in the crowd due to the setup of the venue. Despite these challenges, Cole accomplished what he was there to do through performing songs such as “Sydney Poitier,” “Love at First Fight,” and a psychedelic surf rock version of “Bones.”

Willow’s arrival on stage caused everyone to rise up from their seats and to get as close to the stage as possible. For the layout of the venue, the level of energy in the theatre was exceptional. Most of the attendees seemed to be fans who have seen Willow grow through her music, and that feeling of devotion to her art was tangible. It was a symbiotic relationship where the audience fed off of her passion and vice versa.

Beginning with “Like a Bird,” the audience embraced the trance that the song placed them in. That feeling continued with songs such as “Female Energy, Part 2” and “Time Machine.” Her latest album showcases her growth as a musician with its sublime evocation, but its lyrics show that Willow is honing in on who she is as an artist. She has spoken about the troubling nature of her first foray into the music industry with the chart-topping single “Whip My Hair,” and the subsequent struggles of a young girl balancing a music career while retaining her childhood. Willow’s self-titled album, which was produced by Cole, is her transition into the next stage of her being. Much like in her own identity, the trance changed its form when she performed “Pretty Girlz” as, near the end of the song, it evolves into a fury of rolling synths, powerful drums, and incensing electric guitar. It is the fluid nature of her music that is so unique — energies that seem so different apart but, when put together, produce a transcending wave of emotions.

Willow played a few more songs from her discography and, although the concert was relatively short, she came back after a raucous call for an encore and performed “Wait a Minute!”, a song from her first album, Ardipithecus. The audience was left in a state of wonderment, not just from the energy of the song but from the concert as a whole. While Willow may never become a mainstream artist to the extent that she could have with her earlier music, her new music speaks to a generation searching for a voice to help guide them.