Seeing the potential of Filipinos in music, there was an opportunity to raise the level of awareness especially with the youth. Specifically, orchestral music has quite a low traction despite the numerous music groups that exist around the country.

“When we started Ang Misyon in 2012, it was with greater vision that social change would take place through the transformative power of orchestral music,” said Federico “Piki” Lopez, Ang Misyon Inc. president and cofounder.

The First Gen chair and CEO, who also has a personal affinity to classical music, together with Eugenio “Gabby” Lopez, known for his tenure in business at ABS-CBN, and renowned concert pianist Jovianney Cruz, founded Ang Misyon, a nonprofit organization institutionally supported by ABS-CBN, First Gen and First Philippine Holdings. It offers free professional music lessons, instrument support and values formation to the less privileged youth.

Seven years into changing the lives of the musically talented, Ang Misyon already counts 900 scholars. It nurtures the musical skills of children as young as six years old and from there, gradually honing them to be part of the Orchestra of the Filipino Youth (OFY).

Scholars go through a specific evaluation and learning process, working closely with mentors and a music director. They are not only taught methods in music but also values such as discipline, commitment, responsibility and community.

With the mission to make orchestral music accessible, Ang Misyon reaches out to local communities and children residing as far as Zambales, Bulacan, Batangas, Mindoro and Rizal. The young musicians make their way to weekly music lessons, sectional and orchestra rehearsals with a strong dedication. They are growing a sense of camaraderie and teamwork as a result of their shared passion for playing their instruments. The children are required to be in school, many of them with scholarships through music or band, academics or government grants.

A number of studies have shown a clear correlation when it comes to kids who play an instrument and getting good grades in school. These results connect the improved academic performance to the gained focus and discipline from playing a musical instrument. Incidentally, these scholarships require maintaining a highly satisfactory grade point average, which so far has served as another motivation for the kids to do well.

Pursuing the passion for music

As the scholars progress from Children’s Orchestra to the OFY, it is inherent that they are inspired to pursue a course and eventually a career in music. Part of the vision is to redevelop the local arts and culture scene while giving them alternative career paths. A number of mentors are products of the program and existing OFY members, giving them a source of livelihood as they work their way through school. 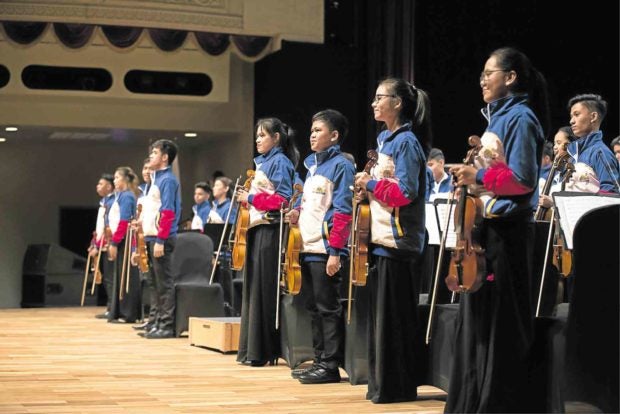 Some who are moving on to college level have shown their determination in studying in schools with a conservatory of music and taking on jobs that keep them close to their passion. With their experience in the OFY, they gain exposure in different venues and audiences both local and international. This helps prepare them for industry standards and work ethics, should they decide to become professional musicians.

Continuing the mission of creating social change through orchestral music, Ang Misyon is focused on working more closely with their existing scholars and potential partner communities. Since majority come from households with low income, access to lessons and opportunities to perform becomes a challenge. Ang Misyon Children’s Orchestra and OFY serve as platforms wherein the musical talent and skills of the less privileged youth are showcased.

“More than a cultural pursuit, Ang Misyon is a powerful social movement to bring about change in the Filipino youth,” Joshua Dos Santos, music director and conductor, said.

To celebrate Ang Misyon’s seventh year, the OFY will have an anniversary concert at Hyundai Hall, Areté, Ateneo de Manila University on Oct. 27 at 2:00 p.m. Admission is free, as a gesture of gratitude from Ang Misyon to its supporters through the years and to reach out to those who may not have easy access to orchestral performances. —CONTRIBUTED

Stay updated by following social media accounts @angmisyonph and @weareofy. For more information, you may contact the organization at [email protected]

Rivera is a communications officer of Ang Misyon.