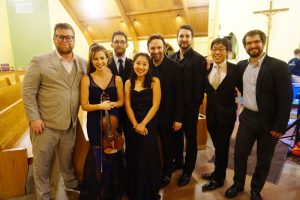 “The music we have programmed and the events are the most innovative yet,” says artistic director Barbora Kolarova.

Musical offerings this year range from the oldest known written music (a kind of Gregorian chant created before there was even such a thing as musical notation, Mr. Lombard said), to the most contemporary works created on the spot and premieres of newly commissioned works. It’s “The full range of available music,” Mr. Lombard said. “We really are beginning-to-end.”

The two Festival directors spoke with The Chronicle two weeks prior to the musicians’ arrivals. Colleague Roger Kalia, the festival’s music director and conductor, was not yet in town.

This year, the festival reduced the number of musicians to 42, from nearly 70 in the previous several seasons.

They implemented a different audition process, Mr. Lombard said, including taped performances and phone interviews to assure the artists share the festival’s mission — which is to seek artistic growth, build an adventurous program and keep classical music alive, the two said.

Having fewer musicians is also cost effective, Mr. Lombard said, allowing the festival to reserve some funds in anticipation of the 10th anniversary season next year.

Still, he asserts, audiences will see “no limits in the music we are having this year.”

Diversity is at the forefront, Mr. Lombard and Ms. Kolarova said.

Ms. Kolarova said she made it a priority to consider “everything in the world” in her programming.

Most pointedly, she said, “I made sure every concert includes at least one work by a female composer. We put in a lot of music that people have not heard before, or, works from a known composer but maybe the pieces are not as well known.”

Also, Ms. Kolarova points to the musicians themselves: “People who have their own ideas, individual players who want to share their musical ideas with each other.”

These include two artists who will improvise a 10-minute piece together, and those who mix electronic and live music. “Everyone brings something new and fresh to keep the music alive,” Ms. Kolarova said. “They want to make sure, like us, that classical music is still evolving.”

“That’s been in the DNA of the festival since Day One,” Mr. Lombard agrees. “We love that our audiences are with us, taking risks and appreciating that youthful energy.”

Ms. Kolarova points to one artist whose instrument is literally a computer. “Even for me that is something new I hadn’t thought about,” she marveled.

The series includes many non-traditional instruments, they said — “still while paying homage to the classics.”

It’s been a hallmark of Ms. Kolarova’s programming to mix traditional and non-traditional works on each program.

So, alongside the innovative music, there will also be Mozart, Schumann, and other familiar names, they said.

“We’ve seen that the audience really appreciates the new music,” Ms. Kolarova said. “They’ll say, ‘Oh, this is different,’ rather than just, ‘I don’t like this.’”

Tickets cost $15 for most programs, up from $10 last year. The cost for a full season pass remains $200 — including all events except for the Uncorked gala and concert. Details and advance tickets at LakeGeorgeMusicFestival.com.

• GF and LG: Five of this year’s chamber concerts will be performed in Glens Falls at the Park Theater this year — a venue they discovered last year when an outdoor concert at Wiawaka on Lake George had to be cancelled due to weather. This year, nine of the 10 chamber concerts will be concentrated at two venues — the Park Theater and Sacred Heart Catholic Church in Lake George — with the annual Piano Mania! concert returning to Tannery Pond Community Center in North Creek.

• 0-8: This year’s Piano Mania! concert on Sunday, Aug. 18, includes works ranging from zero to eight hands, each performed by one to four artists on one piano. Zero? Audiences will get to hear John Cage’s famed piece — 4’33’’. “Forget disonance, extended techniques or flowerpots,” Mr. Lombard says. “Maybe we don’t need notes at all.” Ms. Kolarova says, “It’s a super-famous piece we don’t get to hear performed many times, and not everyone even knows about it.”

• Barbora’s shoes — Last festival, Ms. Kolarova, a violinist, premieried a piece commissioned for her from composer Pascal LeBoeuf. Since then, she’s performed it several times, including in Glens Falls and Hudson Falls. Mr. LeBoeuf offered two stipulations: First, that it must always be performed on a program that includes at least one piece by a female composer. Second, Ms. Kolarova must wear a different pair of shoes for each performance. On that last note, in September, she will perform the piece again — during Milan Fashion Week in Italy, as a guest of Malaysian designer Alia Bastamam, who created many of Ms. Kolarova’s concert dresses.

• Premiere: Festival supporters Judy and Chuck Freyer have again commissioned a piece, this year from composer Sheridan Seyfreid — A Caprese for solo violin that Ms. Kolarova will premiere on Thursday, August 22.

• Niki Chooi, one of the pair of brother violinists who premiered Mr. Seyfried’s previous new commission for the Festival, returns this year as Festival concertmaster. He is now also the concertmaster of the Buffalo Philharmonic.

Mr. Kalia will also preside over a “Happy Hour” gathering at The Boardwalk in Lake George on Wednesday, Aug. 21.

• No kids’ show: This year, the festival does not include a children’s concert. They’re recommending the open rehearsals, especially for young children.

‘Behind the Scenes’ pre-concert talk with festival founders Alexander Lombard, Barbora Kolarova and Roger Kalia at 6 p.m. On the program: Concert Fantasia on Motives from Rigoletto by Luigi Bassi. All Are Welcome Here (2017) by David Smooke. Antiphon for the Creator by Hildegard von Bingen. Thalia Fields by Robert Deemer. Sonata No. 2 in F Major by Johannes Brahms. Suite (2019) by Finnur Karlsson. Poucha Dass for solo bass by Francois Rabbath. all that’s left is dirt and sky, by Chris Cresswell.

• Excursion! (à the Ausflug alrededor svxxta) 7 p.m. at the The Park Theater, 14 Park Street, downtown Glens Falls. Tix: $15. “Join our musicians as they travel around the globe and celebrate a variety of international composers.”

“Cocktail hour begins at 6 p.m.,” they note! Drinks available in the theater, and dinner, pre-show downstairs at Doc’s Restaurant. Program: Octet for Wind Instruments by Igor Stravinsky. Skin for Trumpet by Gemma Peacock. Joy of the Reunion for oboe, violin, viola and double bass by Chen Yi, String Quartet in B minor by Teresa Carreño. Flowerpot Music No.1, by Elliot Cole — played on flowerpots shared by patrons.

“Works that are rarely performed but beloved by those who know them,” they say. A reception will follow. On the program: String Quartet Op. 89, by Amy Beach. Quintet in F Minor by Ottorino Respighi. Concert [Concerto] in D major by Ernest Chausson.

• Wiawaka Holiday House, Monday, Aug. 12, 10 a.m. to noon. Percussionists perform Flowerpot Music No. 1 by Elliot Carter. Guests are invited to bring flower pots of any shape or size for the percussionists to try out. Some will make it into the Aug. 13 concert.