What began as a Nova Scotia teenager’s modest library of 20 or so country music records grew over the next six decades to roughly 8,000.

The family of the late Murray Deal was left with one question: what to do with their dad’s impressive collection?

“It was his life. It was his passion,” Jackson told CBC’s Mainstreet. “What our goal is, is just to find somebody that maybe doesn’t have an equal passion for it like he did, but would certainly appreciate the collection and use it and listen to it.”

It wasn’t easy to decide to sell the eclectic collection, which contains music from as early as the ’40s right up to the 2000s, Jackson said, noting her dad’s favourite artist was Hank Williams. The collection also includes artists such as Merle Haggard, Dolly Parton and Johnny Cash.

Jackson is asking for $5,000 for the entire collection and isn’t willing to see it torn apart.

Deal, who grew up in Fairview, N.S., started playing music when he was a kid. By the time Jackson was born, her dad could most often be found in his music room, where he jammed with friends or recorded songs and interviews on cassette.

He hardly ever missed a chance to sing folk and gospel songs at church on Sunday.

“He taught himself how to play the guitar at a young age, and his love for the music carried right through his entire life, and basically every facet of what he did his entire life,” Jackson said.

Jackson, who used to sing in one of her dad’s bands, wouldn’t call herself a musician — or even a country music fan, for that matter. 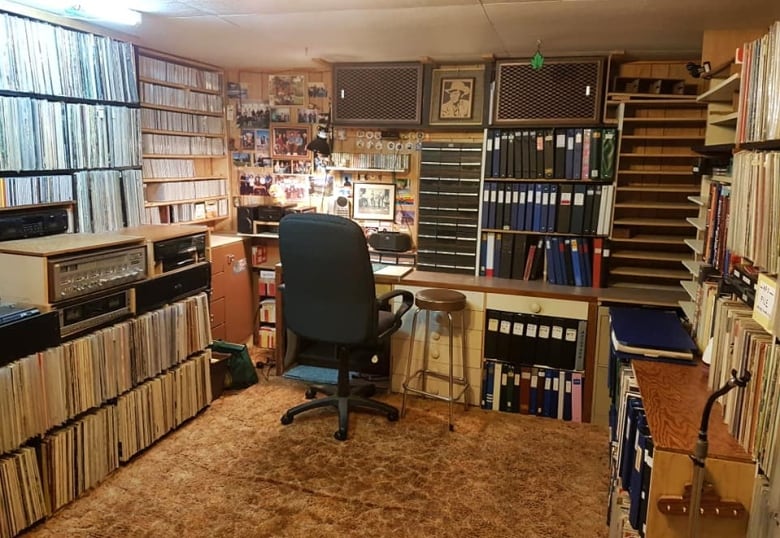 Jackson says her dad could most often be found in his music room. (Submitted by Amanda Jackson )

“I think I rebelled a little bit away from the country music, but I love all music, so I think that comes from my dad,” she said.

Back when he was a teen buying up records, his mom, who grew up in the Depression, advised him that he probably had enough.

“To us, it’s priceless, really,” she said. “The most important thing is that it goes to somebody that will love it and appreciate it.”