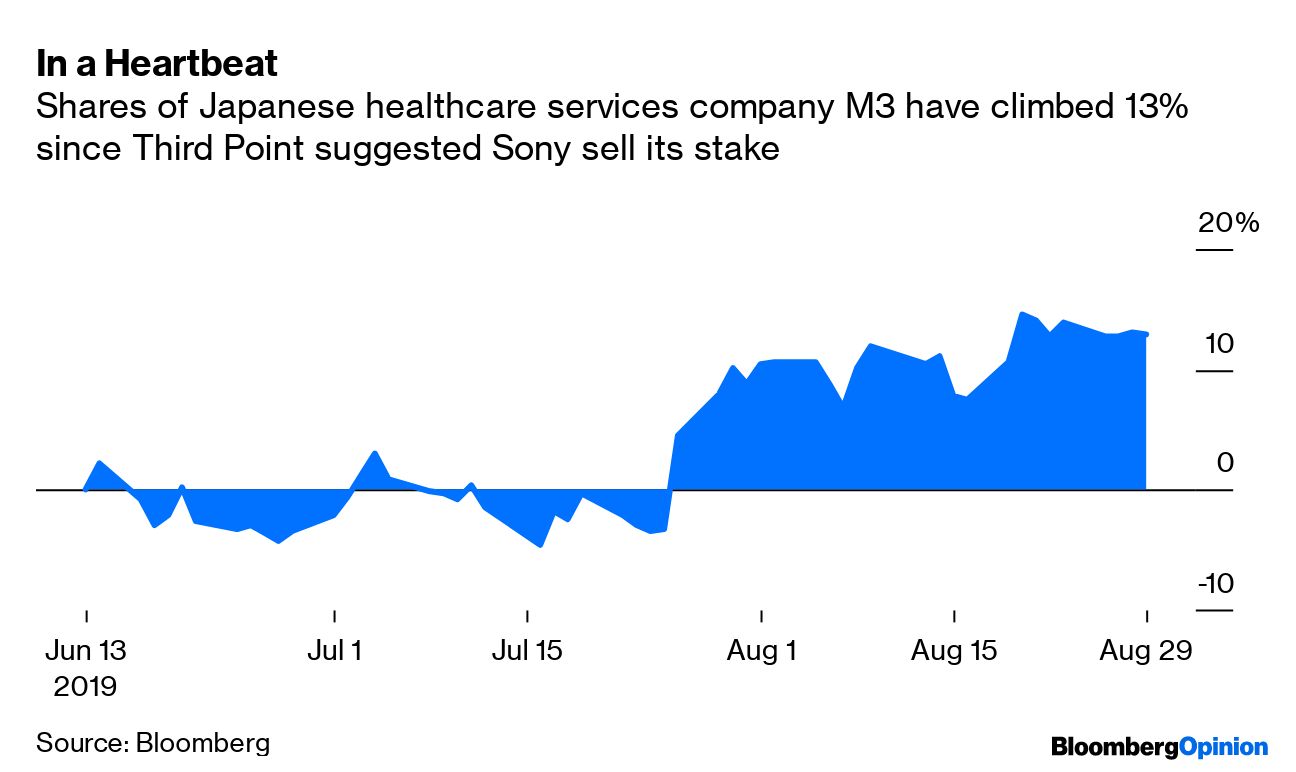 Dan Loeb’s team is unlikely to be popping champagne corks over Sony’s decision to sell its stake in Olympus Corp. Investors in Japan have reason to put a few crates of bubbly on ice, though.

The sale was a mere side note on the laundry list of changes that Loeb’s Third Point LLC asked for at Sony, in an eight-page letter published June 13. But on Thursday, that’s exactly what the Japanese electronics giant did, agreeing to sell to sell its 5% interest back to Olympus for 80.4 billion yen ($760 million).

The speed of response shows how the long-held (and well-deserved) view that Japanese board rooms and C-suites are stubborn, conservative and slow-moving is becoming outdated.

Abenomics, the moniker given to Prime Minister Shinzo Abe’s economic revival program, is most closely associated with fiscal stimulus and quantitative easing. Yet structural reforms were the third arrow in the strategy, and one of the results has been to push for a rethinking of the way companies operate.

Abe’s government is on a corporate governance kick, and activist investors are taking note, as my colleague Nisha Gopalan has written. Volta Global, Reno Inc., and Sparx Group Co. are among names seeking to shake up boardrooms, she noted. Successes have followed: Reno, a vehicle of activist investor Yoshiaki Murakami, got a seat on the board of Kuroda Electric Co., for example.

Not every campaign will result in a home run. They don’t need to.

Loeb’s bigger goal at Sony is to see the spinoff of its semiconductor division into a standalone listed company called Sony Technologies, which his team estimates could have a $35 billion valuation within five years. Selling Olympus shares for $760 million pales in comparison, but it’s a good start.

It would be a leap of logic to suggest that the Olympus divestiture portends a Sony Technologies spinoff. Sony’s board may simply be throwing Loeb a bone. Or it could indicate that the company is picking the low-hanging fruit from Third Point’s list before tackling the tougher task of splitting the company in two.

Third Point also named healthcare solutions provider M3 Inc., music-streaming company Spotify Technology SA, and Sony’s financial unit as holdings that ought to be divested. Given that Sony has sold its shares in Olympus, which is focused on medical devices, an M3 sale wouldn’t be a surprise. Spotify may not be as easy an exit given the stake’s potential strategic value, but Sony’s board may decide to relent on that, too.

Any of these moves would be a victory for Loeb. More importantly, the optics of listening and responding favorably to investors bodes well for the broader Japanese market. Having board members at an iconic name such as Sony swallow their pride and take external advice may inspire smaller companies to follow its example.

That’s a victory worth celebrating.

To contact the author of this story: Tim Culpan at [email protected]

To contact the editor responsible for this story: Matthew Brooker at [email protected]

This column does not necessarily reflect the opinion of the editorial board or Bloomberg LP and its owners.