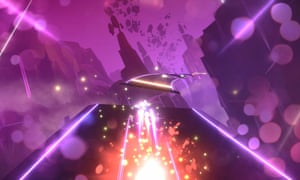 The search for this year’s Christmas party video game may be over. Following the rejuvenated interest in the “rhythm action” genre brought about by titles such as Beat Saber and Tetris Effect, Avicii Invector takes the cerebral visual immersion of the latter title and plants it in a beautiful, fast-paced beat experience.

Made in collaboration with the superstar DJ and producer Avicii, AKA Tim Bergling, before his death last year, Avicii Invector sees you zooming across a series of gorgeous intergalactic landscapes in a WipEout-esque spacecraft, hitting buttons in time to the music on a glowing board reminiscent of the classic Guitar Hero interface. Adding to the trippy aesthetic, the gameplay has you flipping the play space 180 degrees at a time, with interludes of racing through midair rings in time to the beat. Think of Sega’s Nights Into Dreams set to a series of 25 infectious club hits.

With so much emphasis on art and audio, there was always a risk of style over substance. But the almost hypnotic blend of rhythmic tapping and gliding create a compelling flow state experience – at least that’s when you manage to master it. There are three difficulty settings, but even on easy, the game presents a significant muscle-memory-reliant learning curve that will be familiar to Rock Band and Guitar Hero veterans.

Progress is rewarded with intercut, voice-acted animations that pop up between levels as your space pilot character, Stella, completes missions across six in-game worlds. A split-screen local multiplayer option turns the game into a party, and this is where it really shines, the anthemic soundtrack making it just as suitable for a pre-club warm-up as it is for Christmas family fun.

An early iteration of the game was released in 2017 for PS4 as Invector, but, following Bergling’s death, Hello There Games has finished the project as he intended, with a visual update, new tracks from 2019 album Tim, a multiplatform release, and Avicii branding slapped across it. The latter move could have been a cynical posthumous cash-in, but the result is a fitting musical tribute and an immersive way to enjoy the work of this EDM pioneer.

A portion of the game’s royalties will go to the Tim Bergling Foundation, a charity set up by the songwriter’s family to support science-based research into the causes and prevention of suicide, particularly among young people.