Lovers of fine music had a wonderful treat on the weekend with some of the best players in the world in town for the 18th Bangalow Music Festival, presented by Southern Cross Soloists.

The program included favourites and less well-known pieces by the masters, including Bach, Mozart, Rimsky-Korsakov and Rachmaninoff, as well as exciting new works from Australian and international composers, including Joe Chindamo and John Psathas.

After opening with young piano prodigy Alex Raineri alone at the Steinway playing Chopin, the festival presented a kaleidoscope of different musical configurations including duos, trios, quartets and even a guitar quintet. Players filled the Bangalow A&I Hall stage to overflowing for the most ambitious works.

The discovery of the festival was the clarinettist Ashley Smith, who demonstrated exactly why he’s in such international demand with an astonishing array of performances across a wide variety of styles. Dancing with his instrument, he leaves the impression of being so good that he can transcend rules and boundaries. Who knew it was possible to play two notes at once on a clarinet? It was thrilling to listen to someone right on the edge of control but never losing it. A true superstar.

The 22 year old mezzo-soprano Xenia Puskarz-Thomas was another stunning discovery, singing a selection of arias from Mozart and Mahler, and explaining the meaning behind the songs with humour and grace. 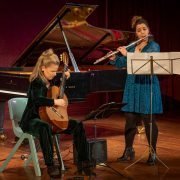 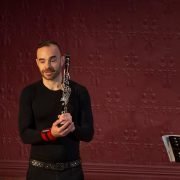 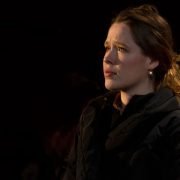 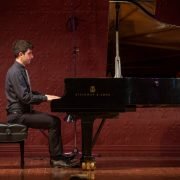 Tania Frazer was everywhere at this festival, both behind the scenes as Artistic Director and as principal oboeist in a number of fine performances. In her opening remarks on the festival’s theme of ‘conversations through music’, she spoke of musicians’ role on the early Silk Road in defusing hostilities and communicating without words, a process which continues today.

Guitar soloist Karin Schaupp was a revelation, especially when teamed with members of the Orava Quartet, four young men with dress sense as snappy as their performances. Hearing her virtuosic guitar in this context made me wonder why there wasn’t more repertoire for this instrument, which Schaupp explained doesn’t descend from the lute but from ancient Egypt. A festival highlight was her performance of an unusually optimistic, later version of Rodrigo’s famously sad Aranjuez, ma pensée.

When asked what was special about Bangalow compared to the great concert stages of the world, Schaupp said ‘playing in this intimate place with dear colleagues is very satisfying. It’s a close experience with a lovely audience who are with us for every note, so I will keep coming back!’

Among many other highlights, the incredible speed and deft touch of Blair Harris on the cello was beautiful to witness, as was the interplay between the visiting New Zealand Chamber Soloists.

The conversational element of chamber music was on display throughout the festival, with no conductor for many of the concerts, leading to intense concentration by the musicians upon one another, as well as the intentions of the composer. When conductor Chris Dragon was also present on the stage he lit up proceedings, losing his baton in one particularly exuberant moment.

Almost thirty musicians took a turn in the musical spotlight at one time or another in this festival, and all shone. Whether playing a solo or supporting role, the standard of musical proficiency on display, not to mention spirit, was extraordinary. Audiences were carried to many magical places.

The finale concert, Scheherazade, was a tour de force from fifteen performers, led musically by first violin Alan Smith, who was playing a 1770 instrument by Jose Contreras. His final, fragile note was very moving. It was followed by a well deserved standing ovation from a packed house.