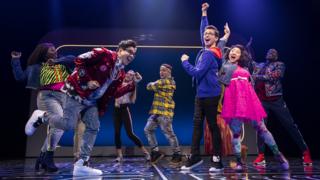 Be More Chill is set to open at The Other Palace, a theatre owned by Andrew Lloyd Webber

A new musical which became a word-of-mouth hit in the US is set to open in London after a successful Broadway run.

Be More Chill, which has been praised for attracting a new teen audience to the theatre, will open at The Other Palace in February, the BBC can reveal.

The pop-rock, sci-fi musical tells the story of an anxious teenager who takes a pill in order to become more popular.

The soundtrack has played a large part in making the show a sleeper hit – racking up 300 million streams.

“Ever since its sellout off-Broadway run, the show has become a hit with the best kind of social-media word of mouth powering its progress to Broadway,” wrote Tim Teeman in The Daily Beast.

“It has brought, so observers have noted, a younger audience to the theatre. It has caused great excitement and created extreme fandom.”

Be More Chill originally premiered in 2015 at the Two River Theatre in Red Bank, New Jersey. It had a limited run there and little was made of the cast soundtrack which was quietly released on streaming services.

In 2017, the number of online listeners to the recording started growing, and the show began to attract a cult following, particularly among young people – most of whom hadn’t seen the show, but still created Tumblr pages, YouTube videos, blogs and art fiction in tribute to it.

As a result, the show was revived by its creators the following year, first as an off-Broadway production before it transferred to the Lyceum Theatre for a run on Broadway.

“I’m a little older and so I’m used to word-of-mouth being telling my friends about an amazing show or movie,” Be More Chill’s producer Jerry Goehring tells BBC News. “And in the old days we had radio that would play a song and it would be popular. Word of mouth would happen in different ways.

“Well today, clearly it happens online. When I first heard about this show from Joe Iconis [who wrote the music], there was something like 10 million streams of a CD that had just been released. Now fast forward to the off-Broadway run, and suddenly there were 100 million streams, and now we’re well over 300 million streams.”

Describing the storyline, he explains: “It starts out as a standard boy-has-a-crush-on-a-girl story. And he really wants to date this girl but he’s kind of the nerd who doesn’t fit in, and she’s quite a quirky young lady, she doesn’t quite fit in in her world.

“And then we go into a little bit of sci-fi, where now this guy says ‘hey I’ve got this pill here, and if you take it, it’s basically a super computer that will implant itself in your brain and tell you how to act the right way and see the right things so that you fit in.

“It’s kind of like your alter-ego is going into your head, and it will tell you how to get that girl, how to dress right, how do you become the cool guy?”

From the premise, it’s not hard to see why the show has found a young audience. The more traditional theatre critics, however, weren’t so convinced.

“For much of the two-and-a-half hours this critic was dreaming of future Broadway shows, where producers did away with all these familiar ingredients, the safe white face with their nerd/outsider/not-so outsider-actually problems and safe and predictable story and character tropes,” said AD Amorosi in Variety.

Mashable’s Erin Strecker added: “Be More Chill doesn’t grapple with the issues right in front of its face. It wants to say something profound about the pressures of being a young person in 2019, but instead settles for a stereotype-filled retrograde story straight out of the ’80s.”

Goehring responds: “Maybe some of the older, more staunch industry reviewers, felt like ‘you can’t tell me what’s good and not good just because you like it’.

“We brought a piece of theatre which was brought to the stage ultimately by the people that responded to it, and who would’ve thought a show that’s so not in the mainstream of commercial musicals, but a small musical that has heart, actually made it to the Broadway stage?”

He adds that the themes of the musical resonate with a young audience in a way that might be missed by more traditional theatre reviewers.

“Young people for some people don’t have the same filters that older people have,” Geohring says. “They can look under the hood a little bit and look at all the issues that this show has that it doesn’t wear on its sleeve. We don’t talk about suicide or bullying – that’s all there, but we don’t preach it. It’s not written that way, you have to look just under the surface to see these things.

“And I think younger people who have a more keen sense of writing that is not on your sleeve, they got it right away. Those that come in and take it at face value and don’t look a little under the surface at those issues, I think it’s easy to take that point of view if that is your inclination.”

Composer and lyricist Joe Iconis has previously said musical theatre is the perfect language for teens to explore themes such as this.

“Teenage characters are going through the same things adults are, they just don’t have the vocabulary to express themselves, or they haven’t built up the walls adults do,” he told The Guardian last year.

“There’s this idea in musical theatre that you sing when your emotions are too big to do anything else but sing. For me, that’s the teenage experience.”

Be More Chill opens at The Other Palace in February 2020.