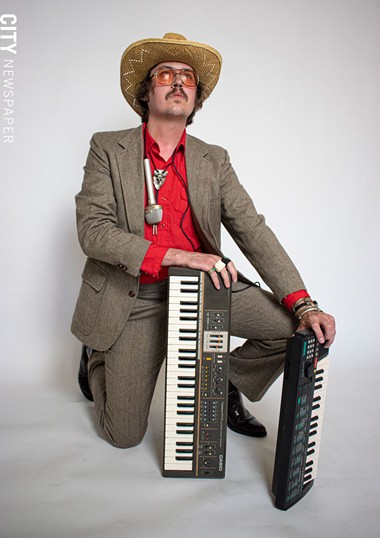 PHOTO BY JACOB WALSH Rochester musician Beef Gordon is an offbeat crooner whose stage presence is somewhere between shady and chic. Beef Gordon is different than most Rochester musicians. He’s technically a singer-songwriter, but you won’t find him strumming a guitar or playing at a piano. Instead, Gordon is more of an offbeat crooner, accompanied on the stage only by a microphone and prerecorded keyboard tracks. Conspicuously dressed in vintage clothing (seemingly snatched from the 70’s), large-rimmed glasses with a rose tint, and occasionally a “Maid of the Mist” nautical captain’s hat, he resembles a lost character from the film “Fear and Loathing in Las Vegas.”

Gordon’s stage presence might be described as somewhere between shady and chic. He sings in a charismatic but shaky baritone about shadowy adventures, and in between verses, his posing and dancing alternates between suave and awkward. On the debut full-length album “Queen Shade & Etc.,” for example, he jumps headlong into what could be a toxic relationship on “Queen Shade” and tries to evade the authorities for ambiguous reasons on “Don’t Call the Cops.”

The backstory on Gordon – the eccentric alter ego of Buffalo Sex Change guitarist Phil Pierce – is admittedly murky. On social media, Gordon refers to himself as both an ex-evangelical Christian and a former white-collar criminal. A conversation with the man reveals nothing conclusive: He grew up with a keyboard around the house and the religious music of the rock band Petra and the a cappella group Glad. As a teenager, he once did missionary work as a mime in Belize, but he didn’t take to it. He speaks vaguely about embezzling money at a previous job and skipping town after an acquaintance of his went missing for a brief time – an episode he details in the as-of-yet unreleased track “Beige Corolla.”

It’s difficult to distinguish between creative embellishment and reality in the music and persona of Beef. “I would say it’s emotionally honest, but not always literally truthful,” Gordon says. “It sets the record straight for me. I think if somebody else who was maybe in one of my songs heard it, they would not think that that was very truthful. But it is honest to my feelings.”

Gordon acknowledges that contradiction is embedded in his approach to the music. “Beef was a way for me to hide,” he says, “and then I started doing music, and now it’s giving me more attention, which is not what I intended.”

Gordon is a self-aware artist who seems to embrace the cognitive dissonance in his lyrics as well as in his creative approach, particularly as it relates to his religious background. On the song “Snake in the Grass” (set to appear on the forthcoming album “The Ballad of Beef Gordon,” tentatively slated for release on December 20), he is sprung from jail after a three-day stint and lands in a seedy bar, where he unsuccessfully tries to pick someone up. He promptly thanks Jesus for his freedom.

Though the effect can be unsettling, Gordon doesn’t shy away from mixing the licentious and unethical with the sacred. “I think a lot of good art comes from shame,” he says, maintaining that being transparent about past mistakes provides context for the present. 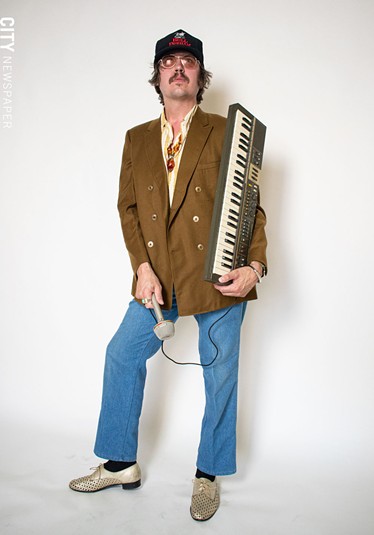 Although the costumed band may come off as comedic kitsch now, The Village People were groundbreaking for the transparency in their music about living a sexual lifestyle that was considered taboo in the late 70’s and early 80’s, Gordon says. “What I’m attracted to is seemingly those who are kind of liberated in a way,” Gordon says. “They put on a costume and they could be themselves.”

When it comes to Gordon’s musical approach, he gave himself parameters for stripped-down instrumentation – a lower singing voice and a Casio keyboard – that would be direct and simple, while avoiding potential chaos. He wanted to avoid using too many instrument tracks, which he says would make the music sound excessive.

“A lot of music is boring – slow r.p.m.’s – or it’s just really heavy, bro kind of stuff,” Gordon says. “I wanted to do something that was simple, but moving, and not following all the rules of how pop music should be.”
Whatever Beef Gordon’s ultimate aim may be, it’s clear he doesn’t want to be accused of being uninteresting. “I don’t want to be bored,” he says. “I want to be excited. And all I’m trying to do is be exciting to somebody else.”