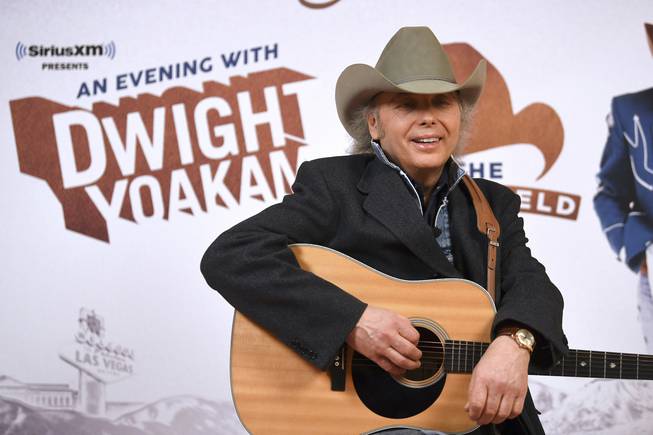 Of course there’s country music in Las Vegas this weekend! That’s usually the case, but with the National Finals Rodeo in town, it’s all country, all the time … almost. Catch some comedy, holiday tunes or Beatles classics with this week’s Best Bets.

DWIGHT YOAKAM Many of the multitude of country acts hitting Vegas stages this weekend are Strip regulars, but that’s not the case with the Grammy-winning musician and acclaimed actor who made his Wynn debut at Encore Theater Wednesday night. Backed by the Bakersfield Beat, Yoakam takes his audience on a comprehensive journey to the roots of the California country-rock sound for five more shows this month. December 6-7, info at wynnlasvegas.com.

JASON ALDEAN One of the most recognizable names in country music today makes a triumphant return to the Strip with a three-show rodeo week run dubbed “Ride All Night Vegas” and we’re all hoping Aldean will come back for a proper residency after his 2020 tour behind brand-new album “9.” December 6-8, info at parkmgm.com.

RODNEY CARRINGTON He’s a country singer and a country comic and he’s back in his NFR home at MGM Grand’s David Copperfield Theater all week long. December 6-8, info at mgmgrand.com.

IT WAS FIFTY YEARS AGO TODAY TOUR Psychedelic rock pioneer Todd Rundgren, pop singer Christopher Cross, The Monkees’ Micky Dolenz and others team up to pay tribute to the Beatles’ landmark 1968 “White Album” in this innovative concert tour landing at the Westgate International Theater Saturday night. December 7, info at westgateresorts.com.

LAS VEGAS PHILHARMONIC CLASSIC HOLIDAY Take your pick: The Phil does its Baroque Holiday show including Handel’s Messiah on Friday night at 7:30 p.m. at Reynolds Hall at the Smith Center, or you can catch one of two Classic Holiday Saturday shows (2 or 7:30 p.m.) featuring talented singers Kristen Hertzenberg and Travis Cloer and favorite tunes like “Deck the Halls,” “Little Drummer Boy” and “White Christmas.” December 7, info at lvphil.org.