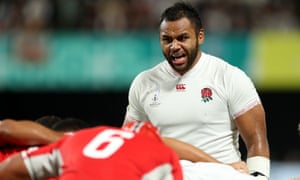 In its front page wrap of Saturday’s match the local paper here, the Hokkaido Shimbun, was pleased to report to its readers that everything had gone off smoothly at the Sapporo Dome, with the exception of a single subway train to the ground, which had run precisely three minutes late. The express that hit Billy Vunipola during Sunday’s game, on the other hand, arrived right on time. It was called Zane Kapeli, and it caught him flush in the chest just as he was breaking into a sprint up field off the back of a lineout. Vunipola staggered backwards, fell flat on his backside, and blinked in disbelief.

Vunipola said he had been waiting for it. Tonga’s coach Toutai Kefu had warned him that his team were going to enjoy trying to “get into Billy’s face and smash him”. Kapeli seemed to take particular pleasure in it. He came at him like a rhino making a desperate charge at the safari park fence in a last bid for freedom. Vunipola got back to his feet, and grinned sheepishly at his teammates. “I was waiting for it,” he said, “but it still took me by surprise a little bit.” He admitted it was “probably my fault, I told Fordy to give it to me. I gave them the opportunity, and they took it,” he said. “They came and got me.”

The blow won the Tongans a penalty, which Sonatane Takulua lined up while seismologists around the Pacific rim double-checked their equipment looking for the source of the recent tremor. The decision might have gone the other way. Kapeli hit Vunipola low, but he led with his shoulder. “Oh to be honest I wasn’t thinking too much about the details of where my arms were,” he admitted later. “I just put my head down and hoped for the best.” His best was plenty. In six years of Test rugby, no one has ever hit Vunipola like that. But then, like Kapeli said, “there’s definitely a bit of edge to it when we’re facing those Tongan fellas”.

Those three were the only points Tonga won all game, but if the match had only been reckoned in bruises, they would have come out even-stevens. “That was a tough, tough match,” Vunipola said. He was happy to come through it. He had spoken before the game about what a strange occasion it would be for him. He was born in Sydney, and grew up in Wales and England, but he thinks of himself as being both English and Tongan, just like his father, Fe’ao, who captained them the first time they played England in a World Cup, at Twickenham back in 1999. “If that’s the case,” Kefu said, mischievously, before the match, “he should be playing for us.”

The Breakdown: sign up and get our weekly rugby union email.

Vunipola’s eyes kept darting up to the big screen so he could watch the Tongans singing their national anthem, which he knows all the words to, and after the match, he joined a group of them in a prayer. “He played well against his brothers, didn’t he,” Eddie Jones said, “that’s not easy to do.” He really did have family on the other side. His grandparents were cousins of the grandparents of Tonga’s prop Vunipola Fifita. But still, Jones was being generous. By his own standards, Vunipola struggled to get into the game. It did not help him that Kapeli seemed to keep picking him out for special treatment.

Kapeli made 10 tackles in the match, and at least four of them were on Vunipola. He cleared him out of a ruck with a tip-tackle that turned him leg over head, and caught him with a chop on the shins as he burst off the back of a five metre scrum on England’s line, too. That one brought him down like a California Redwood. On the odd occasions Vunipola did manage to get up and running, legs pumping, he always seemed to end up being sucked into the orbit of Tonga’s 25-stone roadblock of a prop, Ben Tameifuna. He’d have had better luck charging the Stay Puft Marshmallow Man.

Vunipola’s not the only man who is going to feel a few conflicting emotions during the tournament. Around a fifth of the players here qualify for more than one country. The previous day the crowd at the Sapporo Dome had seen two men born in Australia playing for Fiji take on three men born in Fiji playing for Australia. Eight of this Tongan squad were born in New Zealand, two more in Australia. Some of them even dabbled with playing for other countries, their centre Cooper Vuna even played two Tests for Australia in 2012, a couple of his teammates played for their U20s team, another was in their sevens set-up. 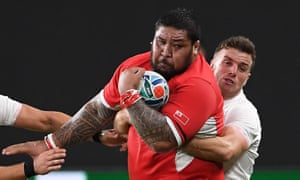 Billy Vunipola always seemed to end up being sucked into the orbit of Tonga’s 25-stone roadblock of a prop, Ben Tameifuna, here being grabbed by George Ford. Photograph: William West/AFP/Getty Images

Vuna said he wants to persuade Vunipola to come back and play for them when he is finished with England. Vunipola was not having that. “I am who I am,” he said, “I’m proud to represent England, I’ve worked my whole life to be where I am right now and it’s not something I’d turn my back on. It’s just that I know who I am and where I come from.”

• Sign up to The Breakdown, our free rugby union email newsletter

Kapeli’s been on a journey of his own. He is 26, just like Vunipola. But while Billy went off to become a superstar in England, he has been playing rugby league for the Waiheke Rams, and working as an apprentice builder in Canterbury.

“We haven’t seen many people do that to Billy before,” I told him when we were talking after the game. “No,” he said, “but then I haven’t played a lot of footy in the UK.”