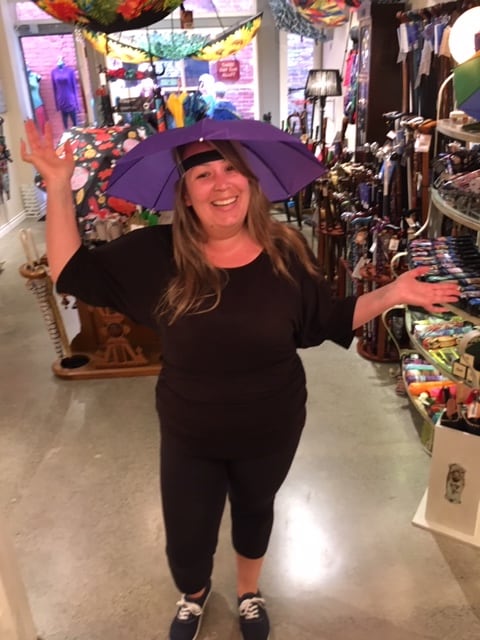 The umbrella hat has traditionally been viewed as a novelty item — a gag gift from the 1980’s that is best forgotten. But the questionable fashion statement is threatening to make a comeback.

Updated versions of the head accessory have made recent appearances on the catwalk, in rap music and even as Olympic merchandise.

Lyra Riley with The Umbrellatorium and Canery in Victoria B.C. said the store started selling the hat just over two years ago.

“My business partner looked at me like I had lost my mind,” said Riley. “But business has been brisk ever since.”

The store sells about 150 umbrella hats a year with patterns ranging from rainbow colours, to camouflage, and palm trees.

Customers still buy them for a gag, while others use them for protection from the rain and sun during outdoor concerts and sporting events.

“It’s not the sexiest look,” said Riley. “But they do have some genuinely practical aspects to them, and they are oddly comfortable too.”

At the 2019 Video Music Awards in August, rap legend Missy Elliott’s performed a medley of her hits which included a number where her backup dancers sported glossy rain slickers and umbrella hats.

“Anything Missy Elliott does is a hallmark of being amazing,” said Vancouver style blogger Alexandra Grant, editor of To Vogue or Bust.

Despite the endorsement, Grant believes that even the most fashionable among us would have a difficult time looking good in an umbrella hat.

“I just don’t see it taking off as a trend at all,” she said.

The “hat-brella” was unveiled by Tokyo’s mayor in July. The updated version has a special UV protective coating to keep 2020 Tokyo Olympic volunteers cool during Japan’s extreme summer heat and humidity.

And Italian luxury fashion brand Fendi turned heads in 2018 when the HeadBand Umbrella made its debut in the fall and winter collection.

Lyra Riley with Umbrellatorium in Victoria, B.C. says people of all ages come in to buy umbrella hats. (Submitted)

Online retailers like Amazon and Walmart sell the hats for much less, with hundreds of reviewers saying they like them for practical reasons.

One reviewer bought several for an outdoor graduation ceremony. “They were the HIT of the crowd.”

Another wrote: “Put this bad boy on right before a rainy tailgate and everyone looked at me with jealous rage. It was the best day of my life.”

The umbrella hat won’t likely become mainstream in Vancouver any time soon. But it does provide a bit of goofy levity during Vancouver’s long, grey rainy season.