LOST wartime musical works from the battlefields of World War I are now available to the public after the “Flowers of the Great War Collection” was officially launched in a gala day for Chris Latham yesterday (November 11).

Latham, “The Flowers of War” director and first musical artist in residence for the Australian War Memorial, formally handed the collection to the Ambassador of France, Christophe Penot, in front of representatives from France, Belgium, Germany, Portugal, Austria, the UK, the EU and Australia’s national institutions, who were on hand to receive copies from Governor General David Hurley of the book packed with information about lost wartime musical works from the battlefields of World War I, recorded, documented and performed by Latham and his band of supporters since 2015. 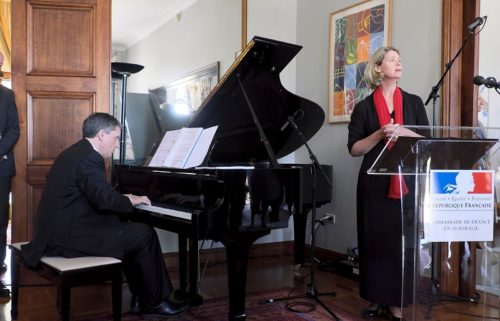 Among them were pianist Alan Hicks and his mezzo-soprano wife Christina Wilson, who had been in on the project from the outset and travelled to Amiens, France, in April this year for the world premiere of “The Diggers Requiem”.

Before they performed a song included in the collection, Hicks told those present how his visit to France had put him in touch with a personal family connection to the Great War.

Then it was time for Latham to perform, on violin, a work by the musician he considers the greatest musical loss in World War I, the pianist and Olympic rower who died on the Western Front, Frederick Septimus Kelly.

Members of the public can download most of the collection (except for Kelly works still under copyright) free from theflowersofwar.org