If you’ve never heard a lick of her music, you’ll likely have the wrong idea when you see her in photos.

“Oh, hell yeah, because racism is real,” she says. “They don’t expect me to do what I’m doing. I’m not playing to any kind of trope, which can be confusing to people who don’t have any black friends.”

We see a dark-skinned black woman with bountiful natural curls, she says, and have immediate expectations of how she sings. R&B belter or a gospel shouter with a powerhouse voice to part your hair. Maybe a club diva of thumping house music. Or perhaps she’s a backup singer in the band.

At 36, Yola revels in upending those stereotypes. Born Yola Carter in England to parents of Caribbean and African heritage, she’s a singer-songwriter who’s reshaping our perceptions of American roots music.

The Recording Academy was impressed too, nominating Yola for four awards at the upcoming Grammy ceremony: three in the Americana categories and a nod for best new artist (alongside commercial juggernauts Lizzo, Billie Eilish and Lil Nas X).

“Walk Through Fire,” Yola’s warmly received full-length debut released in February, is Americana painted in broad, pastoral strokes, the kind of record meant to be played from start to finish. It’s cozy — with the grace and economy of early Roberta Flack — but also unflinching in how it processes heartache and the redemption and self-actualization that often follow.

“Your art has to tell your story, and you have to show it as much as talk about it, you know? It’s all the more important, specifically for a portion of the black community [that’s] darker than Oprah, if you will, that really don’t get a just representation,” Yola says on the phone recently from Paris, where she’ll perform that night.

“So yeah, it seems so simple, the subject matter of this record about heartbreak, about being broken. But it’s not something that’s expected from somebody who looks like me.”

She’s lived the tales she revisits on “Walk Through Fire.” The title track can be taken literally: Yola survived a house fire in which she was engulfed in flames. “Ride Out in the Country” is a breezy ode to the simple pleasures of a road trip, but its accompanying video hints at darker undertones. She buries what looks like her dead doppelganger to bid farewell to her former self and an abusive relationship she escaped.

Produced by Dan Auerbach of the Black Keys, the album skirts the fringes of roadhouse country, dusky soul and majestic 1960s pop, with Yola often singing with restraint to make the climactic moments more meaningful. She could blow your house down but would rather knock on your door to tell you her story.

Someone sent Auerbach a video of Yola performing live, and he was baffled that she wasn’t already signed before joining his Easy Eye Sound label.

“Come to find out, she’d been coming to Nashville for years, trying to get a break from all these different labels in town and nobody paid any attention,” Auerbach says. Yola’s been living on the road recently but plans to put down roots in Nashville soon.

Enlisting a cast of musicians who had played with Elvis Presley, Dusty Springfield and Johnny Cash, Yola and Auerbach co-wrote the songs for “Walk Through Fire” in about a week.

“We didn’t do a lot of talking about music,” Auerbach says. “We just started writing and she was wide open and I was wide open. A lot of the songs on the record have such a natural feel to them because they came so easy.”

It paid off. For January’s Grammys, “Walk Through Fire” is nominated for Americana album, with breakout track “Faraway Look” vying for American roots performance and American roots song (the latter of which scored a nomination for Auerbach, who’s also up for producer of the year, non-classical).

No one is more rattled by the Grammy recognition than Yola, who has triumphed over hardships that could have derailed someone less assured of her calling: poverty; racism in the small town where she grew up just outside Bristol, England; and even her own mother’s disapproval.

“My mother was not keen. It’s quite a typical thing in black and brown parentland. You’re either a doctor, a lawyer or an engineer, or don’t even bother,” she says.

Her mother, who was from Barbados, died in 2013 before Yola’s career took off, but she eventually appreciated that her daughter’s talent was being recognized. Not that Yola needed permission from her or anyone else.

“The good thing is I’ve always been confident in my voice,” she says. “I said to my mother at age 4, I want to sing and write songs. It wasn’t a ‘maybe I’ll get into it.’ It was like, ‘this is happening.’ What I’m doing now is what I’m supposed to be doing.”

Her ascent this year has been swift, ushered in by high-profile admirers such as Elton John and Brandi Carlile. A testament to Yola’s wide appeal, country-pop sweetheart Kacey Musgraves took her out on the road as her opening act, and she’s shared stages with Greta Van Fleet, Dolly Parton, Massive Attack and James Brown. (Yola’s headlining show at the Troubadour in West Hollywood in February is already sold out.) 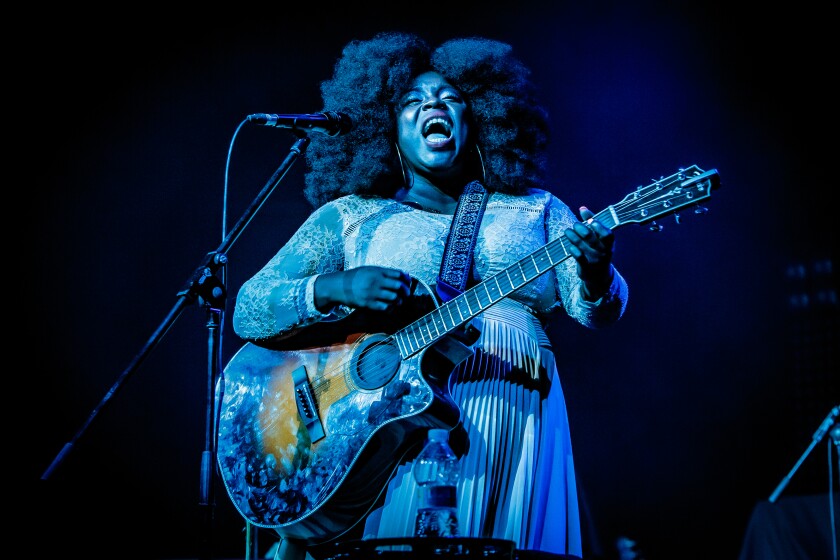 Yola opens for Greta Van Fleet at Alcatraz in Milan, Italy, in November.

Carlile invited Yola to be an honorary member of the Highwomen, this year’s country supergroup of Carlile, Maren Morris, Amanda Shires and Natalie Hemby. (“You get a lovely golden necklace,” Yola says of the perks of being an adjunct member; she also sang on the quartet’s No. 1 country album.)

And while Yola’s success has defied the odds, she asserts she’s certainly not the first artist to blaze this trail, noting the legacy of Charley Pride and Lil Nas X’s hybrid of country and trap music this year. Linda Martell, an African American country singer from South Carolina, had a hit with 1969’s “Color Him Father.” And Yola is in good company with other contemporary women of color, including Rhiannon Giddens and Mickey Guyton, who are making important inroads into Americana and country music.

“The erosion of bias is probably the one thing that can make music endlessly better — letting people just be good regardless of who or what they are,” Yola says.