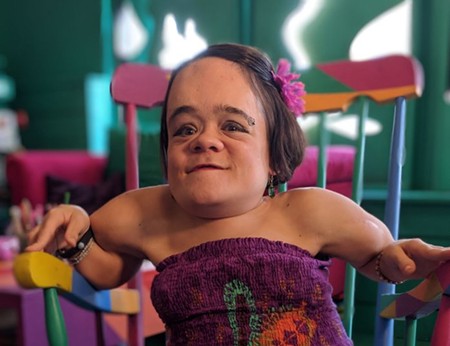 Violinist, singer, and songwriter Gaelynn Lea has been playing music since she was a child, but it was relatively recently that she started writing songs. Her natural ability for songwriting paid off, garnering her critical acclaim as an artist and even landing her a notable appearance on NPR’s Tiny Desk Concert video series.

Lea initially planned to become a lawyer and disability rights advocate, but her passion for music took over quickly and her path was diverted. Lea, who has osteogenesis imperfecta—a genetic condition that affects bone and limb development—still advocates and speaks publicly about disability rights in conjunction with music tours.

She’ll be doing just that when she arrives in Savannah on Fri., Dec. 6 for a show that evening at Ships of the Sea Museum, followed by a public forum and discussion on disability awareness and pride the following morning. Ahead of her performance, we chatted about her work and much more.

How old were you when you started playing music? Do you remember what it was about music that drew you to that form of expression?

I started when I was pretty young in a public school orchestra—I was 10 years old. Early on it was just something I did that was fun and challenging and creative with my friends. When I started performing, which was a lot later in, like, 2006, that became more about expression in a more personal way. I started writing songs in 2012, and that’s when it made it even more intense.

Around the time I started writing, I was also going through some anxiety issues, so it was something that I could connect with even when things were tougher.

Your NPR performance blew me away. It also inspired me as fellow musician with a disability, who’s always felt there was a lack of representation in the industry.

It’s cool to hear that you noticed the representation thing, because it wasn’t until I started touring that I noticed that I’d never seen anyone perform with a disability when I was a kid. You’re like, “Oh, I didn’t even know I was missing that.” Now kids and adults with disabilities come to my shows. It matters to me when I see other disabled artists perform, but it’s something you don’t always realize wasn’t a part of our cultural experience.

Exactly! The only musician with a disability that I really had as an example when I was young was Vic Chesnutt.

Yeah! He’s someone I wasn’t familiar with until more recently.

Who are some of your more prominent influences as a songwriter?

Musically, some influences are artists like Simon & Garfunkel. I was really impacted by the lyrics of their music, and they used strings frequently as well. And in college I got into bands like The Decemberists, Wilco, and Neutral Milk Hotel. Especially with The Decemberists and Wilco, what attracted me was the idea of challenging what a folk song was.

I love those bands too. Wilco in particular takes a lot of artistic license with what would normally be considered folk and roots music and they get really weird.

Which I love! As far as writing, getting to know Alan Sparhawk from the band Low—we had a project together that was pretty active in 2012 called The Murder of Crows. He introduced me to the looping pedal. One day he gave me my own pedal and said, “You should learn how to use this, and one day you’ll perform by yourself.” He was right [laughs]. It really expanded what I could do. He was hugely influential.

What’s in the pipeline for you? Are you always working on new projects?

I released a single in September called “The Long Way Around,” and there’s a music video for it. I’ve been on the road for three years basically, so I’ve been making albums really in between tours. One of the albums I mixed in the car, so it’s been pretty on-the-go. I want to write new music, but I really want to write a book because the last few years of my life especially have been pretty intense [laughs].

I’ve been doing a lot of speaking on disability rights and pride, and I think it’d be really cool to do a book that combines doing music and touring and the idea of disability as diversity. That’s where I want to see our dialogue start going, because the more I meet activists the more I think that if we include disability pride as part of diversity, we can celebrate it a lot more.