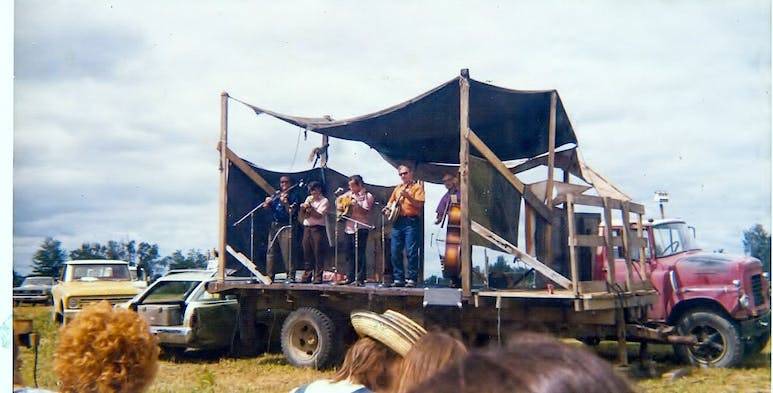 Music rooted in tradition and Americana echoes across the wooded, rolling hills of Wheatland Township. Plucks of strings, the sound of a bow raking across a fiddle and the pounding of dancing feet blends to create the soundtrack for the weekend. Participants all around are learning, or teaching, music and art.

The Wheatland Music Festival is not just about listening to the music, it’s also about learning it.

Since 1974, the festival has been bringing together music lovers from all over the country to Central Michigan to hear traditional music styles, including bluegrass, folk, Celtic, blues and early country. The 46th Wheatland Music Festival, which begins Friday, will celebrate traditional music and provide workshops for aspiring musicians as well as dancers, storytellers and crafters.

The biggest music festival near Mount Pleasant, that you may never have heard of, is sold out Friday and Saturday. If you do plan on going Sunday to take advantage of a ukulele workshop or to watch Canadian folk trio De Temps Antan let us be the first to wish you, “Happy Wheatland.”

While the festival has always taken place in Remus, the idea for it was hatched by a group of Central Michigan University friends. They wanted to feature traditional American music while providing a festival with a more laidback, “homemade” feel as opposed to rock festivals like Woodstock.

Former CMU student Bruce Bauman and a group of his friends were turned onto traditional string music from Dick Tarrier. The musician recommended some local festivals and string bands for Bauman and his friends to check out.

Going to these festivals inspired the group of friends to start producing their own shows.

“We started to dig a little bit deeper into our interest of presenting music,” Bauman said. “We (attended) all these little festivals, and you go see how it runs. We started thinking ‘boy, we could probably do that.’”

The friends’ first experience booking musicians came in 1972 from running a free, one-day concert at locations such as Island Park and Big Rapids.

Organizing these events was helpful for networking with musicians who they would later book for future festivals, Bauman said.

The first Wheatland Festival in 1974 took place off of M-20 in Remus and lasted  just one day from “noon till dark.” Unlike today’s version of the festival, the first iteration was a fundraiser to benefit the Mount Pleasant Food COOP, known today as Green Tree Groceries.

By the next festival, the group found what would become the festival’s permanent home. Bauman said a local resident, Mark Wernette, attended the first festival and suggested he had a better place for a festival than the dusty cornfield which served as the first site.

Wernette and his wife, Gladys, allowed the friends to use a section of his farm for the festival. Years later, the farm was bought by the Wheatland Music Organization, which has remained the home of festival ever since.

After a stormy, two-day Wheatland in 1975, Bauman said the festival became a three-day festival in the following year. As for why the group decided to book traditional music performers, Bauman said when they began organizing the festival, they were only a few years removed from the Woodstock Festival. He said there were plenty of rock concerts, but the group wanted something with a “homemade” feel.

“You don’t need to have a truckload of equipment for a string band,” Bauman said. “All these years later, that’s still what (Wheatland) is.”

For those who have organized the festival over the years, Wheatland stood out from the other Michigan festivals. Pamela Burke, who has been a volunteer since Wheatland began, said the event stood out due to its participatory nature. Participants at Wheatland have the ability to go up to artists to learn and play music with them.

“Here in mid-Michigan, there was largely commercial bluegrass festivals that had the big beer banners. But it wasn’t the kind of music that was interactive,” Burke said. “You couldn’t go up and play music with the presenter. It was very much just the audience and the stage.”

Wheatland continued to grow in popularity from the mid-1970s. Year after year, new memories were made, new bands were brought it and new additions were made to the festival. By 1980, the festival already had its own record label, with six albums already released, Burke said. 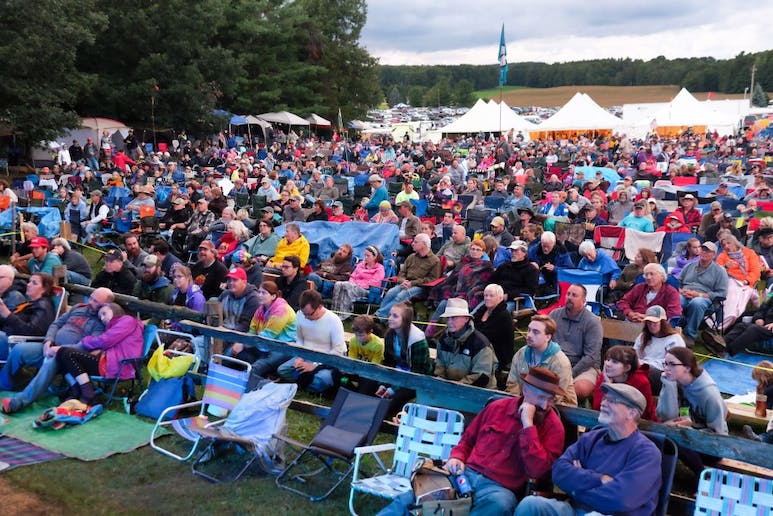 John Shefler was one of many local radio hosts who played recordings he made of bands performing at Wheatland on his show. Burke said Shefler started by recording performances on a cassette recorder before moving to better recording equipment in the 1980s. These recordings are still stored in the Wheatland archives.

But Wheatland is known for more than the musical performances. Workshops and education have long been a part of the festival’s existence. Bauman said the original core group of friends started having dancing groups, such as cloggers, to the festival.

The festival committee also began to take notice of the local talents and heritage-art performers from around the area by the early 1980s, including quilters, dancers and storytellers. Many continue to present workshops that are found at Wheatland to this day.

Just eight years old, Nic Gareiss was inspired by the dancing he learned at Wheatland Traditional Arts Weekend. From there, and his first festival in 1997, he began meeting all his dance teachers and learning about dancing through Wheatland programs.

With decades of Wheatland in existence, there is certainly no shortage of memories made from those who have attended. Bauman said there was a moment from the early 1980s that he still remembers. It happened during a performance of Irish band, De Danann, who was Wheatland’s first international band. During a particularly dusty Sunday performance, they began playing to a thinned-out crowd. As the band got everyone up and moving around in a circle, he said a ring of dust was kicked up during the festivities.

“People were dancing their feet off in a circle around the rest of (the audience) who remained seated,” Bauman said. “It was hot and dry, and the dust was over their heads. It was amazing.”

Burke said she and others would gather around in a big circle after the music ended for the day and hold “joke-offs.” These weren’t scheduled, but always just happened. She said kids, to this day, still line up after the gospel hour on Sundays to tell jokes into the microphone.

Along with memories, plenty of notable musicians have graced the stage at Wheatland. Tom Ball, the chairperson of the Wheatland Program Committee, said that he’s been attending the since the sixth festival. Ball said he’s seen his fair share of musicians play, including De Danann, Highwoods String Band, Mike Seeger (Pete Seeger’s half-brother) and Robin & Linda Williams.

Ball became a program director in the late 1990s. One act that Ball said he’s proud of booking was bluegrass/country singer, Alison Krauss. He said that Krauss was “coming into her own” the year she played Wheatland.

One memorable moment during Ball’s time as program director wasn’t even planned on his part. In 2014, country musician Rodney Crowell was booked for the festival and Ball assumed that only he and his band were going to show up. However, there was a surprise with Crowell when he arrived.

Out from the tour bus came Tom Hiddleston, the actor who is famous for playing Loki in Marvel movies such as “The Avengers” and “Thor.” Ball said he was there with Crowell, because the musician was mentoring him for a movie about county music legend Hank Williams. Hiddleston took the stage to perform some songs with Crowell during the festival.

Wheatland is still going strong today. Tickets for Friday and Saturday are sold out. Tickets are still available for Sunday. To many organizers and regular attendees, more of the same entertainment can be expected for Wheatland this year as from the past.

Gareiss will be returning to Wheatland this weekend when he performs with his group, Alasdair Fraser and the New World Assembly.

As for Bauman, who hasn’t been directly involved with the festival since the late 1990s, he’s been bringing his fiddle to Wheatland to play and teach people how to play it since.

“You learn to play, and you find some others you want to play with,” Bauman said. “The idea of making music at home with your parents and your kids. That’s what it’s always been about.”

For a schedule of this weekend’s festivities, here is Wheatland’s website.