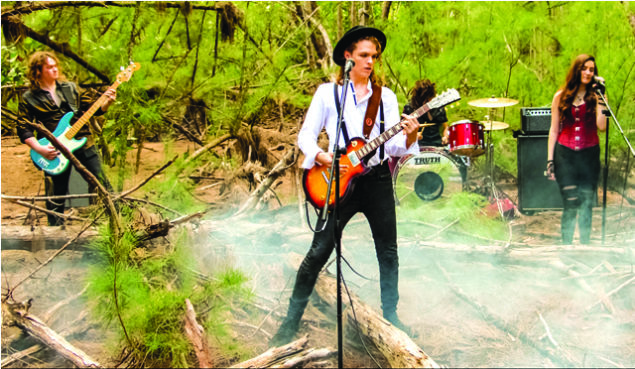 Having had to pick themselves up from their guitar straps after navigating their way through some turbulent times, Gibson, the iconic guitar brand, made a triumphant return to Summer NAMM 2019 that took place July 18-20 in Nashville. The NAMM Show is an annual event in the US that its organizers describe as “the world’s largest trade-only event for the music products, pro audio and event tech industry”. NAMM (National Association of Music Merchants) represents the $17 billion global music, sound and entertainment technology products industry and serves the crossroads for professionals seeking the newest innovations in music, recording technology, sound and stage products.

Former Levi Strauss & Co. CEO and now newly- appointed CEO, James “JC” Curleigh along with CMO, Cesar Gueikian and the Gibson family made a pact to return to NAMM not with “smoke and air guitars”, but to come back to NAMM in a big way to define a new era for Gibson that will build on its proven heritage and iconic status. They lived up to this promise and were without a doubt the “ROCK STARS” of the NAMM show with an enormous booth that took up the center of the convention show floor. Gibson guitars lined the right and left sides as well as the back wall of the open area booth. At the front were Gibson reps available for assistance. Down the middle of the booth were Gibson craftsman demonstrating how the guitars are crafted with hand carvings, inlays, hand binding, and setting of the frets on the neck of the guitar. Center and slightly to the back of the booth was the Gibson stage. It was prominent and well-lit with magnificently large blue lights engulfed in netting.

Included in the Gibson line-up of artists included Aventura Marketing Council/Chamber of Commerce’s own Young Star, Mason Pace. Mason will be performing for the fourth consecutive year with his new original music at this year’s event, the INTERIORS BY STEVEN G/ 10th annual Aventura Mall YOUNG STARS SHOWCASE presented by Mount Sinai Medical Center and AT&T on Sunday, November 10th, at the Aventura Arts & Cultural Center. Mason was invited to be a Gibson artist to give two performances at this year’s Summer NAMM. His first show was a two- hour set on the Gibson Welcome Stage at the Nashville Airport and the second, onstage at the Gibson Guitars Booth center stage at Music City Center.

“My first guitar was a Gibson Les Paul. It could not have been a more perfect fit as I absolutely love my Les Paul and it is definitely my “go to” guitar for all of my big shows. To be a part of such an incredible tradition of great guitars and be a part of the Gibson family was truly special,” said Mason.

Mason Pace and Mason Pace Band are on the rise with the industry’s most iconic brands. He has opened for bands such as Cheap Trick and Joan Jett and co-headlined alongside Night Ranger, Ace Frehley of KISS and Vince Neil of Motley Crue at last year’s RockFest Concert at Miramar Amphitheater. He has headlined alongside Edgar Winter and Patty Russo at the Beatles on the Beach Festival. He was also invited to be on the red carpet with Vanilla Ice for the Palm Beach Film Commissions – South Florida Student Showcase of Films awards and has won “Best Artist” and “Rising Star” Awards at the Richmond International Film Festival.

You can follow Mason on Facebook and Instagram and subscribe to masonpacemusic.com for updates on his new album which will be released soon. His current album, “Whateverland” is available on all streaming platforms including Spotify and iTunes. To see Mason and other Young Stars perform at the Aventura Arts & Cultural Center on November 5th, visit aventuracenter.org; 877.311.7469 or 954.462.0222; AACC box office Tues.-Sat. noon-5 pm


Connect To Your Customers & Grow Your Business