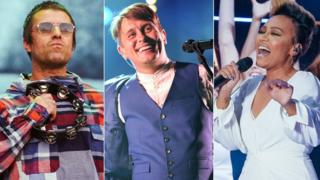 Liam Gallagher, Mark Owen and Emeli Sande will be introducing their own songs

Liam Gallagher, Mark Owen and Emeli Sande are to lead a doorstep sing-along to celebrate the community spirit shown in the Covid-19 lockdown.

Manchester’s Together In One Voice event will invite people to join in with an online stream of songs from “doorsteps, windows, balconies and streets” at 19:30 BST on Thursday.

The stream will feature seven songs recorded by choirs in isolation.

James singer Tim Booth, who will lead a song, said the event was “critical”.

A city council spokesman said the sing-along was designed to “celebrate the spirit and importance of community in these unprecedented times”.

“The one-off event aims to unite people from across the whole Greater Manchester region,” he added.

Community choir versions of seven songs have been recorded for the event:

They will be introduced by a host of stars with connections to the city, including rapper Aitch, Liam Fray of The Courteeners and singer Denise Johnson.

Booth said he was “keen to support people in any way I can”, adding: “Events like these are critical right now for the community.”

Musical director Dan McDwyer said it had been “a huge task recording the choirs” but said it would be worth it if everything went to plan.

“What a moment it’s going to be when those choirs, all singing in their bedrooms, are amplified by thousands of voices across Greater Manchester,” he said.

Council leader Sir Richard Leese said it would be a chance for people to use the “magical power of music and reconnect again with their neighbours and communities”.

Footage from the event, which the council hopes to capture through drones, street cameras and residents’ own phones, will then be edited together for an extended broadcast on MIF Live on 31 May.