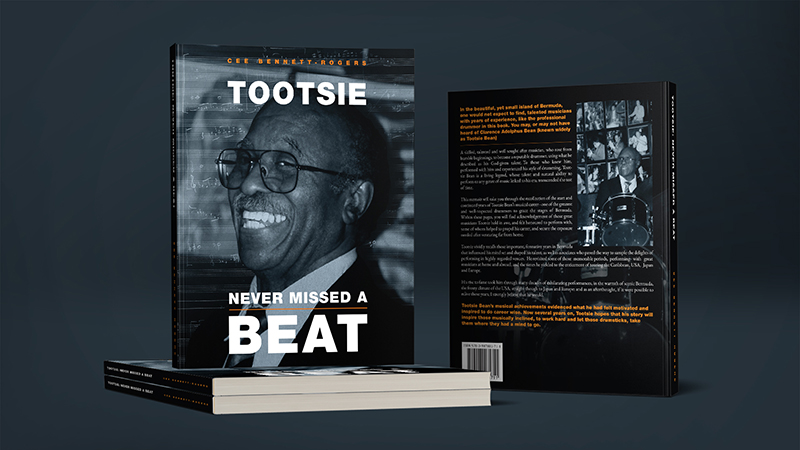 A new book – Tootsie Never Missed A Beat – has been released, with the book chronicling the life of legendary Bermudian musician Clarence ‘Tootsie’ Bean.

Donna Raynor said, “We, the Bean family, would like to advise that one of our dreams has been realized and become a reality by the launching of the book of one of Bermuda’s best and legendary drummers locally and abroad, Mr. Clarence ‘Tootsie’ Bean, ‘Tootsie Never Missed A Beat’.

“My dad is in his 90th year and has a story that will inspire those musically inclined to work hard and let those drumsticks take them where they had a mind to go. Set your goals and make them come true, nothing is impossible.

“This book showcases a talented Bermudian musician with years of local and international experience. His career spanned a period of 75 years during which he tutored and inspired many budding musicians to perfect and utilize their talent some of whom have since coined a name for themselves in the world of drumming.

“The book speaks to a few factors including the Bermuda Gombeys that sparked his interest in drumming and led to the awareness of his talent from his earlier years of his youth. His drum training in the US. How did he get the name ‘Tootsie’?

“This memoir will take you through the recollection of the start and continued years of Tootsie’s musical career, one of the greatest and well-respected drummers to grace the stages of Bermuda and the world.

“In the book you will find acknowledgement of those great musicians [Lance Hayward, Johnny McAteer at the Inverurie hotel, The Calypso Trio, Jon Hammond, The Counts Band, Irene Reid, Ruth Brown, Lionel Hampton, Gregory Hines just to name a few] whom Tootsie held in awe and felt honored to perform with. Some of whom helped to propel his career and secure the exposure needed after venturing far from home living in the US from 1979 to 2009.

“He also was able to fulfill many of his dreams by performing at the 1993 US Presidential Inauguration held at John F Kennedy Centre, the Lincoln Centre, Madison Square Gardens and Carnegie Hall.

“He has received many accolades and awards but has been extremely grateful to perform to an audience as he immensely has enjoyed his career regardless of location or with whom. Anyone who has seen him perform would never forget his trademark, his brilliant smile portrayed throughout his performing years as an expression of the great love he had for music and the satisfaction felt when in his element performing on stage. There have been media quotes about him ‘a man blessed with effortless charm and a smile that could melt chocolate’ ‘he may not be the tallest man but in terms of talent his stature is king-sized’.

“The book was written by Claudette Bennett-Rogers over a few years based on narrations from Tootsie and the book cover design and graphics by Domico Watson, his grandson.

“Due to the COVID-19 Pandemic the book can now be purchased from Amazon. Our hope is to get copies in Bermuda for sale eventually and to get this book in our schools.”