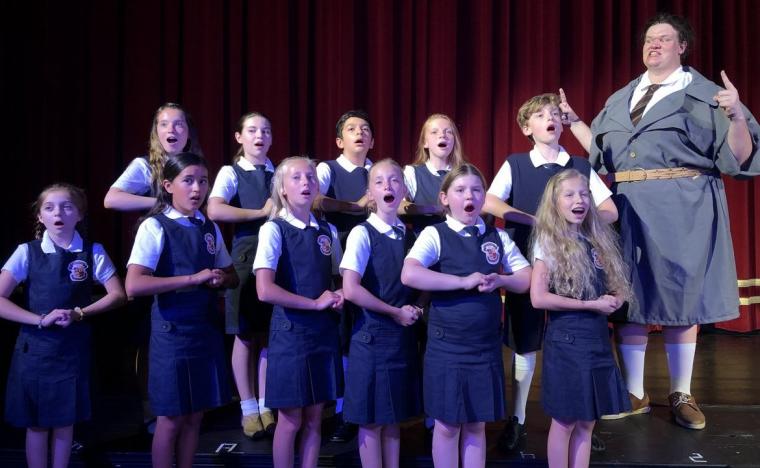 Within the first nine minutes of Sara Tubbs’ solo directorial debut of Matilda: The Musical at the Spotlight Theatre, Friday’s opening-night audience was clued into two things about the production: (1) The microphones had some issues, and (2) it almost didn’t matter, because of how much passion and energy this cast of 34 brought to the stage.

Based on Roald Dahl’s classic story, Matilda: The Musical is about a little girl, Matilda Wormwood (the small but mighty Tate Sommer), who is wicked smart, but whose talent is not recognized by her parents. Matilda, however, finds a friend in her teacher Miss Honey (Olivia Lyman), and together they stand against the evil headmistress Miss Agatha Trunchbowl (TJ Green, performing in drag).

The music in Matilda is wonderful across the board. Music director Megan Warren did a great job ensuring that the vocals were topnotch, but actual magic happened on stage when the excellent score coincided with Steph DeLacy’s choreography, especially during the larger ensemble numbers. Sommer’s Matilda is supposed to have superpowers, but, in this production, both the Little and Big Kid ensembles had their own superpowers, too: singing and dancing in unison so well. DeLacy’s choreography featured some sharp, exaggerated movements – it was exhilarating to watch a large group of children dance and sing with such gusto.

While the children’s songs were all great, the extremely catchy opening number “Miracle” hooked me almost immediately, especially Wrigley Mancha’s cheeky ballerina Lavender. By the time we got to the climactic “Revolting Children” number, led by powerhouse Brennan Hampton’s chocolate-cake-eating Bruce, I had actual chills of appreciation. Did I go full nervous-mother in “The Smell of Rebellion” when an actor came a bit too close to hitting her head in one of the flips for my comfort? Absolutely. But the daring feats were undeniably exciting. It was also a lot of fun to see the appearance of swings for “When I Grow Up.” (Let me just say it: If these capable kids stay active in the Quad Cities’ theatre scene, its future is bright.)

In contrast to the sight of these amazing children was the cringe-worthy laughter when the Wormwood home came into view, as this television-obsessed family provided extreme comic relief. Mr. Wormwood (Brent Tubbs) is both slimy and physical comedy gold, and simpleton brother Michael (Luke Seybert) speaks in single, repetitive words because he’s so zoned out in front of the boob tube. Together, the Wormwood gentlemen sing “Telly,” which was the perfect reintroduction to the show after intermission. Not to be left out, Becca Johnson gave Mrs. Wormwood, the amateur ballroom-dancing champion, an air of lackadaisical stupidity that also provided a ton of humor, especially when paired with her dance partner Rudolpho (Gary Mayfield).

The Wormwoods as a whole are pretty awful, but in a way that also makes them nearly endearing. However, their utter ridiculousness does garner quite a bit of sympathy for Matilda, and Sommer had everyone in the audience supportive of Matilda’s slightly “Naughty” behavior. It also isn’t any wonder Matilda often finds herself at the library with Mrs. Phelps (Myka Walljasper), telling imaginative stories about the Escapologist and Acrobat (Chase Austin and Christianna Crosby), characters who come to life before our very eyes.

Meanwhile, even though Miss Trunchbowl is deplorable and horrifying – just you wait until she sees the pigtail hairdo on Amanda (Taylor Tubbs) – Green brought a comedic quality to the role I really enjoyed, and with crazy eyebrows to boot. The sheer size of Green next to the children was scary-funny, as was his song “The Hammer.” And while I don’t think the script gave Miss Honey enough depth compared to Miss Trunchbowl, Lyman certainly sang the part beautifully, seeming every bit as sweet as her character’s name would suggest. Lyman was the perfect yin to Green’s yang. 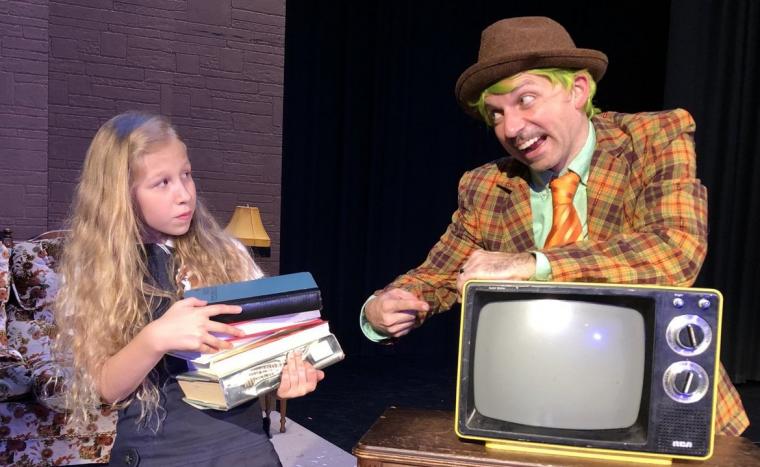 Director Tubbs had the cast employ British accents, which I don’t think was especially necessary. The accented singing occasionally made the production even harder to hear, and with the mics acting up throughout the evening, it would have been nice to keep the language as clear as possible. That said, Tubbs kept her cast busy, employing the Spotlight’s every aisle and entrance point. (Keeping Brent Tubbs’ lighting effects on its toes, characters would at times wander out of their light, but in such a huge space, it was easy to overlook those instances.) These moments of never really knowing where the action was going to come from maintained a buzzing energy in the theatre.

It’s also no small task to costume a cast as large as the one Matilda boasts, yet from the distinct uniforms among the big and little kids to the overwhelmingly tacky Wormwood garb, designer Alexis Lotspeich did a phenomenal job with Sara Wegener’s wigs, complementing the get-ups beautifully.

I hope Friday’s microphone situation got sorted out so everyone on stage can be heard for the remainder of the run, because Matilda: The Musical is a delightful romp with a sweet message: Even if you’re little, you can do a lot. And there is nothing little about the Spotlight’s production. It was clearly a huge undertaking, but ultimately delivered a distinctly magical evening that was a real crowd-pleaser.

Matilda: The Musical runs at the Spotlight Theatre (1800 Seventh Avenue, Moline) through August 11, and more information and tickets are available by calling (309)912-7647 or visiting TheSpotlightTheatreQC.com.