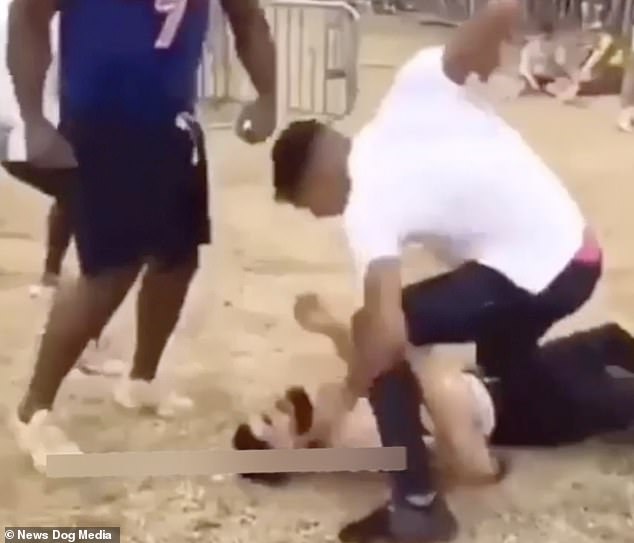 Shocking moment violent brawl erupts at London music festival where FOUR men were stabbed in one daySix men caught fighting at house and techno festival in Morden, south London  One is knocked out in the shocking footage amid spate of violence at the event Appalled fans can be heard shouting ‘he’s out’ as the scrap continues to rage

By Sebastian Murphy-bates For Mailonline

This is the moment a violent brawl erupted at a London music festival this weekend – where four men were stabbed in just six hours.

Footage shows six men fighting and one man being brutally knocked out at Eastern Electrics.

The appalling scenes were captured at the house and techno festival at Morden Park, south London, on Saturday.

Police were called after four men were stabbed in the space of six hours on Saturday. None of the injuries are thought to be life-threatening. It’s not clear the exact date the clip was recorded on this weekend.

The film starts with two burly men clashing, rolling over other revellers who are caught up in the melee.

Then one of the men seemingly runs away, but it quickly becomes apparent he’s just running back to another gang of people who are embroiled in a separate fight. The man he was fighting runs after him and clatters him sending him to the ground.

But he is quickly grabbed and surrounded and find himself on the floor with three men over him who reign down kicks and punches.

Pictured: Shocking scenes of violence at the house festival in south London this weekend, where a man was knocked out in this brawl

Sickeningly despite the pleas and the man clearly being knocked out, the yob continues to lands blows to his head.

The fallen man is then seen being aided to and is clearly dazed. There’s no suggestion that any of the men seen fighting in the video were involved in the stabbings.

According to reports, the first man to be stabbed at the festival was 24-years-old, who was attacked just after 4pm and taken to hospital. Just before 6.45pm another man, aged 27, was stabbed before being rushed to A&E. 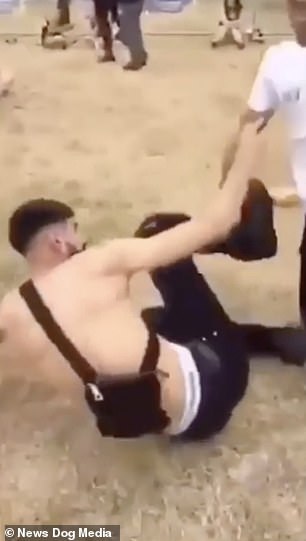 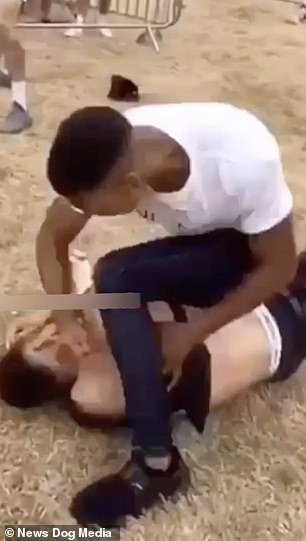 Pictured: A man can be seen climbing on top of the victim while landing blows on his head as bystanders claimed he’d already been knocked out

Paramedics had to then take a third man, in his 20s, to hospital after he was found with stab wounds at 9.38pm.

The fourth victim, a man in his 40s, was then found injured just before 10pm. No arrests have been made and enquiries are ongoing.

On Sunday, Merton police tweeted: ‘A section 60 has been authorised in Merton following four stabbing incidents in Morden Park yesterday. 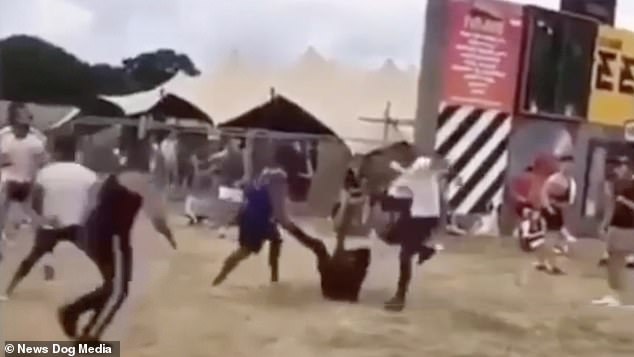 Six thugs were embroiled in a brawl at Eastern Electrics festival in south London, where four men were also stabbed in just six hours

‘The order, which allows a police officer to stop and search without suspicion, is in place until midnight tonight.’

The horrible events will come as no surprise to local residents who desperately tried to get the festival cancelled.

In the first year of the event in 2017, revellers entered nearby St Lawrence’s church who ‘defecated, urinated, vomited and performed sexual acts in the churchway as well as taking illegal drugs.’

Speaking to My London, Susan Liang, 61, said: ‘They left behind used condoms and nitrous oxide canisters for us to find the next day when we were attending church.’

She added: ‘In 2018 the church was fenced in with metal barricades, members of the church stewarded the churchyard for 14 hours on the Saturday and Sunday.’