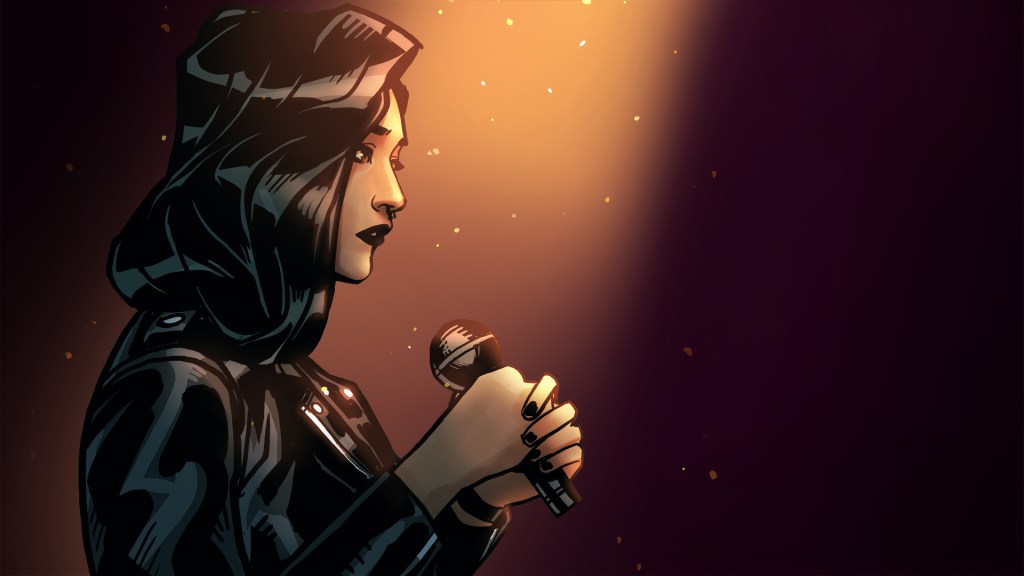 If David Gaider would’ve had his way, he would’ve made his musical game years ago — as downloaded content for Dragon Age: Inquisition. But his bosses at BioWare said no.

So now he and his new Summerfall Studios is making a musical game of their own. At PAX Australia on Friday, Gaider and crew announced Chorus, which has an urban fantasy setting. It’s not a role-playing game (Gaider’s been working on those for decades); they call it an “adventure musical.” The studio has launched a crowdfunding campaign on Fig, and Summerfall is working with luminaries such as Grammy-nominated composer Austin Wintory and voice actors Troy Baker and Laura Bailey to bring this to life.

Making a game that’s a musical is a innovative concept — something novel in an indie scene that continues to surprise and delight the industry and its fans around the globe.

“There are plenty of games where music has been a more important element, but I don’t think anyone has ever proposed a game where the music itself is interactive and involves making choices which actually affect the game’s story,” said Gaider, Summerfall’s cofounder and creative director, over email. “So it’s a very new idea.”

Summerfall’s clear that this isn’t an RPG — it’s something new and different.

“While Chorus has RPG elements, it’s definitely not an RPG!” studio cofounder Liam Esler said. “We’re calling Chorus an adventure musical — part character-driven narrative game, part interactive musical, part adventure game. It’s a bit of a genre fusion between the dialog-driven quests of the RPGs we’ve worked on in the past, adventure game style world navigation, and then interactive musical numbers where the player decides where the song progresses.”

While Summerfall is seeking $600,000 in crowdfunding on Fig, Esler said it’s already got two grants from Film Victoria, a state agency in Australia. “They are truly a tentpole of Australian game development and we can’t thank them enough,” he said. Gaider and Esler have also put some of their own money into the effort.

It’s time to play the music

Above: Grace prepares to sing in Chorus, the innovative musical adventure from Summerfall Studios.

The roots for Chorus go back to before Gaider’s time at BioWare, where he worked on Baldur’s Gate II: Shadows of Amn, Neverwinter Nights, and Star Wars: Knights of the Old Republic. He was the lead writer for the Dragon Age franchise, even writing comics and novels for the world he created.

Gaider loves musicals, and it’s his love of the artform that’s helping to propel Chorus.

“I’ve dreamed of making a musical since I worked at BioWare,” he said. “Half-jokingly, I tried to convince the managers on Dragon Age that we should make a musical DLC. They never went for it, of course, but it’s always been at the back of my mind as something which could actually be made and more people than just me would be really excited about the prospect.”

The press release Summerfall sent out noted, besides Dragon Age, that Game Grumps “dad dating simulator” Dream Daddy and the iconic “Once More, With Feeling” musical episode of Buffy the Vampire Slayer are among the team’s many inspirations. Dream Daddy is a beloved indie game, noted for its strong writing, good humor, and positive LGBTQ representation. “Once More, With Feeling” often appears as a top-10 Buffy episode on best-of lists, and it may be my favorite episode from the excellent show. As a fan of musicals, I listen to the music from that episode from time-to-time — it feels like an actual (and comedic) musical to me, not a one-off from an early 2000s TV show.

I’m not the only one that feels that way.

“The thing about the ‘Once More, With Feeling’ episode is that it’s a solid musical in and of itself. The songs are catchy, they bring all the plots which had been simmering the entire season to a head, and best of all, they’re all occurring in-world … the characters are actually singing, and it’s not simply a narrative device,” Gaider said. “Combine that with Buffy’s fantasy premise, and you’ve got something which is pretty close to what we want to do with Chorus.”

Esler and Gaider have some other musical inspirations (and as someone who spent a summer playing tuba in a production of Singing in the Rain, I’m so glad it’s not on their lists).

Gaider: “There’s a number I could mention here, from The Book of Mormon to Into the Woods, but I think my favorite would have to be the obvious: The Sound of Music. I honestly doubt I could ever write anything that wholesome, of course.”
Esler: “I’m a massive fan of Into The Woods and many other Sondheim musicals as well as Doctor Horrible’s Sing-Along Blog, Waitress, Hadestown, Hamilton, all of the musical numbers in Steven Universe, Rent, Dear Evan Hansen … sorry, I’m a massive musical nerd. I’ve done a lot of musical theater in the past, and have done an awful lot of songwriting that will thankfully never see the light of day — the experience of which now comes in incredibly handy.”
It’s time to light the lights 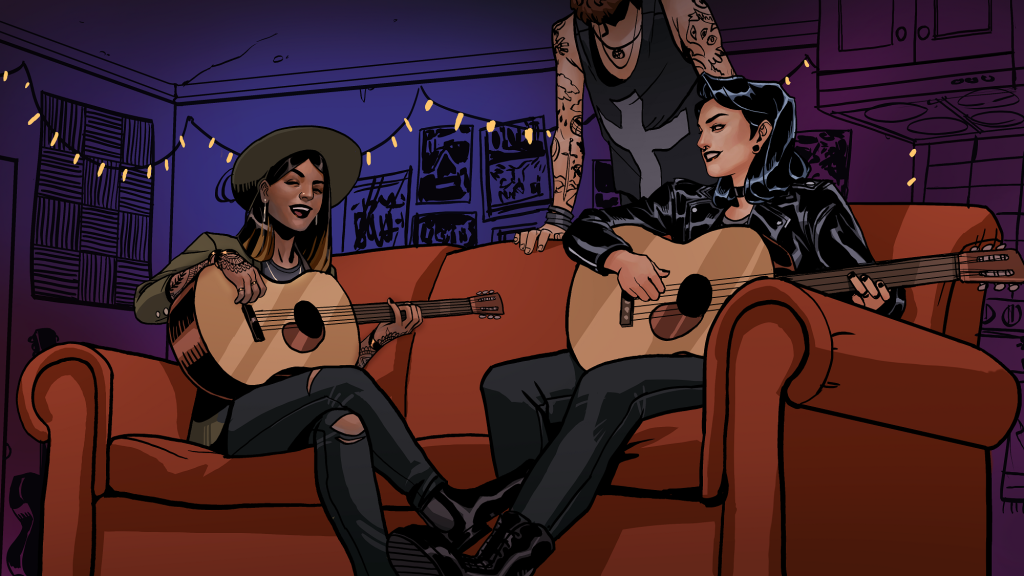 And that’s one of the reasons why Gaider and crew put Chorus into an urban-fantasy setting.

“When we were first talking about Chorus, we knew we needed an explanation for why characters were breaking into song — so we knew we needed a fantastical element, but we didn’t necessarily want to make a high fantasy game. So we picked a genre in between!” Esler said. “So many of our favorite shows, movies, and books have been urban fantasy — and while we’ve seen a few games like Life is Strange and The Wolf Among Us, we want to see more games explore what’s outside of games a massive, brilliant genre.”

It helps that Summerfall is enlisting Bailey and Baker. In game circles, he may be best known as the voice of Joel in The Last of Us and Samuel Drake in Uncharted. But you’ve likely heard him, well, many, many times over the years. He’s been performing in anime, cartoons, films, games, and TV since the early 1990s. He even has a few singing credits.

“The breadth and caliber of Troy’s work speaks for itself, but it was his passion for the idea of a video game musical that really impressed us,” Esler said. “When we spoke to him, it was clear we were very much on the same page about what kind of experience Chorus could be — we just clicked. He’s been a delight to work with.”

Bailey is a fan-favorite on Critical Role, the most popular Dungeons & Dragons live-play show. Like Baker, she has decades of experience in anime, cartoons, film, games, and TV. Like Baker, she also has some soundtrack credits.

I’ve covered a number of crowdfunding efforts for indie games, and I can’t remember ever seeing two such skilled and high-profile actors on the project. 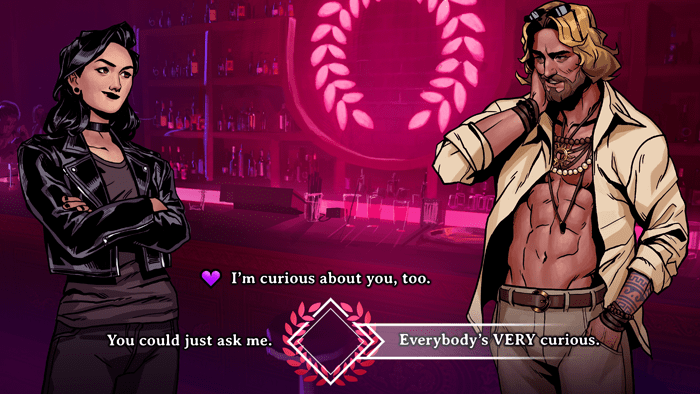 Above: Of course, mushiness and musicals go hand-in-hand.

“Not very often, though I imagine it depends on what kind of emphasis the project has on voice acting. Dialogue and singing are so integral to what Chorus is doing, we have to make certain we get the best talent we can working on it,” Esler said. “We can count our lucky stars that the nature of our project interests voice actors as much as it does us. This is a game where they, too, will get to do something different in games than they’ve ever done before.”

Summerfall is a startup, a small indie studio. Gaider has decades of writing experience, but he’s never done a musical before … and nor has Wintory, even though he’s done more than 300 scores for films and games, earning a Grammy nod for Journey’s soundtrack in 2013 (the first game to ever earn such a nomination). I wondered how they’d be able to harness everyone’s talents working on a project no one’s done before.

“Narrative design is my specialty, and I helped craft some of BioWare’s best stories over the 17 years I spent with the company, stories which were known for their strong characters, romance themes, and drama. It will be a challenge to do the same here, but I’m certainly eager to try!” Gaider said.

Finally, I had to ask: Does Gaider write musical as well as game narrative and novels?

“The truth is that I haven’t written lyrics before, outside of a single song for Dragon Age: Inquisition. I’ve been working on this since we began preproduction last year, and I found that making the music and lyrics branch based on the player’s choices was actually the easy part — that resembled the work I’ve been doing for the last 20 years. Writing evocative lyrics inside a song that ultimately tells its own story? A lot more challenging. Thankfully I’ve got both Liam’s and Austin Wintory’s assistance to figure it out over the next couple of years.”

I do have a theory, though: They should sneak in a song about dangers of bunnies as they work on it.