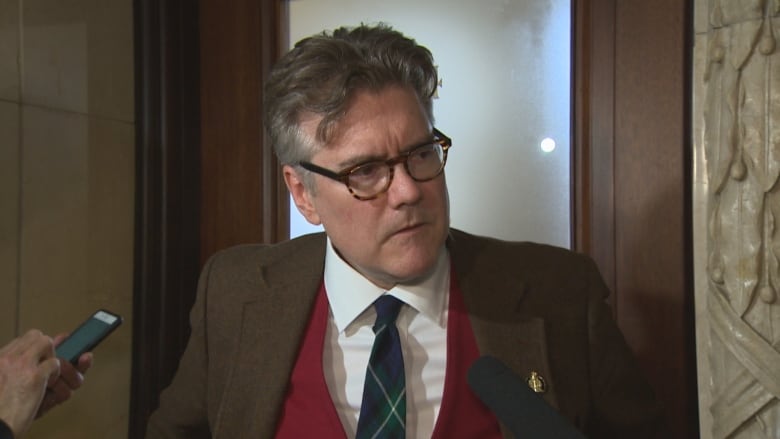 Dougald Lamont wants you to know he does not wear elbow patches on his tweed suit jackets but he will patch up the health care mess he says the Progressive Conservatives have thrust on Manitoba.

Oh, and a word of advice from the leader of Manitoba’s Liberal Party? Don’t do anything to embarrass your mom.

After spending years in communications jobs, doing freelance writing, running his own digital ad agency and working behind the scenes as an advisor to former Liberal leaders Jon Gerrard and Sharon Carstairs and MP Robert-Falcon Ouelette, the 50-year-old born-and-bred bilingual Winnipegger is in the spotlight.

Elected Liberal leader in October 2017, Lamont says his party is riding high as it heads into the Sept. 10 election.

“We have a full slate of absolutely amazing candidates — former mayors, lawyers, doctors, nurses … and we’re a more united party than we were before,” he said.

He sat down on Wednesday for a one-on-one interview with CBC Information Radio host Marcy Markusa, pitching his platform and getting personal.

Markusa: What would your children say that you are particularly good at?

Lamont: I think, maybe, playing music. They could agree on that.

The Lamont list of instruments includes guitar, drums, bass, piano and a little bit of harmonica.

L: It varies from child to child. My youngest son isn’t bothered but my daughter — my second daughter —doesn’t like anything I do, actually. Just about anything is like, “Oh, dad, come on.”

M: You’ve given policy and communications advice over the years to others. What is your best advice to yourself?

L: Talk about the big issues, don’t try to be anything you’re not, and don’t do anything that’ll land you on the front page of the paper and make your mother embarrassed.

M: What is success to you on election night?

L: At minimum it would be if we can take the PCs down from a majority so that they are not able to run roughshod over this province.

Manitoba Liberal Leader Dougald Lamont knows his penchant for dressing in suit jackets and vests can come across a bit professorial but insists he has never worn a jacket with patches on the elbows. (Gary Solilak/CBC)

Progressive Conservative Leader Brian Pallister and NDP Leader Wab Kinew will be in studio later this week. Green Party Leader James Beddome was in the studio on Tuesday.

Asked how he’s handling the image pressure as a party leader, Lamont smiled, knowing his penchant for dressing in suit jackets and vests can come across a bit stiff and serious.

He has been described as professorial but insists there is a clear distinction.

If Lamont has his way, he will wear out those elbows by working to repair the damage he says Pallister’s party has done to health care in Manitoba.

The Liberals have pledged to reopen the Seven Oaks Hospital emergency room and merge regional health authorities into one single body under Manitoba Health.

“One of the biggest problems with health care in Manitoba is that no one’s responsible for anything” because there is so much administration, he said.

“We have a crisis in accountability, so this is about making the system more accountable and less bureaucratic. Right now, we have four levels of bureaucracy.”

The father of four describes himself as “a bit of a policy wonk,” which led him to political back rooms and studying strategies and policies.

“I’m interested in ideas but that’s because ideas solve things,” he said.

But some of the Liberal ideas aren’t exactly unique. Many promises mirror those of the NDP — such as rescinding the wage freeze on public sector employees, increasing minimum wage to $15 per hour and reopening Seven Oaks ER.

Asked if he’s concerned voters might not see much variation between his party and the NDP, Lamont said the big difference is that his party will actually do something.

“A lot of these are issues we’ve been calling for as a party for a long time [and] the NDP haven’t acted on them,” despite holding power in the province for almost 17 consecutive years, he said.

“Part of the reason I wanted to come into politics was to make sure that people had a progressive option to vote for in this election. My issue with the NDP was often that … they talked a good game on many of these progressive issues but then didn’t deliver on the environment, or jobs, or inequality, or poverty.”

If elected, Lamont promised his government would clear the 16,000-strong waiting list for early childhood education within four years.

“The NDP plan will take 30 years to get rid of those wait lists — 30 years,” he said. “It’s the same thing with their climate change plan.”

“We’re being much more aggressive because, from my point of view, for too many people in Manitoba it’s been decades since their life has improved.”

Manitoba has not had a Liberal government since 1953, when it was a Liberal-Progressive coalition. The closest the party has come since then was 1988, when it won 20 seats and official opposition status.

In the 1990 election, the party dropped to seven seats and since then has not won more than three in any election, which it currently holds. In fact, since winning 20, the party has only won a total of 19 seats in seven combined elections.

However, Lamont believes his party is on the upswing.

“The leadership is different. We’re stronger than we’ve been in 25 years … and the NDP, frankly, are the weakest they’ve been in 50 years,” he said.

The NDP fell from 37 seats in the 2016 election to 14 in 2018 as the Progressive Conservatives rolled to a majority government with 40 seats.

Manitobans head to the polls in seven days and the leaders of the province’s four main political parties will be live throughout the week on CBC Manitoba’s Information Radio each morning in a bid to win over voters. Liberal Leader Dougald Lamont went Wednesday. 10:03

Sign up for CBC Manitoba’s newsletter for insight into the latest election news. Every week until the campaign ends, we’ll send you a roundup of what you need to know.