As if headliner Adam Sandler with special guests Eddie Vedder and Judd Apatow weren’t enough top-level entertainment for Sunday’s Rock4EB! fundraiser, during his nearly hourlong set Sandler brought his daughters Sunny, 10, and Sadie, 13, to the stage to sing Taylor Swift’s “Lover” as he accompanied them on the guitar.

“I love you, guys,” he said, turning to them as they waited to begin. “You’re excited? You’re nervous? It’s going to be OK. … This is the worst part, kids, just standing and not singing.” He then said jokingly, “How do you think I feel every … night I do this …?”

Adding yet another talent to the mix, Vedder asked Glen Hansard, singer-songwriter of the Irish group the Frames, to join him during his half-hour set, and the two sang, among other numbers, “Falling Slowly,” the Academy Award-winning song that Hansard co-wrote for the 2007 film “Once.”

“That was the same year I did music for ‘Into the Wild,’” Vedder, the Pearl Jam singer-songwriter, told Hansard, before saying jokingly, “That song’s why mine didn’t win the Academy Award.” The two then sang “Society” from the 2007 Sean Penn film. “This is a great song,” Vedder added, “and I can say that because I didn’t write it.”

Before the evening ended, Sandler, Vedder and Apatow teamed up to perform “Let My Love Open the Door.”

An affair easily worthy of the exclamation point in its name, Rock4EB! raised more than $900,000 to fund research and find treatments for epidermolysis bullosa, a rare, debilitating and life-threatening disease of the skin. 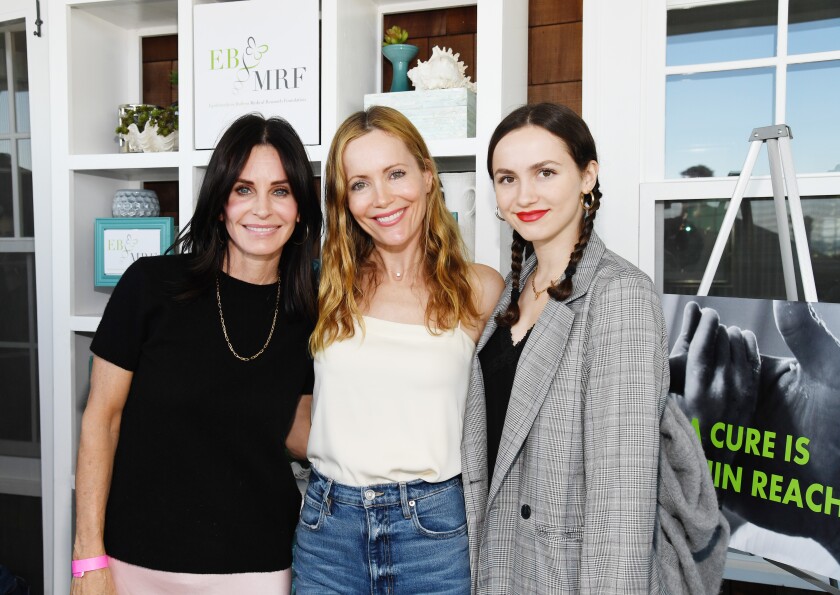 Famous faces poured into the Malibu home of Marc Gurvitz of Brillstein Entertainment Partners, where they found an abundance of food and drink options spread out on the spacious lawn overlooking the Pacific.

Following a brief interview outside the house, Julia Roberts gave Catherine Keener a hug before joining husband Danny Moder and their three children. Before stepping onto the lawn, Leslie Mann stood on the porch, searching the crowd for Apatow, her husband, and daughter, Maude Apatow. Catherine O’Hara, meanwhile, made her way to the swimming pool to place bids in a silent auction. 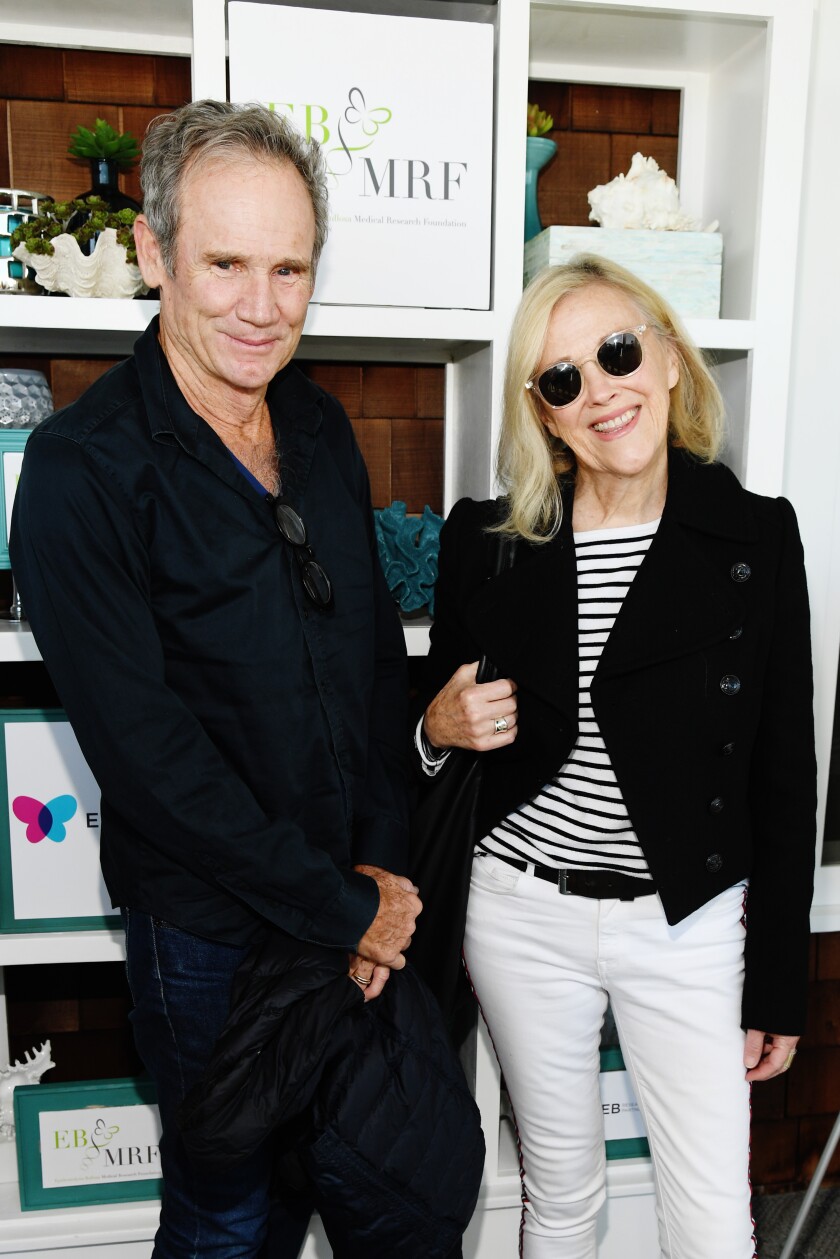 Bo Welch, left, and Catherine O’Hara at the Rock4EB! event.

Many of the same guests attend the event year after year, mixing not only with one another but also with people who have EB.

Courteney Cox said, “It’s so nice to come to these events and reunite with people you really care about and to know they’re doing OK. It’s a hard life for them. [Researchers] are making great progress but they’re not there yet.” 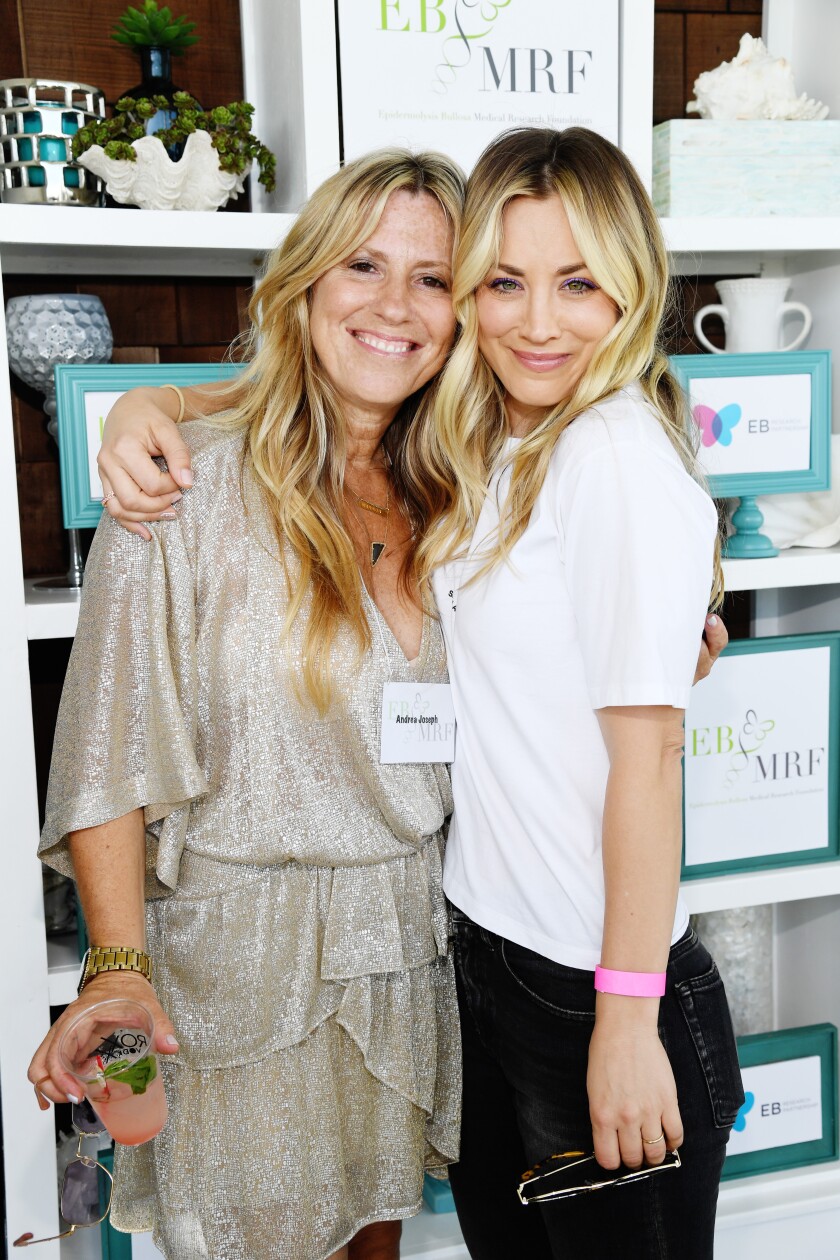 Andrea Joseph, left, and Kaley Cuoco at the Rock4EB! event.

Standing in a quiet spot by the pool, Kaley Cuoco talked of the child who last year asked to watch a taping of “The Big Bang Theory,” the CBS series of which Cuoco was a co-star. “He came to every episode, every Thursday night, and sat in the front row with his family,” she said. “We’re BFFs now, and we talk all the time.” 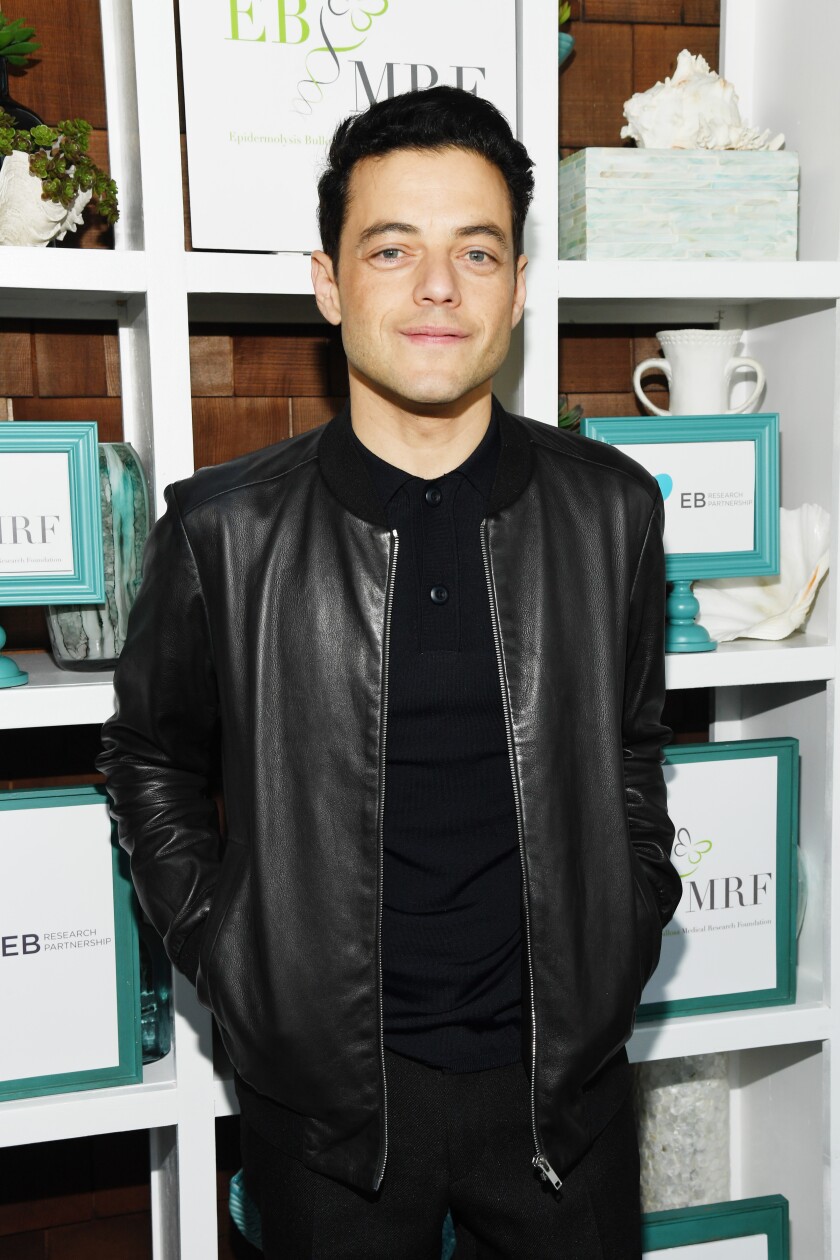 Rami Malek at the Rock4EB! event. 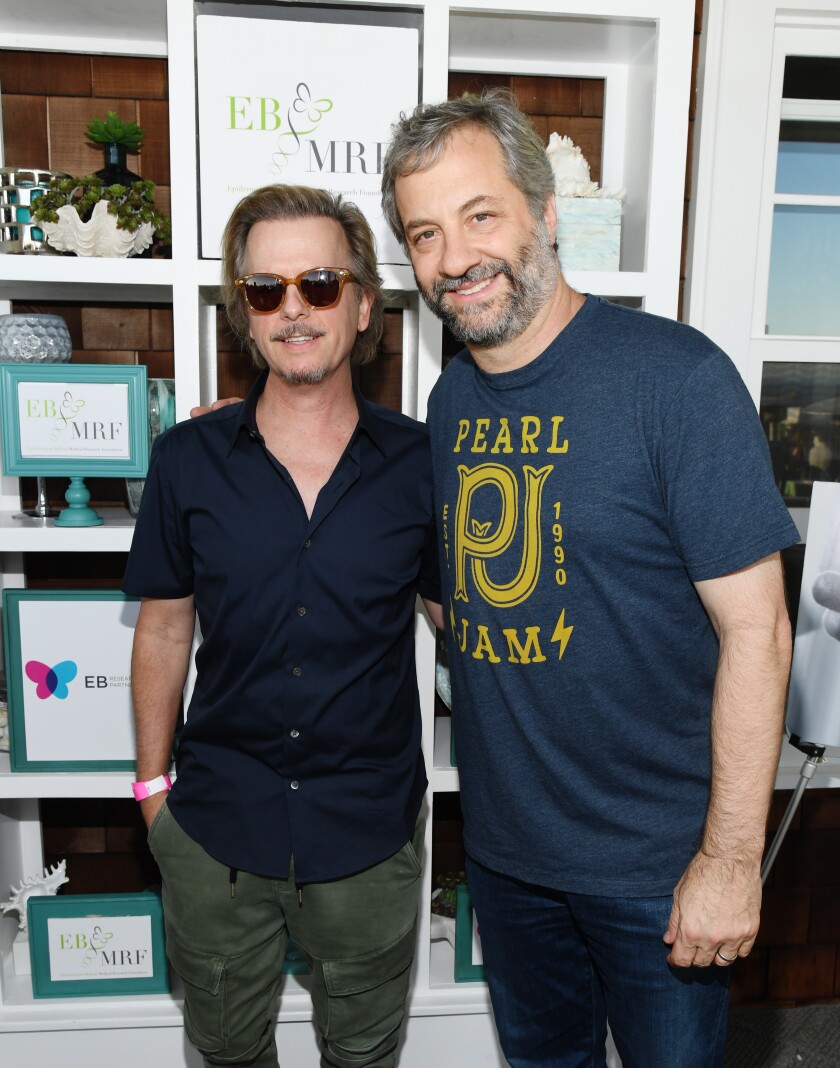 David Spade, left, and Judd Apatow attend Rock4EB! at a private residence in Malibu on Oct. 6, 2019.

Taking the microphone as guests settled into their seats for the show, Pett-Joseph said, “In a town where relationships can be fleeting, your support has never wavered, and that is not lost on us.”

Julia Roberts said she came “to be part of this incredible community of people, supporting each other and this important cause. The thing that’s always surprising is how many people don’t know anything about this [disease].”

“I’ve always said, ‘If I’m in L.A., I’m coming to this event,” Malek said. “It’s an important cause and something people need to understand.”

“I try to come every year,” said Judd Apatow, wearing a Pearl Jam T-shirt. “It’s a really important charity, and with Adam and Eddie, it’s a dream show for me personally.” 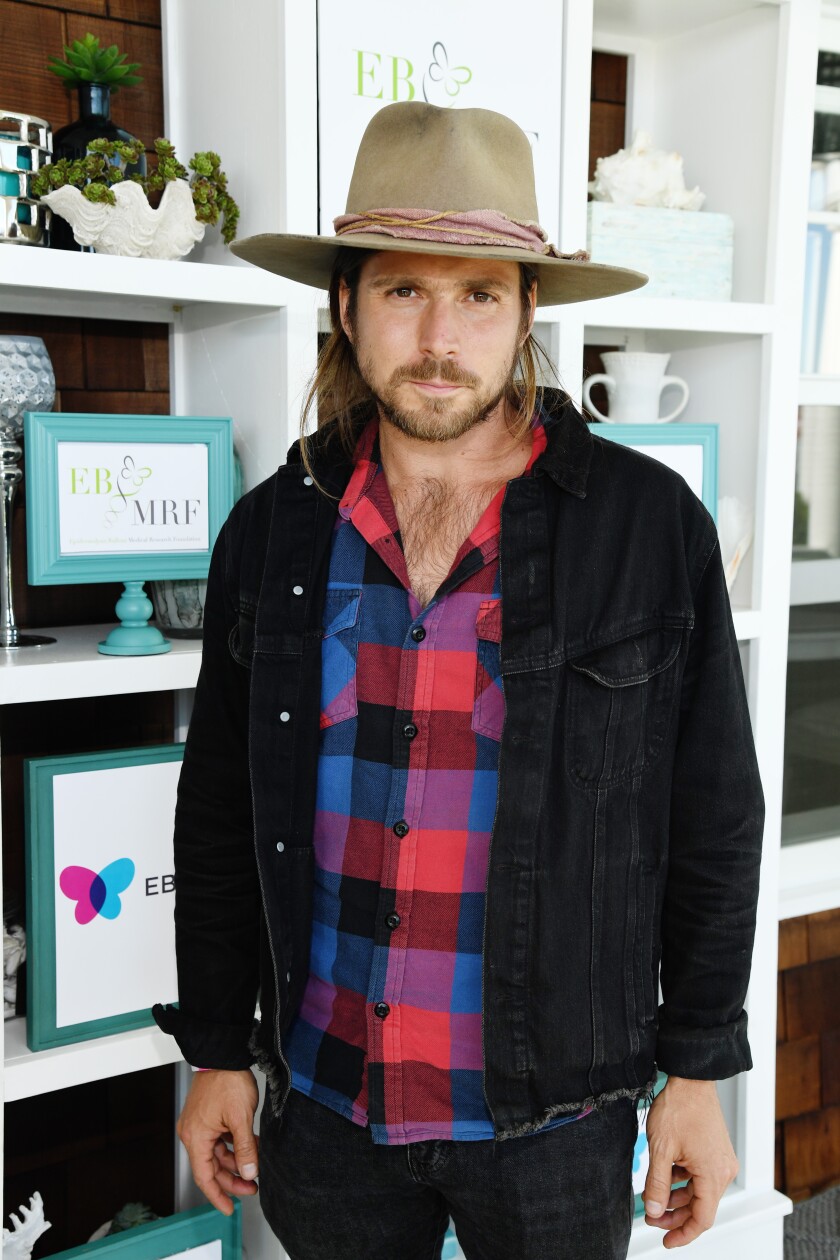 Lukas Nelson at the Rock4EB! event.

More than 600 guests bought tickets ranging from $1,200 each to $25,000 for eight reserved seats, with proceeds going to the Epidermolysis Bullosa Medical Research Foundation and the ​EB Research Partnership.