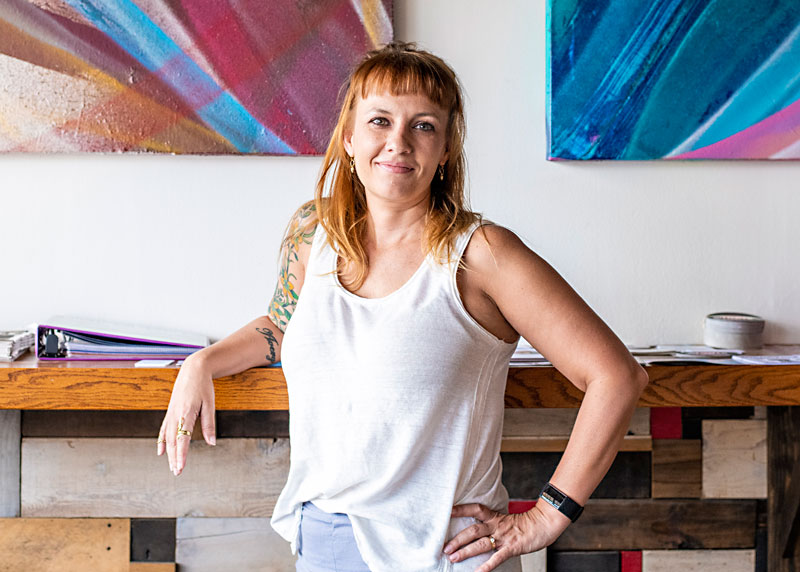 Long before the concept of expanding the convention center became the hotly debated civic issue it is today, music advocate Rebecca Reynolds had her eye on a specific bucket of city funding – she just wasn’t sure how to get it yet.

The target: hotel occupancy tax (HOT) funds. Collected from visitors, the third-largest source of city tax revenue currently benefits nonprofit arts groups exclusively – the commercial music industry doesn’t see a penny. Under Reynolds’ leadership, a coalition of music supporters, Music Makes Austin, now pushes for a major funding shift that would finally get them a piece of the HOT action.

“State statute says hotel tax funds are supposed to be going to primary drivers of tourism, and in Austin, that is our music industry,” Reynolds explains, noting there are no laws preventing HOT money from going to commercial music. “The fact that we have not been getting any isn’t fair. In fact, it might not be legal.”

Back in 2017, efforts to adjust HOT divvying led to the creation of a Visitor Impact Task Force. Enter the convention center expansion idea, approved by the task force and later, City Council. The project would enact a 2% tax increase for hotel customers, 15% of which could be spent on the arts. Music Makes Austin pushes for these newly unlocked funds to support commercial music, with Reynolds calling it music’s only path to get HOT funds without taking from an existing arts group’s piece of the pie. 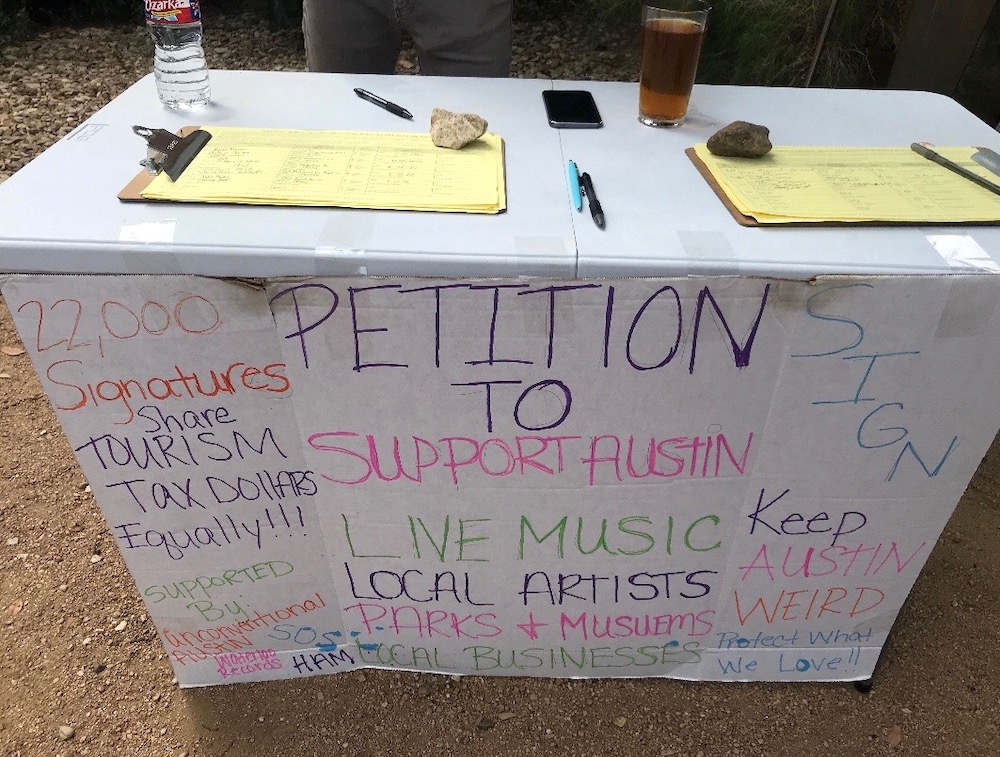 A photo provided to the Chronicle of a table set up to collect signatures for Unconventional Austin’s petition.

The handwritten signage included Waterloo Records, whose owner John Kunz has supported the petition, as well as Health Alliance for Austin Musicians, who have not expressed support. A HAAM representative tells “Faster Than Sound” they plan to request that Unconventional Austin remove them from marketing materials. Cowan, former general manager of Mohawk, says the PAC did not contact the Red River Cultural District before launching the petition.

“The fact that they’re saying that the convention center growing will kill music is absurd,” says Cowan. “What’s going to kill music is doing nothing. A Hail Mary is better than sitting on our hands and waiting to get evicted. Downtown is going to grow with or without music, so we want to be in the conversation.”

His continued opposition to convention center expansion is echoed by Unconventional Austin’s Lucas Burdick, writing: “These colossal convention centers are money pits. McCormick Place in Chicago, the largest convention center in the country, lost $94 million in 2016, and the Austin center’s losses keep increasing. So it stands to reason that a larger center will have larger losses in the future, and soak up more and more HOT revenue.”

One Small Step for Sound Enforcement

Say you’re working at a business where music plays, and someone calls in a sound complaint. An Austin Police Department officer will show up, and if the sound issue can’t be resolved informally, a citation can be issued for the violation. Under current procedures, examined in a study commissioned by the Economic Development Department, these citations can end up addressed to “a low-level employee or a manager.”

According to a June 4 message from the EDD to the mayor and Council, work is underway to ensure citations are made out to venue owners, not unlucky employees.

The study, conducted by the Responsible Hospitality Institute, emphasizes: “The path of sound citations in Austin is long and winding, and does not necessarily impact the correct person. … Citations are issued to individuals and can create a criminal record that may impact employment, credit rating, and application and renewal for liquor licensing, among other things.”

Next steps include meetings to create a new procedure for issuing citations. The department aims for late summer or early fall, and plans to host a venue summit to inform the music community.

Various music venue owners told the Chronicle sound citations are not typically a problem, although they do end up in municipal court for other violations. Instead, it’s often bars and restaurants with music who receive complaints. Still, Red River Cultural District Merchants Association Executive Director Cody Cowan says the tensions get blamed on live music as a whole.

“The only people who take enforcement seriously are venues,” says Cowan. “I’ve literally heard stories of bars tearing tickets up and throwing them in people’s faces. The owner should be held accountable because it’s their job to manage the business.”

The new process, which is good to go following administrative organizing, precedes larger overhaul plans based on stakeholder feedback. According to the Amplified Sound Compatibility Engagement survey, respondents favored passing enforcement duties to the Music & Entertainment Division, rather than APD. 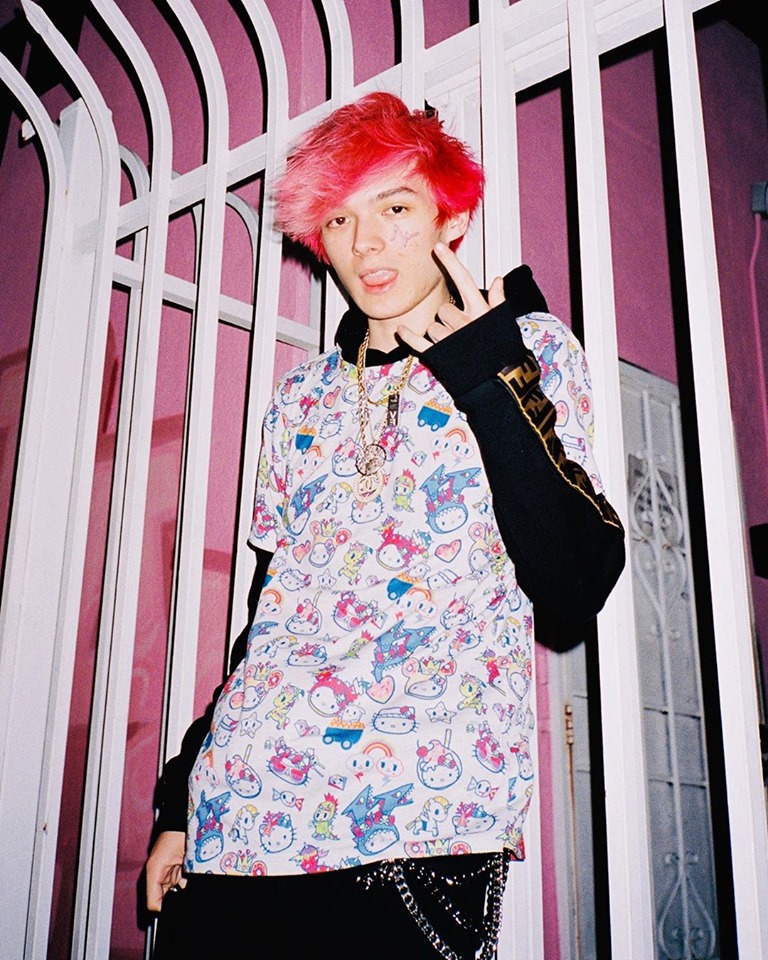 Austin-launched rapper Jacob Tyler Thureson, aka Hella Sketchy, died Thursday, June 27, following a drug overdose. His father revealed, via Twitter, that the 18-year-old had spent two weeks in a coma before passing in Los Angeles.

Thureson moved to Austin with his family in 2013, where he began producing beats. Jacob’s mother Judy, who attended Jacob’s memorial in Zilker Park on Saturday night, remembers his early shows with Austin acts Mason Flynt and Yung Bambi.

“When we moved to Austin, he didn’t have many friends and was home-schooled,” she says. “He taught himself how to make music in his bedroom, and ended up becoming a producer and artist.”

Hella Sketchy moved to L.A. after signing with Atlantic Records. In a statement, the label eulogized him as “an enormously creative, sensitive soul who was just beginning to show the world his talent and originality.”

The tragedy has emboldened Hella Sketchy’s father, videographer Erik Thureson, to produce a documentary on opioid addiction and mental health.

“The opioid epidemic does not discriminate,” he wrote on Twitter. “The conversation regarding drugs, depression, mental illness, social media, needs to be happening more openly without judgment and stigma.”