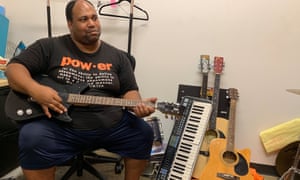 Los Angeles homeless advocates and Skid Row residents are mourning the death of a beloved guitarist who was killed when his tent was set ablaze in what authorities say was an “intentional” act.

The gruesome death of Darrell Fields, a 62-year-old musician who was well-known in downtown LA and worked extensively with a local advocacy group, was a particularly brutal representation of a severe and worsening homeless crisis in the region. The deadly fire Monday night came the same week that a scathing government audit found that LA’s top homeless outreach agency had dramatically failed in its goals to place people into housing.

“We are in a full-scale emergency,” said Kayo Anderson, a Skid Row advocate who was friends with Fields for years and played with him in a band. “We no longer have the luxury of walking at a snail’s pace to get this done. If Darrell was a housed person, he would still be with us. That’s an indictment of us all.”

Anderson, 42, has stored Fields’ guitars and keyboards inside his office at the Los Angeles Community Action Network (LA Can). “I can’t even express to you how genius he was,” Anderson said about Fields. “He was just brilliant and uniquely gifted … He was also a big-hearted human who wouldn’t hurt a fly.”

Prosecutors have charged Jonathan Early, 38, with Fields’ death, saying he intentionally lit Fields’ tent on fire while he was asleep in an act that “involved the infliction of torture”. It’s unclear if they knew each other or what the motive might have been.

Fields’ friends said he never got into conflicts with anyone, and they said he suffered as a result of the extreme lack of housing options for people like him in the city.

LA county’s official count this year found that there are now more than 36,000 homeless people in the city of Los Angeles, a 16% uptick from the previous year. Across LA county, more than 11,000 people are living in tents and makeshift shelters. There are also more than 5,000 homeless seniors – 80% of whom are unsheltered.

On Wednesday, the LA controller’s office said that the Los Angeles Homeless Services Authority (Lahsa) had missed five of its eight goals last year. Instead of meeting its target of placing 10% of homeless people they assessed into permanent housing, the agency only placed 4% of them, the audit revealed. Lahsa has said the controller’s report was “misleading”, that the agency had contacted “record numbers” of homeless people, and that there was not enough shelter space and housing to meet the demands.

Adam Rice, another LA Can organizer who knew Fields, said LA authorities have failed the homeless population. “Darrell had been on the street for so many years … Why are there not proper spaces for him to live and be safe? We need permanent housing – four walls, a door, privacy. This is a human right.”

Rice said he blamed the mayor, Eric Garcetti, and other local government officials for failing to create adequate housing options and instead spending significant money on police and practices that criminalize people living on the streets.

“There are not enough empty beds, even if everyone wanted to go into these horrific shelters,” said Angela James, LA Can’s deputy director of finance and operations, who said she greeted Fields nearly every day. “People don’t have a choice.”

She added that the city’s controversial sweeps, in which city workers clear homeless encampments, were a source of stress for Fields. She also noted that local lawmakers were focused on passing laws restricting people from living in vehicles and creating new limits on where people can sleep outside, which only exacerbates the crisis: “Where can they be? We’re basically saying, ‘It’s illegal for you to exist.’”

Alex Comisar, a spokesman for Garcetti said in an email that the mayor was “committed to saving lives by getting people off the streets and indoors as quickly as possible”.

‘He was a bright light’

Fields, whose legal name was Dwayne Fields, was a community fixture at Skid Row, friends said, often seen playing music on the street and performing at neighborhood events. 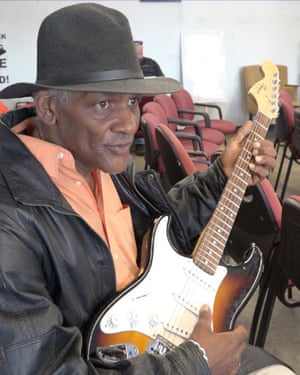 Darrell Fields was originally from Michigan. He lived in Los Angeles with his longtime partner, Valarie Wertlow. Photograph: Courtesy of LA Can

“He was known as ‘Mr Guitar,’” said Anderson, noting that Fields had just performed Saturday night at a fundraiser at LA Can.

Fields was originally from Detroit and Flint in Michigan and later lived in Las Vegas where he worked as a musician, said Anderson. He had performed in a Jimi Hendrix cover band, wrote his own music and loved singing blues and gospel.

“He was what I wish I could be,” said Sir Oliver, a local DJ who worked with Fields and recalled how skillfully he played a guitar that only had two strings on it. “He had so much talent, and everyone on Skid Row knew how good he was … How could this happen?”

Fields lived with his longtime partner, Valarie Wertlow. Both artists, they had moved to LA to find gigs, and eventually couldn’t afford housing, said Pete White, LA Can’s executive director. Fields landed temporary housing a few times, but never found a long-term housing option for him and his partner, he added.

“He helped me with my guitar playing,” White continued. “I’m heartbroken. He was this bright light and shining star that used art for healing.”

Fields was a regular presence at LA Can, said Anderson: “He was houseless, but he wasn’t ‘homeless’. This was his home.”

He added, “All that man wanted to do was love Valarie and play music. It was a simple, beautiful life, and he loved it.”