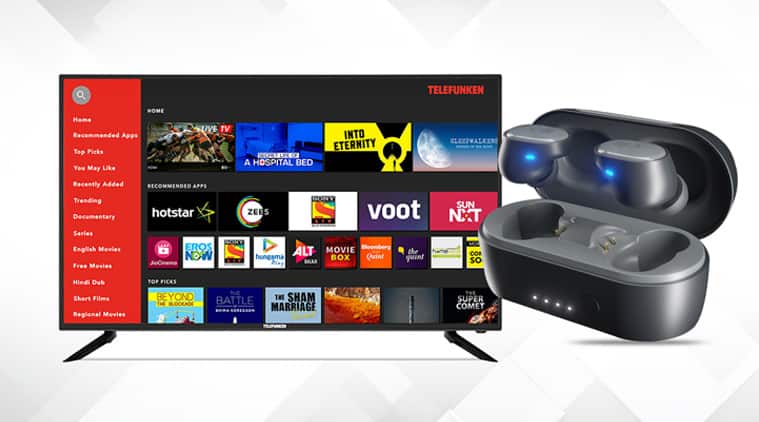 Here are the latest gadgets that have hit the Indian market this week. Read on:

Sony has launched two new audio products in India: the WI-XB400 neckband and WH-CH510 headphones. The Sony WI-XB400 neckband comes with a battery life of up to 15 hours and it has support for Quick Charge, with which it can charge for up to 60 minutes within 10 minutes. The company claims that the neckband comes with extra bass and deep bass music technologies. It is also compatible with the Google Assistant and comes with magnetic earbuds to avoid tangling. It is priced at Rs 3,990 and will be made available starting September 26 in Black and Blue colour options.

Coming to the Sony WH-CH510 on-ear headphones. They come with a battery life of up to 35 hours on a single charge. A 10 minutes charge can provide a battery life of 90 minutes. This is also compatible with Google Assistant. It is also priced at Rs 3,990 and will be made available starting September 26 in Black, Blue and White colour variants.

The company claims that the Skullcandy Sesh can deliver up to 10 total hours of battery life – 3 hours of battery in each earbud and 7 additional hours in the included charging case. The earbud comes with a single-button interface that provides quick access to a full suite of media controls for music, microphone, calls, and the device assistant.

The Skullcandy Sesh comes with an IP55 rating that provides sweat, water, and dust resistance. It is available for sale across Skullcandy’s official website Skullcandy.in and at select retailers.

The new Telefunken TVs have a resolution of 3840×2160. They come with the Quantum Luminit Technology which is fused with HDR 10 to enhance the reds, greens and blues that increases the range of light and expands the brightness and contrast. It also comes with 4K HDR10 and 20W built-in box speakers.

The Telefunken 4K Smart TVs also have Content Discovery Engine (CDE) which let the users search their favourite content across the OTT apps right from the homepage.

The TVs run Android 7.0 and come with 1GB of RAM and 8GB of ROM. They have multiple connectivity options including three HDMI, two USB, an HDMI ARC, Optical Output etc. which allows the user to connect to their favourite set top box, gaming consoles, USB, high-end soundbars/AV receivers etc.

The Telefunken TVs are equipped with surge protection for power fluctuations and protect itself from overheating and excessive moisture. The TVs are now available with Amazon India.

Claw has launched its G9 Gaming Earphones in India. The Claw G9 is priced at Rs 990 and is available in three colour options – Black, Green and Red.

The Claw G9 earphones come with dual noise-canceling microphones, there is a detachable boom mic which can be adjusted 360 degrees. It comes with 10 mm drivers which produce 3D stereo sound with enhanced bass.

The G9 earphones come with dual flange ear-tips which help in noise isolation while the silicone ear hook design provides a secure fit in the ears. The earphones come with 1.2 m cable which has a rugged textured TPE material. There is a 3.5mm gold-plated plug that has a 45-degree angle. It also includes a 3.5 mm to 2 x 3.5 mm PC adapter.

The Claw G9 earphones come with a multi-function button that lets users control actions such as Play/Pause, Answer/Reject, Previous/Next Track and even bring up Voice Assistant.

FiiO has launched its M5 Hi-Res audio player in India. It is available for purchase from FiiO’s website at a price of Rs 8,990. The device is powered by Ingenic X1000E processor, which the company claims is a low-power consuming chipset.

The FiiO M5 comes with AKM AK4377 DAC along with the support for native DSD. It decodes of both PCM and DSD formats. The M5 also comes with Qualcomm’s Bluetooth chip CSR8675. There’s a dedicated multi-channel power management chip AXP192.

The device has a dual-microphone design and cVc noise cancellation technology for calls. It supports micro SD cards up to 2TB. the audio player has seven equaliser presets – rock, classical, jazz, pop, dance, vocal, and metal.